Ubisoft has revealed new details surrounding an "operator system" for Rainbow 6 Siege as well as information on the game's newly-revealed Collector Edition.

Rainbow 6 Siege was a standout game at last year's E3, pitting a team of extraction and rescue operatives against a team of baddies where one side's job is to infiltrate, kill and rescue, and the others is to hunker down and effectively defend. A heavily destructible environment and defensive items in close-quarters with traditional Rainbow 6 gameplay make the game a tantalising prospect in the competitive shooter space, and now Ubisoft has revealed a new "operator system".

Operators are specialists from the world’s top Special Forces units and masters in their respective fields. Each has their own unique expertise which adds a new tactical layer to the Siege experience and pushes team play even further. Players will put together these operators to create their best CTU (counter-terrorism unit) composition and defeat the opposing team.

Players can go deeper into details with the new episode of Behind the Wall featuring an in depth look at the Operators.

You can also check out a gameplay trailer featuring operators embedded below.

The Collector's Edition of the game can also be seen below and will feature a collector's box, a skins pack for in-game weapons customisation (cosmetic) as well as a 120-page Tactical Guide to the game.

This high quality guide includes every single key element of the game – detailing each Counter Terrorist Unit, Operators, weapons, and maps with the highest level of detail and statistics. All this content has been created with the developer team and core gamers’ advice, giving you the most effective results in the field.

You can pre-order the game at the moment from the Uplay Shop. 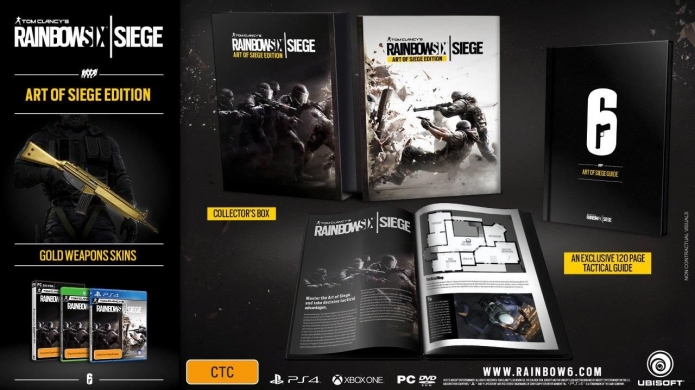