When the news dropped that some of the ex-Rare guys who were there during the glory days of the N64 were forming a new studio to create what was ostensibly a spiritual successor to Banjo Kazooie, both Steve and I immediately turned into a pair of “staring off into the distance whilst smiling” idiots. You see, we’ve been Nintendo fans for a couple of decades now, and once upon a time wrote about games like Banjo Kazooie for a local magazine called Nintendo Gamer.

So yeah, it was hard not to get swept up in a wave of 3D platforming nostalgia when thinking about the prospect of playing Yooka Laylee in 2017. Naturally, a lot other people felt that way too. With Yooka-Laylee quickly breaking all UK records for crowdfunding, and the project getting the backing it rightly deserved. If only to rekindle that sorely missed love for the somewhat forgotten 3D platforming genre. 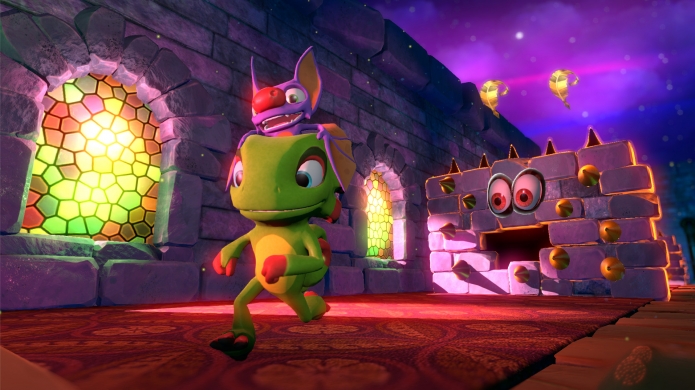 And now, after spending several hours with the final version of Yooka-Laylee, collecting Pagies and Quills and Ghost Writers in vast themed 3D worlds, we can safely say that the game is more “Banjo sequel with an entirely new cast of characters and collectibles” than “spiritual successor”.

Which is both good and bad.

But regardless of its few missteps, Yooka-Laylee is a modern-day 3D platformer well worth playing. A triumph even. It captures the essence, humour, design, and mechanics of a late ‘90s platformer called Banjo Kazooie right down to having any and every object you can interact with talk to you in a jumbled squawk of mumbled, cute, and often annoying sounds. Plus, it features some great platforming set pieces and music worthy of a hypothetical Cartridge Hall of Fame.

From navigating the menu to that first moment you take control of both Yooka and Laylee, it’s hard not to shake the sense that you’re playing a game from a different era. Bright worlds to explore, colourful characters to talk to, tongue in cheek humour that could only come from the UK, and pun-driven puzzles by the truckload. And all presented to you in Banjo Kazooie-vision – with identical fonts, layouts, transitions, and that unmistakable art style first seen in the 64-bit era classic. Whether or not the Banjo formula works as well today as it did in the late-‘90s is something you’ll need to figure your for yourself. After all, I’m the sort of person who could just as easily fire-up the HD re-release of Banjo Kazooie annually. And wilfully ignore all faults with its design. 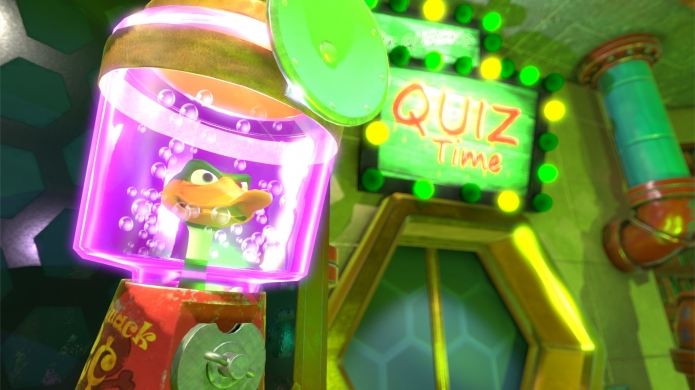 Yooka-Laylee shines brightest during the moments where its elements feel like they could have just as easily worked as well in Banjo Kazooie. Where Yooka-Laylee falters though, and you can chalk this one up to personal taste, is in its too broad of a scope. Playing the game can at times feels a little overwhelming, and the sheer number of different directions you’re being pulled works against the simple core of what makes a good 3D platformer. Also, some of the locations feel too sparse and big to be memorable, one-time mechanics and mini-games can vary wildly from fun and engaging to merely functional, confusing, and well, boring. As a direct comparison to Rare’s output for the N64, it’s more Banjo Tooie than Banjo Kazooie. A sequel that expanded on almost every aspect of the original, and in the process lost a notable portion of its charm.

Okay, so that’s the negative paragraph out of the way. And once again for the record Yooka-Laylee is a lot of fun to play, and quite funny too. It’s just that not a lot of it feels new or refreshing. Which is strange when you factor in the number of years that have passed since we’ve had a game like this. As a genre that has all but disappeared in recent times, a shining example of being inventive and varied whilst not overwhelming or confusing the player would have to be the excellent Super Mario Galaxy series from Nintendo. In many ways Yooka-Laylee feels like a game from a world where Nintendo didn’t move the genre forward with Galaxy, instead, existing in a weird time bubble where it’s the year 2000 all day every day. Albeit one with a shiny coat of HD paint.

Again, and this time structurally speaking, Yooka-Laylee is very much Banjo in new clothes. There’s a sprawling overworld to explore where new moves open the door to new areas and subsequently new Tomes to visit. Tomes being the large in-game books that act as Yooka Laylee’s version of Jigsaw Puzzles -- i.e. the gateways to new worlds. With only five worlds in the game you might think Yooka-Laylee would err on the short side, but much like Banjo Tooie the levels here are both massive and visually distinct from each other. Where Yooka one-ups the Banjo sequel is by giving players the option to expand each world with Pagies after they’ve played around in the base version, as to reduce the sense of being overwhelmed with the decision of where to go and what to do. It’s a great addition to the formula and one that helps Yooka-Laylee from falling into some of the traps that plagued late-era N64 platformers from Rare. 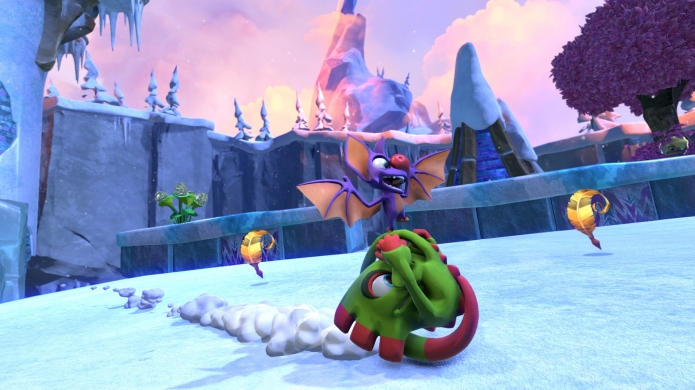 But again, it’s all wrapped in a package that borrows heavily from its roots. And in the process, there are some mechanics lifted from Banjo Kazooie that simply don’t feel like they belong, like the Mad Scientist who offers transformations along the lines of Mumbo Jumbo. In the Yooka-Laylee’s first level, Tribalstack Tropics, being transformed into a plant gives you the ability to speak to other plants which offers up new puzzles to solve and Pagies to collect. It’s fun, thematic, and works in the context of the smaller intricate design of Tribalstack Tropics. In later worlds being transformed begins to feel more like a chore, with vast open areas that you’ll first need to run around a few times just to figure out where you might need a snow plough or a sentient helicopter. It’s the sort of design that plagued a number 3D platformers back in the day, where collection fatigue and the desire to create larger and bigger environments amplified the feeling of running around in circles. Which makes it harder for each new world or level to capture the player’s imagination.

Yooka-Laylee certainly falls into this trap, save for a great sci-fi themed trip late game that reinvigorates the adventure during the home stretch. It also falls into the trap of having a wildly varied camera system, leading to situations where trying to wrangle the camera angle, becomes priority number one. But, at its core Yooka-Laylee features solid 3D platforming, all wrapped-up in a charming and funny package that oozes with the quality that drew a lot of players to Rare’s output during the N64 era. And although this may sound like strange criticism, we would have preferred it if the game featured fewer ideas, smaller worlds, and a more focused design. Yooka-Laylee’s better moments far outweigh its troublesome ones, and for the most part you’ll feel like you’re playing a Rare platformer from the year 1999. And when that’s what Yooka-Laylee promised to be, you can’t fault it for delivering on that promise. Warts and all.
Latest Comments
Link