In my opinion, WWE has had two boom periods. The first was back in the 1980s with Rock n’ Roll wrestling with Hulk Hogan and co. -- the product was cartoony, and aimed at kids. The second was during the mid-90 to the 2000s, when WWE and WCW were involved in the Monday Night Wars, or as it’s otherwise known, “the Attitude Era”. The kids had grown up, and the WWE altered its product from a family-oriented presentation to one that was more risqué and catered to a more mature market. This was the beginning of the Attitude Era for the WWE, and it introduced us to Stone Cold Steve Austin, The Rock and Degeneration-X.

During this time, there were many momentous moments, and WWE ’13 features many of these matches in the new Attitude Era Mode. For me, the inclusion of the Attitude Era Mode, which replaces last year’s rather dull Road to Wrestlemania Mode, is the highlight of the game. It allows me to relive and replay some of the greatest matches and moments in WWE history, and the game does a fantastic job of recreating these moments, down to the smallest detail. The entrances, the arenas and even the television graphics from that time have been recreated. The game features many of the wrestlers involved in the storylines from that time, with several of them in their attire from that time. For instance, Triple H will appear as Hunter Hearst Helmsley complete with his fancy entrance music to begin with, but then will transition into Triple H with the D-X entrance. This is the same for wrestlers like the Rock and Undertaker who went through major character changes during that era. 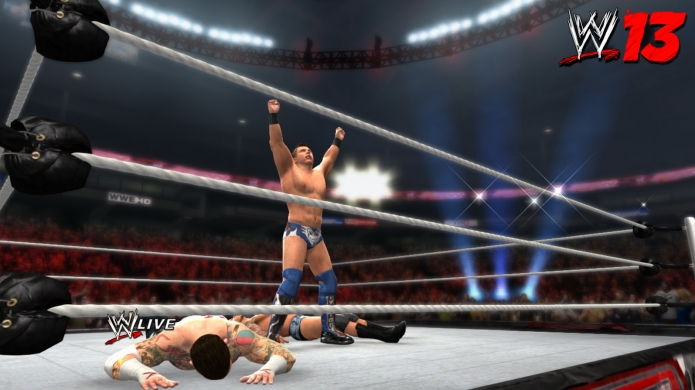 The Attitude Era Mode has six chapters, plus one bonus chapter called “Off Script”, which is a reward for completing the previous chapters. The chapters in the mode will focus on wrestlers during the Monday Night War period, so the game includes wrestlers such as Bret “The Hitman” Hart, Shawn Michaels, Mankind/Cactus Jack/Dude Love/Mick Foley and The Undertaker. Each chapter focuses on specific storylines from that era, and each of them varies in length. You begin with the “Rise of DX” chapter which chronicles HBK and HHH coming together to form DX, which signalled the start of the Attitude Era. As you progress, you’ll have the opportunity to partake in some historic matches, such as the Montreal Screwjob or the Hell in a Cell match between Mankind and Undertaker. Each match has certain historic objectives to complete, such as throwing Mankind off the top of the Hell in a Cell cage, which then rewards you by unlocking items. The game goes as far as including cut-scenes, sound bites and commentary from that time, to allow the player to immerse themselves in that era.

The other mode in WWE ’13 is the returning Universe Mode. This mode allows you to play through seasons of RAW, Smackdown and WWE Superstar TV shows as well as Pay-Per-Views, letting you alter matches and its participants. The mode includes all the plot twists, ring run-ins and blind side attacks that make WWE programming fun to watch. It’s a different option to playing the Attitude Era Mode, as it is open to how you want to play. This allows you to try out some of the new match types that are included this year, like the I Quit and Special Referee matches whenever you want.

The Universe Mode is also a good for trying out all the wrestlers, and WWE ’13 features one helluva collection of WWE Superstars. There’s a nice collection of modern day stars such as John Cena, Wade Barrett, Daniel Bryant and CM Punk along with classic stars like X-Pac, Ken Shamrock and British Bulldog. Like in previous years, there are many names missing from the roster, which hopefully will be rectified with DLC, but I was disappointed with the Diva’s roster, which includes several stars that aren’t with the company anymore, but is missing probably the biggest name in the Diva’s division, and who should’ve been available from the get go, AJ Lee. 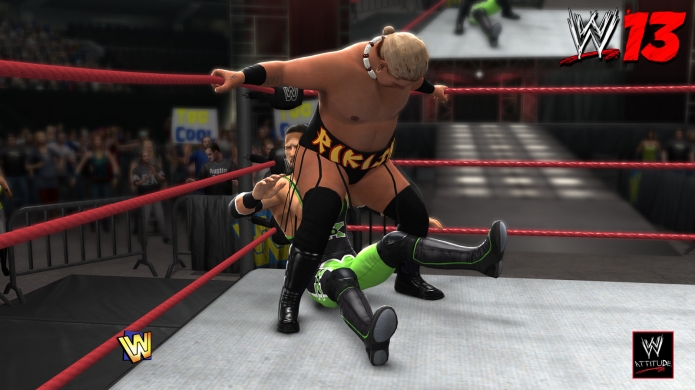 WWE ’13 also includes an updated engine, the Predator Technology 2.0. It allows for a much more realistic and fluid animation, and does make a difference with a lot of the collision detection problems from past games. Unfortunately, there are still lingering problems here, especially when it comes to foreign objects. In one instance, a ladder was introduced to the match and somehow got caught in the ropes, glitched out and went nuts. Other areas that I encountered problems was when attacking from the top rope, I would miss my target completely when they were knocked out on the canvas. Another area that unimpressed me was the camera angle. There were a few instances where it would become difficult to see the action due to the referee getting in the way or in cage matches where the cage would hinder the view.

The control system in WWE ’13 is easy to use and understand, and it’s impressive that so many moves can be executed from such a simple system. I was especially impressed with the reversal system, it isn’t as frustrating as previous games and it provides you with feedback on whether you’re too early or late, so you make corrections. The game includes a cool feature called the “OMG! Moments” that allows you to use one of your stored Finishers to execute environmental moves on barricades or the announcer’s table.

The new Attitude Era Mode is enough of a reason to play WWE ’13, especially if you were a fan during that time period.
Latest Comments
Link