Being an official title means official rally tracks, rally cars, and happy smiling portraits of official rally drivers and co-drivers. Official apparently also means budget, which can be seen in WRC 7’s merely functional UI complete with “inspirational” elevator music. The cars are well detailed, but that's about it. The tracks and surrounding environments look flat and samey, created by a team that has only been told what the Australian bush looks like. I've seen more realistic set backgrounds in olde timey movies. And in that Simpsons episode where Bart moons the Prime Minister. 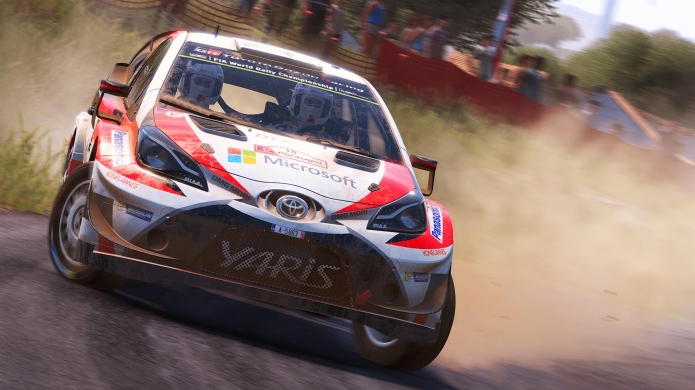 In WRC 7 your rally career begins and ends in the Championship mode, where you run through 13 rallies in a series of three-day events across all locations. You have a pit crew that repairs your car at the end of each day, whose morale can be monitored with a gimmicky meter that goes up when you win and down when you lose. Which has no inherent value other than being able to get a digital readout of digital emotion. One thing that is weird though, that you’ll notice whilst racing, is that at no point  are you informed of your progress versus your fellow competitors.

Start in the Junior league, win races to progress, you know the drill. It's dull, in a straight up win races in a racing game kind of way. And so, there’s a lot more fun to be had straight up racing in Quick Game. Where random settings offer the most surprise and challenge. Press a button for a random track, randomise the so-called "weather", and also the time of day. Hit random again for the car and drivers, seriously there's no real difference between them, and then start racing. 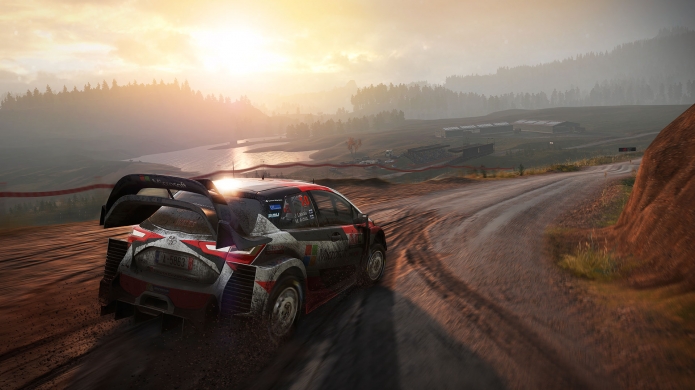 There are three vehicle categories, differentiated by horsepower: Junior WRC, WRC, and WRC 2. Within each category there's an official rally Ford Fiesta, a Citroen, a Hyundai and so on. The only thing setting them apart are aesthetics, so choice of vehicle is limited to livery and the driver portraits. The cars all sound the same, have the same chassis with the same pieces of plastic just waiting to fall off, and they all handle the same arcadey way on the track. This is a direct result of the game's official status, limiting vehicle choice to official WRC rally cars. Which then flows onto the overall scope, and unfortunately that means there are no buggies, T4 rally trucks, or ATVs. Love those guys.

Thankfully there's a lot more variety in the tracks than the cars. Mexico offers treacherous mountain stages that has you dipping your wheels over cliffsides as you negotiate Ibarrilla. Pietrosella Corsica has more hairpins than a drag queen and requires judicious and frequent applications of the handbrake. Barcelona has the most insane road special stage I've ever seen, which will leave your tyres in shreds by the time you're done. If the physics modelling was that deep. Which it isn't. Germany if full of forests, as is Wales (but wetter and muddier), and the cars look suitably filthy as you cross the finish in slooooow moooootion. There's snow in Monte Carlo and Sweden, but interestingly no ice tracks. 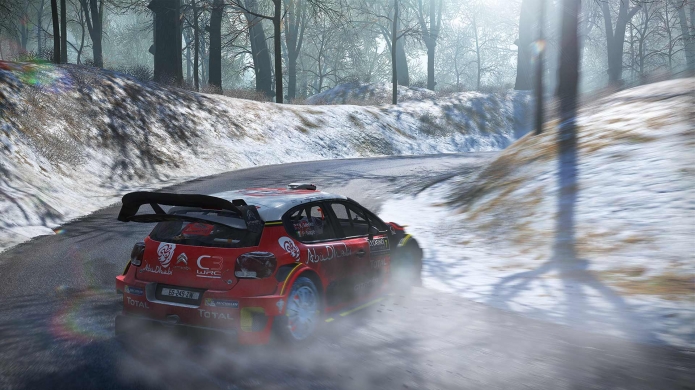 The tracks are all tight and leave slim margin for error, with twists, turns, and jumps coming almost faster than the co-driver can announce them. Switch on Detailed directions and he'll stream a never ending monotonous monologue, one that you might just tune out preferring instead to quickly glance at the  on-screen signs. It might help if the co-driver sounded like he was actually talking on his headset whilst seated next to you, rather than comfortably sedated in a sound booth a thousand miles away.

Damage results in reduced handling and speed, as well as pieces of the car left behind to the delight of the hordes handfuls of spectators. For a bit of fun, and with great determination, I set out to destroy my car to such an extent as to render it useless. At its worst the damage system ensures that a car will remain driveable, albeit in 3rd gear only. Funny sure, but easier to switch to visuals only damage and have a good chuckle when you watch your roll cage on wheels cross the finish line. Again, slooooowly. 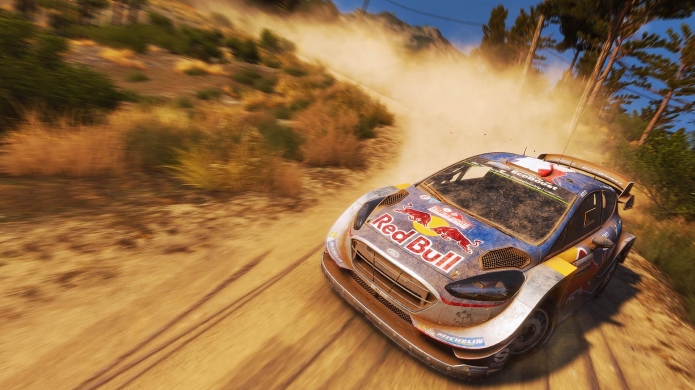 With its lineup of indistinguishable cars, bland Career mode, and the more enjoyable but limited Quick Game, WRC 7 presents few reasons to justify its price tag. It's fun for a quick bash sure, but for similar expenditure you could be playing Forza 7, Project Cars 2, or the literally billions of other racing games on the market.
Follow Us
Latest Reviews
More...
News Feed
Advertisement
Latest Threads
Log In
Create Account | Lost your password?