There’s something that feels special and a little different about scoring a direct hit on a hulking World War II-era Battleship spotted and situated over 10 kilometres away from your current location. Lining up the shot, aiming ahead of the bow, factoring in its relative water-speed, waiting for your own artillery guns to get into position. And then… fire.

Bonus feels if the Battleship then manages to catch fire from the explosive shells you just lobbed in its direction. 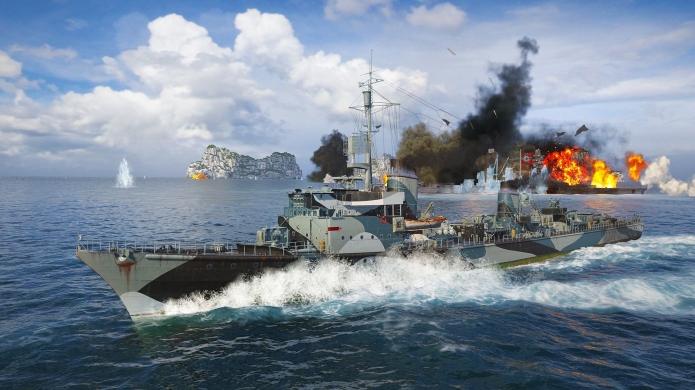 From Wargaming, the studio behind the long-running World of Tanks, World of Warships: Legends presents the console version of the game now available on PlayStation 4 and Xbox One. Out of Early Access and presented in shiny, polished Version 1.0 form. The Legends affix at the end may sound confusing, but in execution it means a more streamlined version of World of Warships. Fewer overall ships and tiers than those found in the PC release, three classes instead of four, smaller maps, and 9-v-9 battles instead of 12-v-12. That said it doesn’t lose the sense of scale, and the impressive tactics that feel unique to World of Warships. Even when compared to Tanks. It’s the same relatively fast-paced arcade action as found on PC, and visually it looks all but identical once you’re out there on the water.

As with World of Tanks, you don’t need to be a naval history or World War II buff to get the most out of the game. Instead its charm and simple to learn mechanics will have the opposite effect, make you wonder why you just fell in love with a ship from the first half of the 20th century. A Cruiser that goes by the name of Omaha. Jumping into World of Warships couldn’t be easier, with the game opening with simple co-op versus AI engagements before introducing more ships, PvP battles, the Commander system, Campaigns and overall progression. 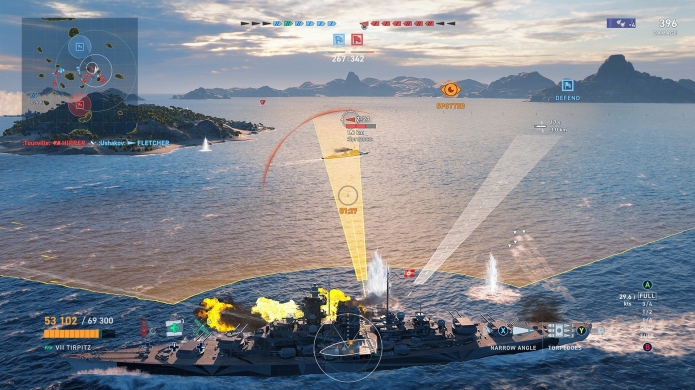 Initial impressions present an experience that is basically the boardgame Battleship filtered through the lens of a real-time PvP shooter along the lines of Battlefield. Capture and defend points on a battlefield, reduce the opposing team’s ticker count to zero, take out as many ships as you can with either artillery or torpedoes. Be the victor, sail away with the spoils. Always remembering the motto: avoid getting hit by torpedoes from approaching Cruisers and Destroyers. Doing it all on large bodies of water, sailing between islands, separates Warships from the pack.

“Initial impressions present an experience that is basically the boardgame Battleship filtered through the lens of a real-time PvP shooter along the lines of Battlefield.”


There’s nuance to be found, especially with how the three classes of ships behave. Destroyers are quick and nimble, hard to hit, but unable to survive for long after a barrage of shells meet their hull. Cruisers present the middle ground, bigger and more badass in terms of sheer firepower, and just about fast enough to go toe-to-toe with Battleships – if they have the upper hand in terms of surprise and positioning. Finally, the big boys, Battleships are massive and slow, but made of the stuff that can withstand a shellacking or two before things become critical. Within each of these classes the individual ships will vary across a range of stats too, and you’ll be able to upgrade their loadout, and even assign Commanders – each with their own abilities. 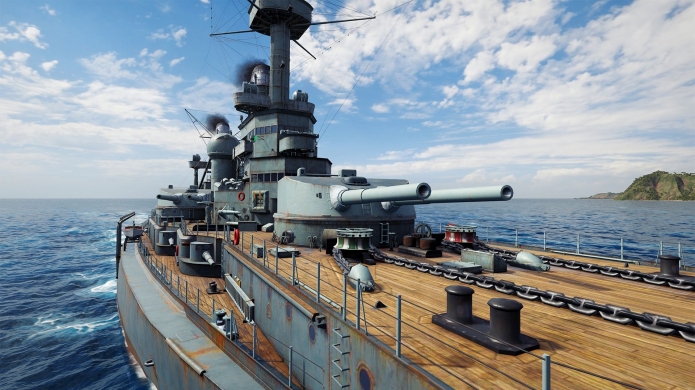 And then of course there’s the visual look and general style of say U.S. ships versus Japanese vessels, and those from Nazi-land. Or across the pond, floating there off the coast of the King’s England. As a free-to-play title, there’s a lot of generosity to be found in the ships you’re initially given access to as well as with the ability to purchase new ones with in-game currency and progress through the tiers as you gain experience after each battle. All without even knowing what real-world currency will get you.

This in part is helped by the new Campaign system implemented at launch, which adds a long list of challenges to work through offering up rewards and boosters and other goodies. At 100 levels of progression it feels a tad monumental and almost insurmountable in terms of being able to complete it within a month or so - but it plays into the pick-and-play nature of World of Warships. Once it has you, World of Warships takes on a go-to quality – where a quick 30-minute gaming session will have you firing it up to play through a few bombastic rounds of high seas warfare.

Of course, the amount of experience required to progress a Commander or level-up a ship increases dramatically over time, but the approach here is just-about completely removed from pay-to-win. And really, after sinking in dozens of hours into World of Warships spending some money on a Legendary Ship feels fine. The cheaper ones that is – some of the more expensive ones do err on the side of extravagant.

“As a free-to-play title, there’s a lot of generosity to be found in the ships you’re initially given access to as well as with the ability to purchase new ones with in-game currency and progress through the tiers as you gain experience after each battle.”


In terms of overall performance World of Warships on console is a technical success, offering up fast load times, a stable frame-rate, and support for stuff like HDR. As a full 1.0 release there are still a few things in the translation to console that feel like they need a bit of work. The UI and overall presentation are functional more so than they are stylish. Lacking any real animation, the Commanders are mostly static, voiceless, and rarely feel integral outside of the bonuses they offer. Which is a shame because one gets the sense that Wargaming was hoping that their inclusion and prominence in Legends would present a more personal and character-driven image for the console version of the game.

In the end though World of Warships: Legends is impressive, thanks to it excelling where it matters – brilliant performance, excellent controls, and streamlining that doesn’t noticeably cut into what made the game so much fun to begin with. Out on the water, in command of a large sea beast – reveling in a style of warfare we don’t often get to see. A simple premise that moves beyond the shallows, and into deep waters.
Latest Comments
No comments currently exist. Be the first to comment!
You must be logged in to post a comment. Log in now!
Follow Us
Latest Reviews
More...
News Feed
Advertisement
Latest Threads
Log In
Create Account | Lost your password?