For the full review of the campaign and the PC version of Wolfenstein II, click here.

Wolfenstein II: The New Colossus has finally made its way to the Nintendo Switch, and just like the excellent DOOM port we got last year it looks amazing and other at times it’s just too blurry. To the point where you need to fill in the blanks by drawing on earlier memories playing the game on a high-end PC.

Is that Vaseline on the lens?

Regardless of the few issues, Wolfenstein II on Nintendo Switch is mostly a technical marvel. As with DOOM for the Switch it employs a dynamic resolution but rarely if ever hits the targeted 720p. Often it drops well below this to maintain the 30-ish Rocky-solid Balboa frames-per-second of its presentation. Outdoor areas are the worst affected and even result in dropped frames, dipping into the low-20s. Motion blur helps minimise this to keep it all feeling smooth.

Most of the time it looks and plays great, with most effects from the PC/console versions in-tact. Depth of field, advanced lighting, and dynamic shadows. Even the insane geometry and environmental detail is here. Some of the more advanced effects, like screen-space reflections have been turned off, but the most impressive visual effect - particles seen when melting doors and Nazis with your Laserkraftwerk is here. Albeit with the number of particles reduced. Clearly developer Panic Button has a keen grasp on what to prioritise when porting more visually intensive games to Switch - and the results speak for themselves. 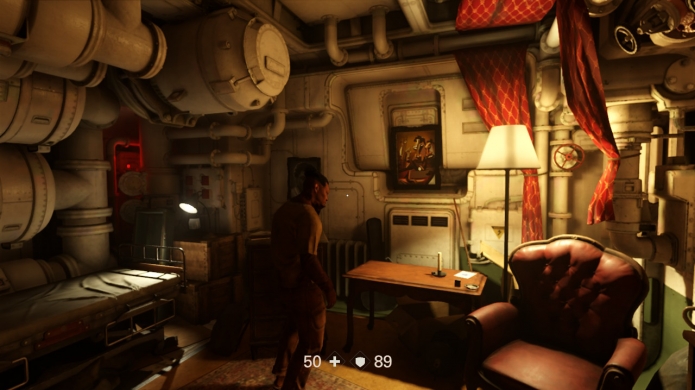 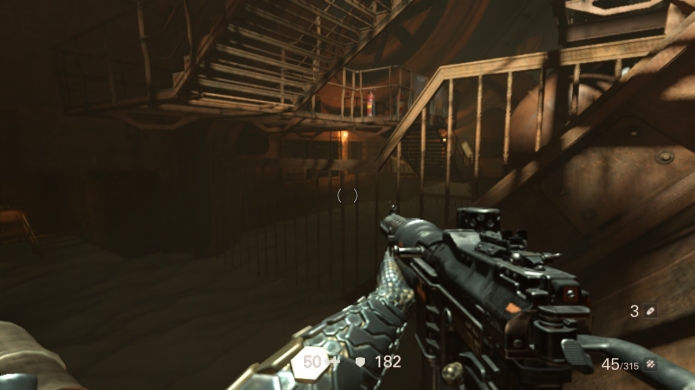 Even though performance takes a slightly bigger hit when played in handheld mode - it’s here where Wolfenstein II shines brightest on the Nintendo Switch. One of the most visually impressive releases of the past year, playable on-the-go and looking quite impressive too. The smaller screen offsets the lower resolution, and during certain sequences the quality of the port can be stunning. Also the heavily compressed pre-rendered cutscenes are less noticeable.

As per our review, this is a more story driven shooter than DOOM - offering a lengthy and memorable campaign.

With no multiplayer content, or online co-op, Wolfenstein II is strictly single-player and story-driven. A decision that ultimately results in one of the most compelling campaigns we’ve ever seen in a modern shooter. It’s hard to shake the feeling that you’re playing an instant classic whenever you fire-up Wolfenstein II. Which is in part thanks to the old-school presentation, linear story-driven approach, and emphasis placed on encounters against large groups of varied enemies. Well, varied in tactics, weaponry, and armour - they’re still Nazi scum. But another part of it can be found in the pacing, and the campaign which is both large in scope and never boring.

Also, the alternate 1961 timeline and reality never gets too campy or ridiculous. Even though this is a time when Nazis research into new and ancient technologies has resulted in vehicles the size of stadiums that can move about freely in the air and flying saucers that may or may not be able to leave the Earth’s atmosphere. The tonal balance that Wolfenstein hits between the seemingly silly and over-the-top, with the serious, tragic, and emotional is a masterclass in storytelling. And one that gradually ramps up to reach a truly satisfying ending – and one that has true emotional and cathartic weight behind it.

Strangely the Switch version feels a lot better balanced and easier to aim and shoot compared to DOOM, but that could very well be a case of becoming one with the Switch after several months of heavy Joy Con usage. Either way, one of the biggest gripes with the original Wolfenstein II - that being the overall difficulty and how it changed wildly from moment to moment - wasn’t so much of a problem this second-time round. In fact, after the somewhat frustrating and all over the place learning curve with the PC version the Switch release of Wolfenstein II was a pleasure to play.

It’s a testament to the game’s quality that a second play-through less than a year after the original release still felt fun, fresh, and exciting. Even without the DLC packs, it’s great that we get to play Wolfenstein II on the Switch - and just like with DOOM this is a wonderful addition to the Switch family.
Follow Us
Latest Reviews
More...
News Feed
Advertisement
Latest Threads
Log In
Create Account | Lost your password?