I love the Wild West as a romanaticised genre. I love its portrayal over time and how it went from Wayne-starred near-musicals; colourful and shiny and soft-lensed, to the grime-layered, unshaven exploits of ronin-turned-gun-slinger types rousting about with nary a name. From fully pressed evening wear buttoned to the last, to dusted, moth-feasted jackets, yeller teeth, and a look of whiskey-soaked skin you can *almost* taste through the screen; textured and tangible, glistening as beads of sweat.

Its proprietised peaks and troughs, where soft men are replaced by hard men*, where pearl white sets, perfectly curated and cleaned and presented, are replaced by bullet-soaked saloons, splintered and cobbled, sat in the middle of murderous dustbowls, make for as good a storytelling device as any train robbery gone awry, or maddened tale of revenge.

The Wild West, imagined, is a thing of gritty majesty; a place of limitless potential for tales tall, of every kind.

We’ve spoken at length already about the Weird Western; all of the above on eldritch steroids. It’s where the Wild West becomes more -- a sentiment amplified by the idea that all of a sudden “wild” is no longer an apt adjective to describe the unrestrained nature of a thing. Where a rustler no longer threatens just your cattle, but also your life because they might also be a werewolf.

That sort of thing. 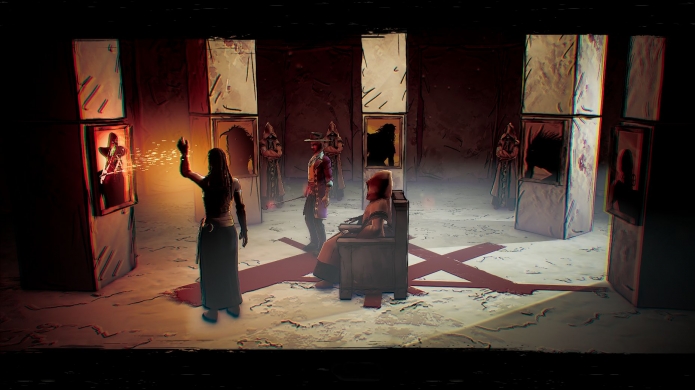 Weird West, from WolfEye Studios -- the developer’s debut game -- is a Weird Western that embodies the very concept of the subgenre. It is mystic and dark, and brooding and horrific. It plays with concepts of the unseen and the grotesque, the macabre and the dazzling. Shapeshifters and ghosts, wraiths and zombies and sirens and… pigmen. All and more are part of the functioning and accepted makeup of the world of the “West” -- a place of desperation and despair, but also one of hope and faith. It’s a place where you can help a fellow in need, or bury him deep beneath snakes -- the choice is yours.

"Where solutions aren’t canned or locked to a single path, and how you tend to achieve your required outcome is driven by a dynamism and reactive game-world...”


And it’s at “choice” we’ll dissect this game proper, because Weird West is something of a potpourri of ideas and mechanics, all typically tied to the “Immersive Sim” genre of games -- where systems and open-ended gameplay afford players a greater sense of agency over their goals and objectives. Where solutions aren’t canned or locked to a single path, and how you tend to achieve your required outcome is driven by a dynamism and reactive game-world wrought with unintended consequences.

At its heart, Weird West is still very much a Western. And it’s a very good Western. In this frame of mind, you can cast your suspension of disbelief first at the believable. The game does an incredible job of having a functioning world with believable systems. People go to sleep at night, and they work during the day. This means there’s less activity in a civilised place when the sun has set. If it rains, things get wet, and cavities fill with water. If there’s oil on the ground and it’s struck by flame… well, you can guess the rest. 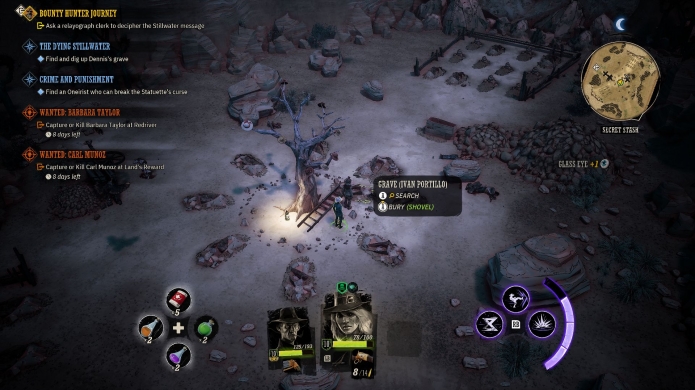 The game is full of common sense design principles centred around form and function. And when you start recognising that, you’ll start to play with it in fun and unique ways. WolfEye encourages you in the very early throes of the game to save before big encounters, just so you can experiment with its systems and witness the game’s dynamic nature and figure out how best to use that to your advantage. It has a little bit of Desperados about it in this way, perhaps more so because of the setting, but it’s where my mind has gone a handful of times. And as a game similar to that, it’s never against you. At least, not in the unfair department. Failure in any given instance will fall squarely on you, because it’s not like the game hasn’t given you all you need; all the tools to get the job done. And you’ll die a lot. The enemies are smart, and the systems are harsh when it all aligns against you, but there’s backup here, and it comes in the form of traditional gaming stuff.

"It’s stuff we know and have done before, and it’s baked into the game in such a way that as soon as you know how it works, it becomes second nature...”


See, on top of being an immersive sim, that is also best described as a survival-lite Western, that is also an arcane-fueled RPG, Weird West is a game about self-management. You get weapons which can be upgraded, but you upgrade them through collection of precious metals. These can be looted from enemies and caches, or mined out in the world. Smelt them and visit the blacksmith and voila, a common becomes a green, and then a green becomes a blue and so on. It’s stuff we know and have done before, and it’s baked into the game in such a way that as soon as you know how it works, it becomes second nature. The same can be said of vests (your clothing and armour), where once you’ve worked out how hunting and skinning works, and therefore upgrading, you’ll kit yourself out in the best possible protection, as well as your companions. 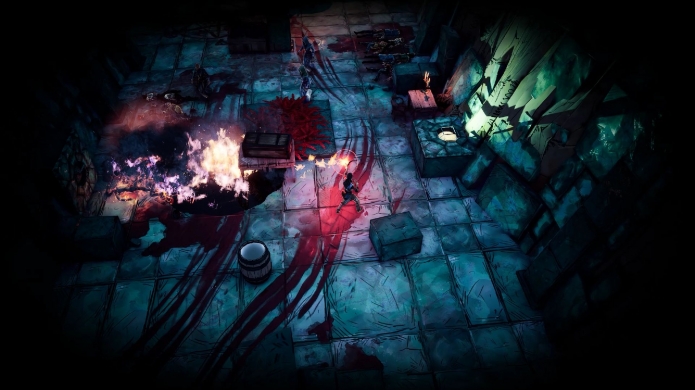 Nothing in Weird West is overcomplicated. You get amulets to activate a passive ability, and these can just be found out in the world. You store food to be cooked, which can be looted or hunted, particularly in Camps. You break down non-essential weapons to turn into ammunition to free up space in your inventory. You collect junk to sell at the General Store to keep your very important economy flowing (more on this in a minute). You store health items and potions to handle encounters and so on again. The whole game is just designed for you to function in because understanding how it functions is really straightforward.

"If you steal a horse, whenever you reach a destination it’ll bail, lickity-Winx, leaving you horseless...”


In the early game, for example, if you steal a horse, whenever you reach a destination it’ll bail, lickity-Winx, leaving you horseless. The only solution is to buy a horse from a town’s stables. Owning your own horse also means you can store inventory in its Saddlebags, so it’s a good idea. Also, the Saddlebags of owned horses are linked, character to character (more in this in a minute, also). But this concept bleeds into the game’s need to keep that money flowing, because you’re always going to need something, and something always costs money.

In this way, the game does a great job of keeping you preoccupied from your main goals as side-quests and favours earn cash. So too does basic exploration and discovery, and I found myself constantly going off script as a result (in the best possible way). This isn’t an open-world outing, per se. There’s [an overworld] World Map, and dotted across it are disparate destinations and biomes, and like old-school RPGs travel across the map generates any number of random encounters, but WolfEye has been clever in how all of this is delivered and in how it plays out. Some parts of the game are procedural, and there’s a sense of randomness to activities and certain locations, but it never feels disconnecting. 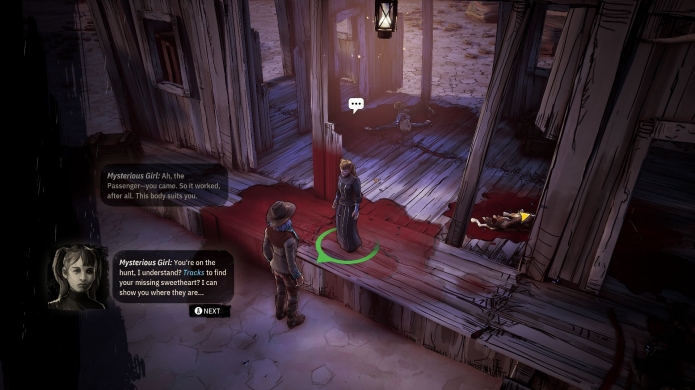 I should add right now, too, that much of everything described here is early, early stuff. There are five vignettes to play through, and all are connected through the world and overarching concepts and characters and stories, but I’ve been careful to avoid spoilers which is why I haven’t dived deep on Inun or Yeb, on Witches or corrupt Mayors. On the Stillwaters and warring distillers. On ghosts and the lost past… this game-world, functioning and guided by common sense design as it is, is as rich a world as I’ve ever played, and its lore and potential is top-tier. And it’s infinitely playable because of the promise of a dynamic experience every time you fire it up, and every time you make a choice.

"It’s happened enough that it really is an issue, rather than me needing to just git gud, as the kids say...”


Still, I’d be remiss not to highlight some issues. There are problems in the game’s camera setup, and in particular when using a controller and switching between camera control and aiming your weapon. I’ve found myself in precariously-presented viewpoints because of this, and it’s not always an avoidable thing, or something you can learn to deal with. Moreover, interiors and other tight spaces can throw in visual obstructions -- parts of the environment that don’t go opaque and just block your vision. While the limited animation trees can also mean sometimes trying to string together fast actions, such as a quick escape that requires a jump, after you were just in crouch stealth has the game not wanting to recognise your inputs. And it’s happened enough that it really is an issue, rather than me needing to just git gud, as the kids say (or might be thinking).

I’d also be lying if I said I didn’t want to experience the game in a streaming open-world setup in first-person, or even a more traditional third-person way. Don’t get me wrong, the way in which WolfEye used its final setup is amazing, and clearly budget factored into this, especially in consideration of how much other content there is in the game, but I’m greedy and it just made me want it more. If only to feel more attached to the game-world, and maybe more so because we’re so spoiled in that space these days.

Beyond those ‘issues’ though, there’s not much to fault Weird West as a game on. And without the 'Weird', and even just with a single character's vignette, the game is basically a 9/10 all day (in my book). The thought that has gone into all of the base mechanics and how it handles common sense real-world ideas while also being a game with RPG components and action elements, and discoveries and side-quests and everything else that elevates it from its humble and relatable foundations, makes it one of the best games of the past few years, by far. And I’ve barely shared any of its core stuff. There’s just so much to discover and learn for yourself. I didn't want to spoil the experience, because for me it was incredible. Gritty and majestic, all at once.

*In the context of those stories told in various Wild West media.

Setup: This review was written from played copies of both the PC version of the game, as well as Xbox utilising a Samsung 75" 8K QN900 Neo panel.