If you were being cynical you could say that Uncharted 3 is a misnomer. In fact a lot is charted; you navigate through levels by climbing up walls, jumping from ledges and swinging from chandeliers. You also solve puzzles and fight bad guys as you and a familiar cast of characters follow the clues from one exotic location to another. In other words it's just like Uncharted 2. It's just as well then that along with that familiar formula returns the amazing visuals, stunning backdrops, perfectly executed story and perhaps the best voice-acting in a video game. It would be delusional to say that the gameplay feels refined and that Naughty Dog have tweaked and smoothed out areas of weakness from Uncharted 2. The truth is it feels much the same as its predecessor, but you have to ask yourself "is that a problem?" The answer, emphatically, is no.

Rarely will you feel so loathe to rush through a game as when you play Uncharted 3. Whether it's London, a secluded french chateau, or an ancient medieval castle the visuals are both outstanding technically and flat out breathtaking. But you can do a lot more than stand on rooftops and admire the intricately crafted scenery and the impeccable recreation of your immediate surrounds. Naughty Dog have also used their visual prowess to bring many of the puzzles to life. From the small details of symbols carved into stone to sweeping statements of grandeur that adds to the sense that, as Nathan Drake, you really are chasing something spectacular. 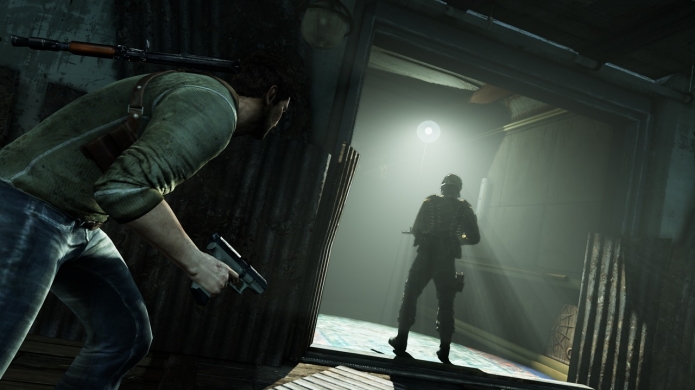 Such impressive visual execution combines perfectly with fantastic voice acting and character animation. You may have seen the TV ad where the gamer's girlfriend keeps thinking he's watching a movie, but it really is that polished. While in most games characters stand like statues when silent or perform repetitive movements, in Uncharted 3 characters move with distinct realism and intent that matches either their role or their dialogue. The soundtrack adds another layer to the games appeal, perfectly matched to the moment and never overstated, it is another feather in the cap of the games technical achievement.

With the visual impact of the game so forceful it's a shame that there are one or two things to nitpick in the gameplay. Most of the gameplay involves climbing, running and jumping and in that respect it's solid, but if you're a fan of the uncharted series there has to come a time when you get a bit tired of the the scripted near-falls and slips and begin to see them as intrusive when they come a little too often. Having said that, several chapters come and go before Drake's Deception breaks out of its mold. A number of chapters follow the formula of explore, solve, get screwed by the bad guys and escape, a formula that is a bit contrived and irksome. It's not until this mold is broken that you get to really experience what a great game Drake's Deception is with its great balance of gameplay styles and puzzles that are creatively designed to mix it up enough to stop it from being repetitive, boring and frustrating.

Naughty Dog did miss out on improving in the weakest area of the Uncharted series, the shooting mechanics. Of course it's not meant to play like Gears of War but it still feels artificial and a little hollow. What is a minor shortcoming however, is compounded by unrealistic reactions of the oft-impervious NPCs. Too many times headshots do nothing while a clean shot to the back at close range is more likely to result in the intended victim turning around as if you hit him with a pellet gun. Armoured enemies are particularly egregious as multiple headshots might knock their beanie off, but they keep on coming. For Uncharted it's best to accept this arcade-style escapade early and apply bullets quite liberally when required ,as ammo and various weapons are plentiful.

There are other times of course when gunplay is not required and you resort to good ol' fisticuffs. It's a rather simple mechanics as you can attack, counter and throw your opponent and while it's not perfect it's very solid. The counter system can degenerate into frantic button pressing but the combat system cleverly integrates the environment as countering near an empty bottle will have it smashed over their head or Drake might face-plant them into a nearby wall. But given the volume of enemies you fight hand to hand is usually not an option, unless it is scripted into the game. 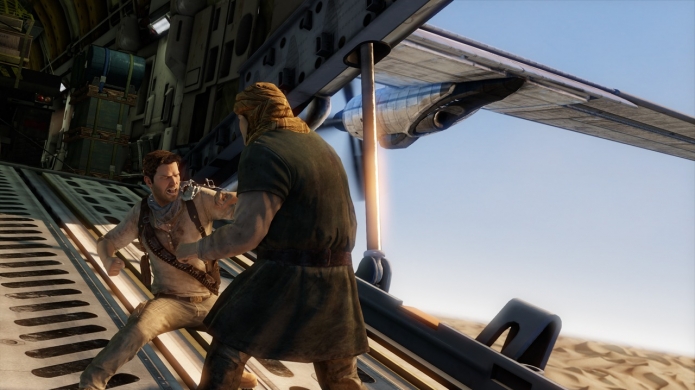 It's not fair to say that Uncharted 3 is a mixed bag of good and bad, it's a bag of amazingly good sprinkled with some aspects that could be improved. But playing through Drake's Deception there are times when you wonder if Naughty Dog are taking the mickey out of you. Partly it's the disbelief that the bad guys manage to follow you to hidden location after hidden location regardless of how you traversed the secret passages. Partly it's that they always turn up in perfectly tailored suits and polished shoes. Of course, scripted falls also make an appearance in the disbelief category as falling debris consistently fails to alert, well anyone, despite the fact that you're trying to be stealthy. But the icing on the cake has to be your dramatic escape from a burning building as you're confronted by wave after wave of henchman lying in wait. Waiting in a burning building; that's collapsing; and on fire. Really? It's a strange outcome for a game so carefully crafted that such inconsistencies appear at all.

Drake's Deception is driven -- like previous Uncharted games -- by the compelling and flawlessly executed story which is matched perfectly by the stunning visuals. Without doubt it's at the pinnacle of storytelling in video games. The puzzle solving is also a boon, intricate in detail with enough leeway to let you do all the thinking. It's a little disappointing then, that the shooting mechanics have the same shortcomings as Uncharted 2 and that it takes too long to get going. It's as though an opportunity has been missed to combine a game that entertains so well with one that plays flawlessly. Yet be that as it may the end result for Uncharted 3 is plenty good enough.
Latest Comments
Link