Fuelled by alleged parkour antics comes Tron: Evolution, bridging the gap between the 1982 classic film, and Tron Legacy soon to hit local cinemas. Movie tie-ins are usually the kiss of death for any developer, and while this title has its moments, it’s certainly not going to break the (light) cycle. The wafer thin plot is as such, you’re an anonymous monitoring program imaginatively called “Anon”, created by Flynn (Jeff Bridges) to combat an infected ISO (Isomorphic Algorithm – your populace in this construct) named Abraxas, threatening to infect everyone and everything. That’s pretty much about it.

For the most part, it’s a mesh of simple platforming made hard, brief distractions with light cycles and tanks, and combat against aggressive programs that want to reduce you down to source code. You have four different disks at your disposal, each with unique upgradable abilities. There’s a Heavy Disk to bring the pain, a Bomb Disk for collateral damage, Stasis Disk to slow enemies down a notch and a Corruption Disk that inflicts damage over time. Each enemy is susceptible to at least one, so it becomes a constant juggling act to find the right tool for the task at hand. 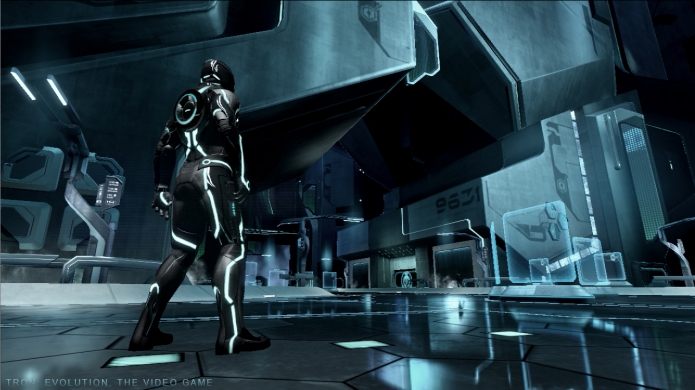 The rest of your time will be spent platforming and consequently cursing. Jumping between platforms and walls isn’t at all as smooth as it should be; ignoring tried and tested conventions. You’ll inevitably end up falling to your doom (a lot of the time through no fault of your own), with each derezzing death slinging you back to the last checkpoint. It all just feels a little off. After working my way through the same section 10 or so times, it began to wear a little thin and I wanted to grab my disc and derezz myself.

Blazing a trail on the light cycle was a welcome relief, so too the basic, yet satisfying tank commandeering jaunts. The pacing hits a major roadblock around the halfway point, with it degenerating to the following basic code; 10 Attempt platforming, 20 Clear a room, 30 Platforming time again, 40 Clear another room, 50 Goto 10, End of Line. It does pick up, but these stumbling blocks will frustrate and annoy. If I didn’t have to finish it for this review I seriously doubt I would have.

As you negotiate the final chapters, the difficulty spikes. The problem is, the tactics employed are ridiculously cheap. Whether it’s the aforementioned broken jumping and wall running, boss battles riddled with platforms of doom (the face off against Abraxas in particular is infuriating), or the enormous jump after running over a energy replenisher, I constantly felt like I was at odds with the game’s mechanics, rather than feeling the flow.

The camera is no help at all, on par with Beenox’s atrocious effort for wall crawling in Spider-Man: Web of Shadows, having a minor epileptic fit as it leaves you completely in the lurch disorientated. Tanks, in particular, take advantage constantly spamming shells on your position, which travel through cover giving you no respite or recourse. There were moments where my patience and the plastic housing of my X360 controller were equally tested, as I meditated like a Buddhist monk to enhance my calm and proceed onward.

Tron: Evolution looks decent enough on paper. Jeff Bridges and Olivia Wilde reprise their roles, the score is beautifully lifted from the 1982 cult classic film and there’s something extremely captivating about aspects of the electronic world you traverse. It’s disappointing that the basic mechanics feel off, the camera has a mind of its own and its difficulty comes from broken ploys and gambits, rather than a true challenge of one’s skill.