Megatron certainly has anger issues, which is a fact that Transformers fans have known for many years. He (assuming robots can be identified as either male or female) seems to get upset no matter what the situation; positive or negative. He berates his closest Decepticon allies, even right after they've managed to save his life, which makes you wonder why the hell anyone would even want to be a Decepticon. In fact, probably the only guy (again, assigning gender to a robot) who seems to know how to deal with Megatron is Soundwave, and that's mainly due to the fact that he speaks in that monotone, emotionless robot voice, and only seems to spurt factual information along the lines of "Megatron, the door to the Cybertron Core is now open". So it's pretty hard to berate that. No wait, it seems Megatron found a way, with the sarcastic retort, "I can see that."

Transformers: War For Cybertron (WFC) is definitely one for the fans, and as the opening paragraph demonstrates, is a game that captures the relationship dynamic between the individual Decepticons and Autobots as they first appeared, all those years ago, as a Saturday morning cartoon. This comes as a huge relief, because after the woeful second Michael Bay-directed film, the one with prehistoric robots, black-sidekick robots, and a scene where Shia LaBeouf dies and goes to robot heaven, the franchise was in a spot of trouble. Thankfully developer High Moon Studios knew how to use the franchise well, by going back to the beginning, and setting the game right before the cartoon. And perhaps even more surprising is the fact that the gameplay follows suit, with a mish-mash of established concepts and play-styles that merge together (much like the Transformers themselves) into a smooth well oiled machine - or as the game would have you believe, a well 'Energon-ed' machine.

As a franchise Transformers screams nostalgia, and the gameplay on offer here pretty much does the same. To put it simply, the gameplay takes its cues (see: 'borrows a lot of stuff') from a number of well established shooters, and for the lazily inclined reviewer a few quick initial impressions could describe it as follows. As a third-person shooter the running and gunning between action set pieces and utilising cover is somewhat reminiscent of Epic's Gears of War series. With the 'double jump' being part of the controls and overall gameplay being pretty fast paced, it's also a little bit reminiscent of Quake, especially in deathmatch. With the ability to transform into vehicles and take part in mechanised vehicular combat it's also reminiscent of Halo and to a lesser extent Descent (when you take to the skies). Being able to choose between different Transformers, each with a different class and with that different abilities and perks is reminiscent of the multiplayer found in games like Call of Duty. And finally, the three-tier massive boss battles in the campaign work just like every classic Nintendo boss encounter since the 90s. Sure, it may not be original, but it works remarkably well, and above all is quite a bit of fun to play.

But exactly how much of this can be attributed to the franchise itself is somewhat debatable. If you took the classic Transformers setting, characters, and story out of the mix your impressions may be different, but as an example of a franchise being used well, especially one as inherently cool (movies aside) as Transformers, this is definitely impressive, with the main game being split up into two campaigns of equal length for each of the factions, that being your Decepticons and your Autobots.

The story initially follows Megatron and his quest to take over Cybertron, whilst culminating with Optimus Prime taking charge of the Autobots as they try and stop them. It's not exactly Willy Shakes level stuff, but the best part about the story is the characterisation of each of the Robots in Disguise and the constant interactions they have with each other and their reactions to each situation. Think of it like a much better version of the idle chatter between Marcus and the other meat heads from Gears of War, which always tried way too hard to be more than the sum of its parts. Here the sheer childish nature of the setting works in the story's favour, and makes the dramatic moments quite engaging. 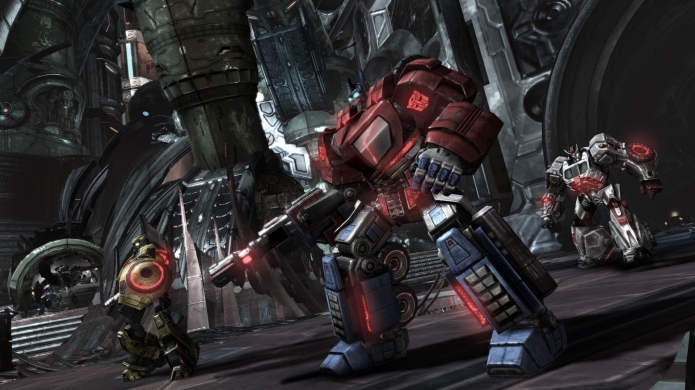 Being able to choose between different Transformers to tackle each campaign chapter certainly adds a level of replay-ability - especially when you take into account that different characters have different abilities. For example Megatron can drain enemies for Energon to replace his own loss of Energon (ie health), whereas Brawl can perform a Whirlwind melee attack to make short work of any Autobot grunts. On the Autobot side of the fence, Optimus can perform a Warcry that works very much like an attack buff and Bumblebee can perform a shockwave attack that just so happens to cause havoc to Decepticon circuitry. Although it could be considered quite short, the campaign is probably the right length for a game of this nature, and doesn't feel at all artificially extended. This is a straight up action game and doesn't require an RPG-level epic campaign. It's a lot of fun to play from start to end, from the very first moment you transform and hear the classic Transformers sound effect to fighting and racing your way through the wreckages of Cybertron.

The best part of course, is the ability to play the campaign in co-op with three players each taking the role of a well known Transformer that would otherwise be AI-controlled in single-player. As the game opts for being fun and entertaining above nuanced and original, this works wonders for the co-op. This is because the very foundations of classic co-op gaming are built around those very things. This sentiment also doubles for the competitive multiplayer modes, which are also heavily influenced by existing hallmark shooters. Take the standard team deathmatch mode, which pits Autobots against Decepticons in various well-designed maps. With the fast-paced gameplay and fluid movement between robot and vehicle, each round takes only a few minutes and is chock full of large and small scale encounters, that are both hectic and intense.

Although the perk and experience system, lifted directly from Call of Duty, helps instill a false sense of forward momentum and progression, at its core the multiplayer is simply just a lot of fun, and quite simplistic. When looking at a competitive multiplayer shooter some gamers look for longevity and may want to play a particular title for months as opposed to weeks. This is not one of those games; it's a light fluffy affair (which is a strange way to describe a game featuring large hulking robots) and should keep you entertained for at least a few weeks. Similarly the game's 'horde' mode, this time lifted from Gears of War, is equally entertaining and a great way to extend the co-op past the campaigns. 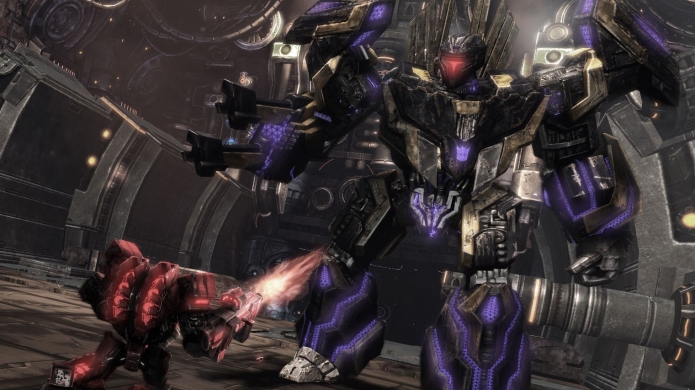 Perhaps the only real problem with the game is a general lack of variety in the environments and consequently the visuals. Taking a quick look at the screenshots and it's pretty clear that the use of the Unreal engine makes a lot of areas look quite samey, which is a shame. Taking place almost entirely on Cybertron, the locations are virtually mechanical versions of well established and generic corridor shooter environments, with more shades of grey than you'd think was possible. It'd be great to see a sequel taking place on different planets, even Earth, which would pave the way for a solid visual counterpart to the original cartoon series.

In the end it's great to be excited about the Transformers franchise again - War For Cybertron works wonders in washing out the bad taste left by the second live-action film. This is fan-service at its best, and well worth a look.