A few decades from now, when MIchael Bay is standing in front of the pearly gates, he might be asked what he did that makes him worth saving. Armageddon? Nope, physicists proved that it wouldn’t work. Bad Boys? Ummm... No. Helped re-popularise awesome 80s action figures? Enter s’il vous plait... just don’t talk to anyone. That Transformers has become such a blockbuster property is in some ways not hugely unexpected; the concepts are epic in their scope and the character profiles are timeless. What is unexpected is that the handling of the re-energised (was there a re-energoned pun in the last review?) Transformers has eschewed the movies ham fisted-ness, as well as links to 80s cross-dressing metal bands and the overall desire to reinvent.

High Moon Studios can be thanked for their part in all of this as Fall of Cybertron (FoC) not only echoes the successful gameplay of War for Cybertron (WFC) but it expands it and drops it right into some truly arse-kicking art-direction. In fact it’s the type that makes you want to break out the latest Expose mag and stare longingly at intricate sci-fi backdrops. Some of the textures may lack that fine polish and detail, with moving parts the main culprit, but the folks at High Moon could hardly be accused of velleity.

With a name like Fall of Cybertron it’s no secret what the overall story arc is - a direct sequel to WFC as the Transformers try desperately to escape the doomed Cybertron while battling each other. As in WFC you take control of different Transformers both Autobot and Decepticon, each with different abilities and it’s this variation that opens the gameplay up to something more interesting than a simple third-person shooter. While the gameplay mechanics are solid it would become a tiresome formula if it wasn’t varied with stealth elements, the ability to use a grapple hook and of course to transform into an attack helicopter, fighter jet etc.

The perk and upgrade system is back, a nice inclusion to help carry you through a game in which the main combat element is somewhat singular. One drawback of course is it is just too simple, no doubt a function of it applying across multiple playable characters. Essentially it’s a save-and-purchase perk system, you save up and buy it with no need to think of the pros and cons of different perks. Shield boost, health boost, faster movement and the like are all core elements of play and the perks really function as simple upgrades to these inherent abilities.

The other side of the system is upgraing weapons, standard fare for the most part but full upgrades unlock a bonus such as 500% damage on last clip shot and 75% boost to melee damage. There’s lots of fun in these upgrades but careful choice is required as some weapons kind of suck and you will likely find yourself attached to a weapon early on. You can also buy various explosives and shields, but on the easier difficulties tactics are hardly a priority so they’re mostly ignored.

For the most part there are not a lot of tactics in Transformers, it’s simply a shoot it till it blows up style of play. When tactics do surface it’s the old weak-in-the-back idea, requiring you to dodge a charging enemy before attacking it from behind. Even the final showdown is bereft of any serious tactical approaches. With different light and heavy weapons available it would be interesting to see different stages requiring different load-outs, as you can freely change your weapon at the upgrade stations. 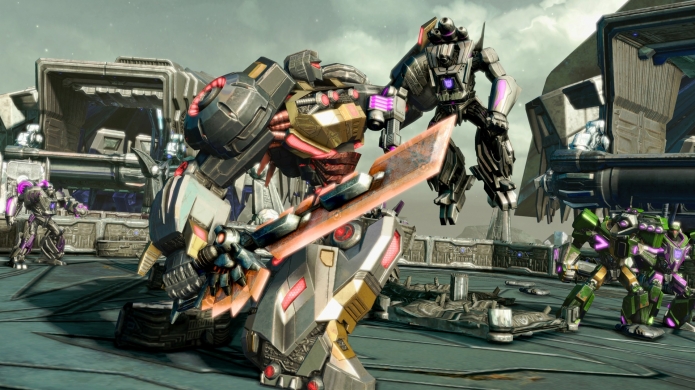 To continue on the theme of shortcomings in FoC, the interactive elements are too simplistic. When you’re not running around shooting you’re pressing ‘X’ (on 360 that is) regardless of the situation. Need to pry open a door? Press ‘X’. Need to plant a bomb? Press ‘X’. Need to diffuse an intricate explosive device with the aid of another transformer? Press ‘X’. Even opening massive doorways requires the same button with the inclusion of the left thumbstick, which is perhaps the most galling. In some situations the context-sensitive issue allows for seamless gameplay, such as stealth executions, but when it comes to huge doorways a security code or some other gameplay device would be a nice change.

Of course focusing on such small gripes with FoC ignores what the game does really well; weave smaller storylines into the larger arc while providing enough scattered information to keep you wondering not just about the immediate arc, but the Transformer universe as a whole. Alternating between Autobots and Decepticons isn’t simply a vehicle to placate fans but works legitimately to expand the story from different angles and flesh out characters and areas of Transformer lore. With this being well executed FoC avoids the one-dimensional pitfalls of a game like Resistance and crafts something more inclusive for the players.

Transformers visual scope, as mentioned before, is a much larger canvas that balances nicely the indoor/outdoor dynamic. There is admittedly still a problem with the repetitive nature of walls but the issue is handled better by having more open environments that draws your focus to the horizon, rather than the walls in your immediate surroundings. The game is also less grey, while hardly a zealous splash of the colour spectrum a lighter approach makes it seem less drab. Thrown in for good measure are some nice visual effects scenes, such as a surprise trip to a map room - a very impressive planetarium-like affair.

Returning for good measure is the Escalation mode, essentially like horde mode in Gears or if you prefer, standing around in the Facility level of N64 Goldeneye shooting wave after wave of Russian soldiers while refusing to finish the level. But luckily Escalation is much more involved, with up to four players and a real advantage in working together as a team. Yet if you wish there is the standard fare of multiplayer modes if you have a tendency to go rogue and forget about that whole teamwork thing. In that vein there is no co-op in this release and while that might seem like a let-down, the replay factor is still apparent in other online modes and no game has matched Halo co-op for fun yet anyway so it’s far from a deal-breaker. The long-awaited build- your-own-Transformer mode arrives and works as a nice carrot for you to get online as points earnt can be spent to explore what seems a very deep creation tool.

FoC is a step forward for the Transformers property albeit a small one. The improvements in variety both visually and in gameplay styles is a welcome rounding of rough edges but not a significant evolution in itself. Then there are the non-events like perks and context sensitive buttons that prove to be missed opportunities for changes and improvement. What remains impressive is that the game stays true to the roots of the series, good enough to stand as official canon. The core gameplay remains solid with flashes of excellence and the game not only creates interest in the whole escape from Cybertron story, but creates excitement and a foundation for the inevitable sequel.