It’s a funny thing nostalgia; a hazy collection of memories that you associate with trends and events from days gone by, but when confronted years later can lead to two very different outcomes. It can either be the timeless Blazing Saddles - “they said you were hung.” “And they was right.” (for one example) - or it can be Dana Scully in the X-Files, leaving you wondering why you ever had a crush on her all those years ago. When Tony Hawk’s was first released it wasn’t just a skating game it was a revelation. It pitted friends against each other and against the clock in a battle for high score bragging rights, the tight controls and encyclopedia of tricks would keep you awake at night planning new lines, new combinations. The gap list and challenges themselves would consume you in your efforts to 100% every level with every skater.

With the level of obsession that Tony Hawk’s 1 and 2 inspired it’s a daring task to bring it back, particularly given that Tony Hawk’s has lost its crown to the Skate series and the format itself has moved on to massive urban sprawls. So is Tony Hawk’s HD Blazing Saddles or Dana Scully? Actually, it’s a little of both, balancing the rail so to speak between a fantastic and tireless trick system and a sub-par conversion. 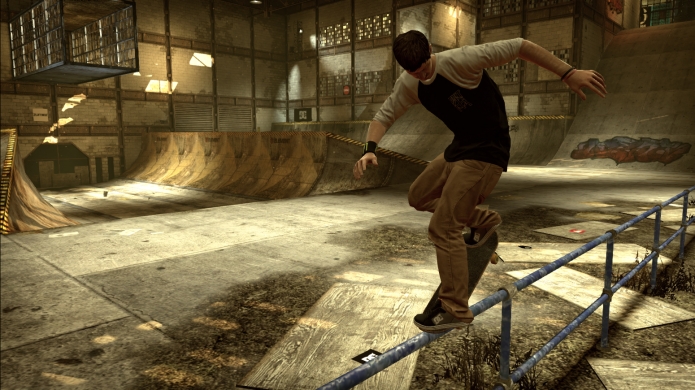 For starters, for a game that takes the ‘best’ of THPS and THPS2, there seems to be quite a bit missing. On the skater front yes the greatest of all time Rodney Mullen is back, but why is Lyn-Z Adams replacing Elissa Steamer and where is Kareem Campbell, Rune Glifberg and Bob Burnquist, yes the Bob Burnquist, all of whom were in both THPS and THPS2? How can it be a revisit when skaters are replaced? Yes there might be licensing issues, but seriously, it’s like tabletop electrical football without the NFL license - a bunch of imitators vibrating randomly around the board.

Compounding this snafu (yes that’s right, snafu) is the inclusion of levels. Sure Warehouse, Venice Beach, School and Marseille are definite inclusions but Mall has always been a sucky level, particularly when you already have Downhill Jam from the same game. Why not Burnside or even Roswell instead? But maybe we’ll see them as DLC.

Yes these opinions are a bit like an old man trying to return soup to a deli, but THPS HD is not just about what was left out but also about the quality of what was left in. Rather than a graphics overhaul it’s more like a gloss, the levels, still functional in their design lack the detailed textures and effects that would bring them back to relevance. The game utilises the Unreal engine but also lacks polish. The physics are at times unpredictable and launching for transfers at different angles can confusingly make no difference at times while that mechanics of eating it can range from a 10 meter upward projection to a sudden stop. When you add to this the issue of some objectives, such as grinding certain objects, not always registering it’s easy to wonder if this was a port from five years ago rather than now.

The saving grace then is a big one: the amazing, still fluid, tremendously enjoyable trick system. The conversion might be Dana Scully but the foundation trick system and level design whips out an excellent welcome speech for those that missed THPS 1 and 2 or for those wishing to relive past glories. The classic A-button ollie style of play is still exactly that, classic, with even the small levels such as Hanger and Warehouse surviving well despite contemporary move to more open spaces. There might be issues but after re-adjusting to the two-minute objective system Tony Hawk’s proves to be almost as obsessive as all those years ago.