Last month one of the big questions surrounding the release of BioWare’s Anthem, a game that shares some similarities to The Division, surrounded the endgame. What was there to do once the story was finished. What will players find, and how much of it would be fun and varied and rewarding. A valid question, and one that has become more common of late as large-scale always online shared-world releases from big studios and publishers vie for your attention. And continued attention as the weeks and months roll on.

That said, talking about endgame as the be-all is a strange way to look at any experience. Or serve as the basis for any overall judgement. Where The Division 2 excels isn’t so much due to the improved day one endgame compared to just about any ‘looter shooter’ we’ve seen before, but in how it applies the expectation of variety and stuff to do and lessons learned from the first outing to the simple act of walking the streets of Washington D.C. 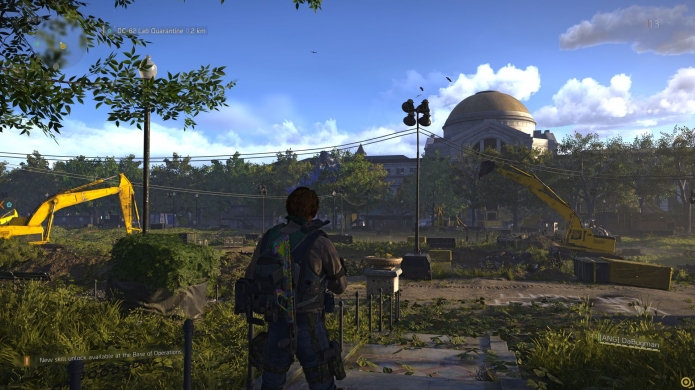 Variety exists from the get-go and doesn’t let up in the slightest. To say there’s a lot to do in The Division 2 would be an understatement, it’d be overwhelming if it wasn’t all so engaging and rewarding. Whether it’s the Dark Zone’s survival aspects, traditional competitive team-based arena combat, new missions in wonderfully detailed locations, more challenging enemies and factions, finding hidden loot, side missions, capturing control points and supply lines, finding Slim Shady caches (i.e. SHD Tech), or daily tasks in the form of high-profile bounties and targets to eliminate. The Division 2 all but removes the need for the endgame question entirely.

A staggering achievement that when viewed as a straight-up sequel to a loot-filled original - reminds us of the differences between Diablo II and the original Diablo. A more focused and assured vision, a clear understanding of what worked from the original and more importantly – the action-RPG genre. All wrapped up in a new and more grandiose setting – chock full of looty goodness. 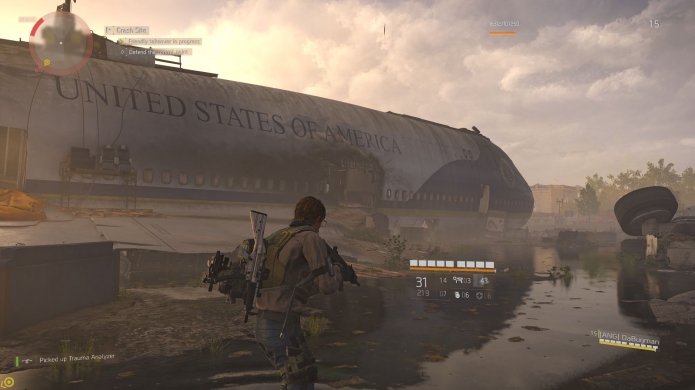 Winding the clock back to 2016 and the release of Ubisoft’s The Division three years ago, it was the evocative, stark, and truly desolate setting of a post-viral wintery Manhattan that proved to be its biggest asset. Switching the location and season to Washington D.C. in the summer time and - on paper at least - it sounds like a step down. Gone are the snow-capped peaks of large skyscrapers serving as mountains, devoid of life and activity. In their place buildings designed to look like works of art surrounded by precisely detailed monuments, all defaced with graffiti.

"To say there’s a lot to do in The Division 2 would be an understatement, it’d be overwhelming if it wasn’t all so engaging and rewarding."


Visually, The Division 2 offers up several notable improvements over the original – even if the general look and feel and presentation is in step with what has come before. After all, it’s the same Snowdrop engine underneath the hood – improved and fine-tuned in the subsequent years. And with that in mind, just about everything in The Division 2’s world gets a bump in the detail department. Where what we once thought was an impressive amount of digital garbage and clutter, is dialed all the way up here.

Strewn bits of debris, puddles of green water (aka Washington Juice), abandoned vehicles, overgrown buildings and sidewalks, unkempt parks, monuments defaced with graffiti. Colonial, Greek, and Roman architecture serving as remnants of a past-its-prime empire, chipped away due to wanton destruction. Weather that can go from a vibrant sunny day one minute to a dark and stormy fog-filled night the next.

The Division 2’s capital wasteland has an immediate and different feel to the first game’s Manhattan setting – and is all the better because of it. For one the sense of desperation and stark reality of a world all but destroyed is mostly gone. In its place the feeling of a vibrant and chaotic urban jungle. One where survival is entirely possible and conflict inevitable. Enemy factions may feel like versions of the same enemies that roamed the streets of New York City, but the improved AI and tactics deployed add to the overall sense of the familiar - but new and improved. 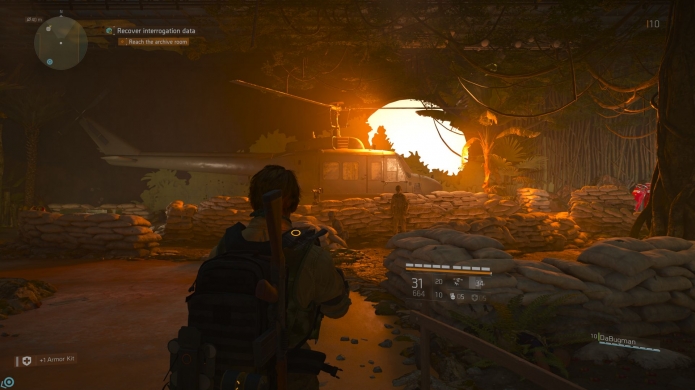 It’s a shame then that the character models look, well, like digital ghouls. In terms of open-world Ubisoft environments The Division 2’s Washington D.C. offers a beautiful and highly detailed world that impresses on all counts. Character faces on the other hand, stand out in their slightly melted and deformed plasticine look. Which in turn only adds to the overall feeling that the story and people you get to meet and speak too here, lack any real depth or nuance. A problem which plagued the original, alongside its many flirtations with fascism and the idea of militaristic superiority as the be all end all. Two things that resurface in the sequel that thankfully, gets mostly lost in the sea of clutter and detail and piles of rubbish found throughout Washington D.C.

And where the original provided a solid third-person cover-based shooter as the sole reason to keep delving deeper into its immersive city, The Division 2 cleverly employs its new location to contextualise the variety. Even if you’ll still be hiding behind cover, periodically sitting up to shoot at bad people. This time, the set dressing and locations offer startling, new, and wonderful backdrops to all the chaos. Each new main mission will take you to a new corner of the city, showcasing a real-world museum or historical landmark. Or something separate to the urban jungle that makes up D.C. proper. 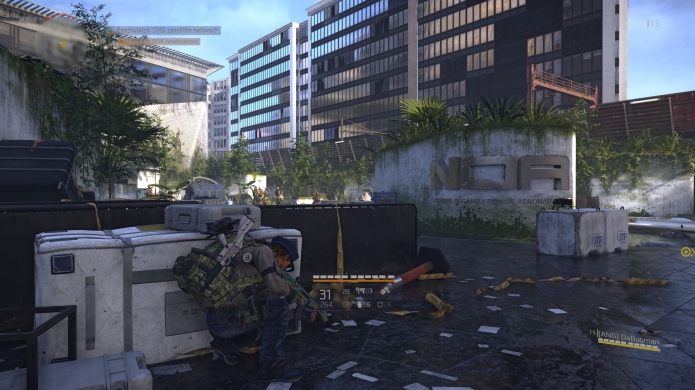 Visiting the Air & Space Museum is not only a treat in that you can look up and witness a planetarium demonstration or read a plaque to learn about a vintage plane hanging from the large ceiling, doing so in an empty building housing a para-military group looking to score missile systems adds a post-apocalyptic civil-war feel to the idea of being a tourist. There’s context to be found too, with control points found throughout D.C. serving as mini-capture missions. Where you’ll not only get access to a generous loot room as a reward but also get to see and utilise friendly survivors to patrol a small section of the city streets, helping to keep enemy faction numbers down.

"Where the original provided a solid third-person cover-based shooter as the sole reason to keep delving deeper into its immersive city, The Division 2 cleverly employs its new location to contextualise the variety."


They’ll also provide resources to nearby settlements, which can be upgraded with amenities and things like clean power and clean drinking water. Of course, The Division 2 isn’t Cities: Skylines or a real-time strategy sim, nor does it attempt to be. The live and ever-changing nature of the city (especially in the endgame portion) allows both citizens to go on expeditions from freshly captured control points to collect resources, but also enemy factions from nearby strongholds to send out patrol squads to attack friendly targets. Mostly set dressing taken to the next level, it results in exploration that never feels like anything but roaming the streets of a chaotic and unpredictable war zone. 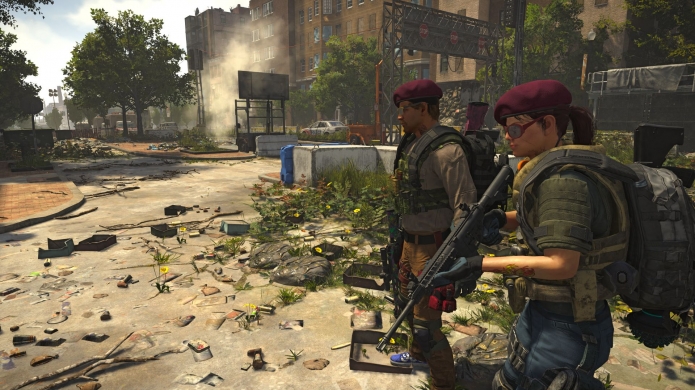 In the case of the original The Division the city remained as static and motion-less as the frozen vehicles strewn throughout. Variety took time to emerge, but never factored into the design in the way it does with The Division 2’s D.C. A sentiment that also applies to the post-launch philosophical loot change that resulted in the first game eventually rewarding players for the time spent – whether it was for an hour or ten. A transformation that was in many ways a longform representation of perhaps the action-RPG genre’s greatest comeback story - the release of Diablo III’s Reaper of Souls expansion and the arrival of Loot 2.0 to Blizzard’s classic.

For The Division 2, the original game’s eventual Loot 2.0 is here from the start. Where continued access to new and more powerful weapons and gear right from the beginning is the order of the day. And in turn has led to some welcome and clever new design decisions. Although set items are due in a future update, the introduction of brands and brand bonuses adds incentive to mix and match different bits of gear for set-like bonuses. Weapon mods offer both reward and penalty, in a move that both grates and makes sense, and for the first-time gear mods introduce even more abilities to buff or alter stats with offensive and defensive buffs. 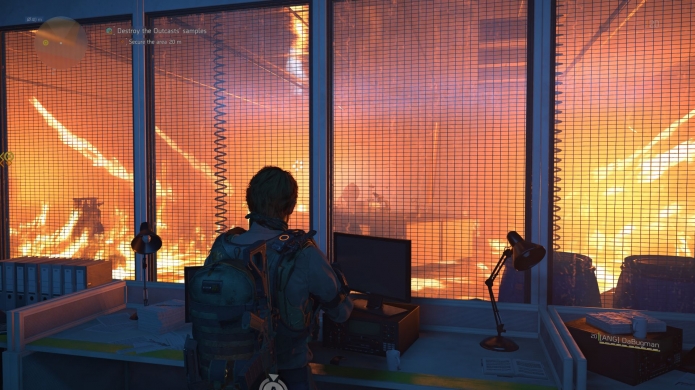 And in a strange twist for the genre, it’s wrapped up in a reward system that errs on the side of perhaps being a little too generous. Upping the number of skills and gadgets at your disposal feels a little similar, with the addition of various combat drones, turrets, mines, and shields adding to the overwhelming nature of the detail. Especially when classes and specialisations are relegated to the endgame - the lack of limitation or build focus can be a burden. Not that you’ll complain when a string of high-end loot drops after completing a particularly challenging bounty.

"... exploration that never feel like anything but roaming the streets of a chaotic and unpredictable war zone."


Above all though, the renewed focus on variety and generous rewards ensures that The Division 2’s journey is as satisfying and in-depth and engaging and challenging as anything one might find later. An achievement that negates the need to place an emphasis on the finish line, or what comes next. If you were to take a step back after completing the final Stronghold story mission to marvel and then walk away from the experience entirely – The Division 2 remains brilliant. A lengthy experience that lasts up to 40 hours without ever repeating the same mission or revisiting the same location. 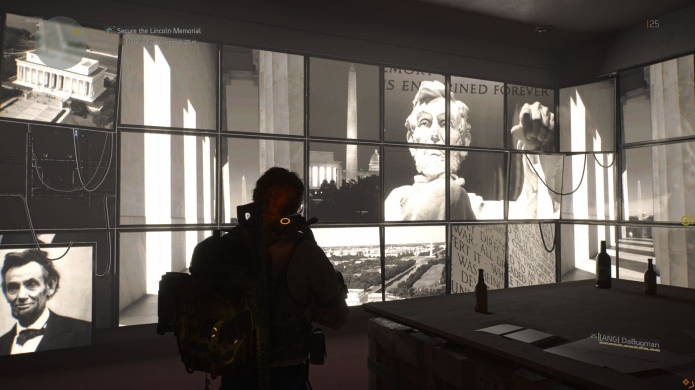 This in turn makes the actual endgame something of a minor miracle. A ‘New Game Plus’ of sorts that introduces a new and tougher enemy faction, with renewed narrative incentive to revisit and replay and re-tread ground you might have covered hours earlier. In such a way that evolves the genre – making the concept of simply replaying a story mission without context feel cheap. The endgame also reintroduces the concept of Gear Score, MMO-like World Tiers, Specializations that act as interchangeable classes of sorts, daily and weekly challenges, with the promise of new missions, raids, and more right around the corner.

There’s so much here that diving back in once the story wraps up, feels natural and something you’ll actively want to do. Even if it’s simply to head into the Dark Zone proper and see what the new and improved version of The Division’s unique take on PvPvE feels like. In the end, the fact that The Division 2 excels at getting to this point – providing satisfying and rewarding loot and an embarrassment of riches when it comes to variety, is a testament to the development team’s efforts. The refined combat, improved AI, and other elements overshadow any detriments and lingering bugs. The Division 2 is not only a refined follow-up, it’s the arguably the best ‘looter shooter’ this generation has seen.
Latest Comments
Commenting has been locked for this item.
Follow Us
Latest Reviews
More...
News Feed
Advertisement
Latest Threads
Log In
Create Account | Lost your password?