If you’ve watched the first episode of HBO’s epic new fantasy series Game of Thrones, at the very least you would have marveled at the production values, acting, and maturity of the story being presented. But chances are you were also left a little confused, what with all the name dropping involving royalty, nobles, distant lands, inter-family feuds, mythical dragons, and the death of an important person with the job title The King’s Hand. The fact that the show was presented in a “watch it, but don’t expect villains in black or puffy shirt nobles to talk in massive chunks of exposition” style proved to be an incredibly bold approach, and one that succeeded quite considerably and paid off in dividends in future episodes.

The first few hours of The Witcher 2: Assassins of Kings shares many similarities, as even though you will marvel at the visuals, art direction, great voice acting and incredible music score, you will also be left a little confused. Because apart from learning about a hand job ending in an untimely demise, you will need to pay attention as you’re introduced to a fantasy world as rich, dense, and unpredictable as the one seen in Game of Thrones. In addition to being both detailed and complex, the world of The Witcher is also quite gruesome as it’s centered on a compelling story with no real obvious moral center. With an unknown party systematically assassinating various kings, the Northern Kingdoms are thrown into chaos with all imaginable problems centered on race, class, greed, revenge, and war becoming a part of everyday life. 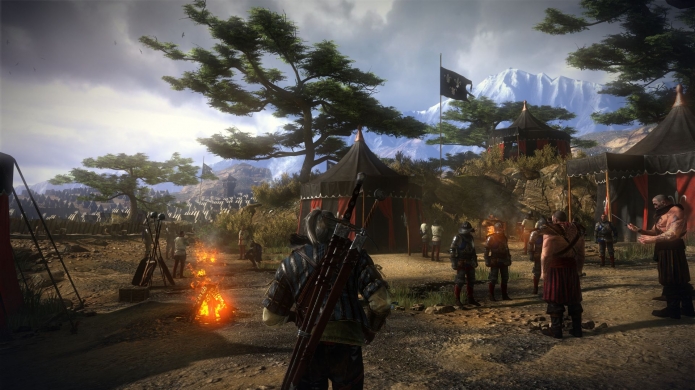 In the game’s first town, Flotsam, built next to a remote riverside trading port, the full effect of this chaos is felt across every character as well as the town itself. Overrun by a corrupt official hell bent on implementing a state of militia rule as well as persecuting any and all non-humans, such as Dwarves but more importantly an elven race of forest dwellers known as the Scoia'tael, the town is also beset by a large underwater monster. A monster so large and menacing (it has huge tentacles for a start) that it has also put a halt to all trading in Flotsam, in addition to the usual wanton killing and destruction.

With rampant racial and gender prosecution, poverty, greed, and murder putting the very fate of Flotsam in question, players will take control of renowned Witcher and monster slayer, Geralt of Rivia, as he not only tries to unravel the conspiracy surrounding the royal murders and a plot threatening to change the world itself, but also the fate of Flotsam. Slaying the monster will be no easy feat and throughout this quest he will need to deal directly with all factions within and around Flotsam, choosing to aid or alienate the corrupt official, deal with the Scoia'tael, and choose to investigate or ignore a dark part of the town’s history involving torture, rape, and spectral curses.

Based on this description alone, you would assume that Flotsam would be a grim place to visit, let alone somewhere you would want to spend a considerable amount of time in. In fact, thanks in part to its mature themes and diverse cast of characters, the overall world of The Witcher sounds well, like a pretty shit place to live. But the very first impression one has with this game, is a general sense of awe at the visual fidelity on display not only in terms of pure graphical and technical excellence but in the astounding art direction and detail put into each environment that literally brings the world to life. 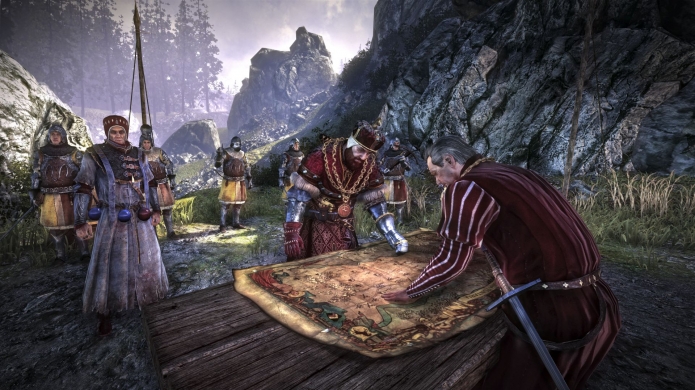 Take Flotsam for example, a place that sounds like it would be a dark, grimy, and overall “grey” place to inhabit. As presented in the game, Flotsam is a rustic looking trading town, with classic architecture, all brought to life with wonderful detail and more importantly, an amazing use of colour.

Walking through the streets at night, as your surroundings are lit by the blue moonlight, the orange glow of fire will add light to nearby walkways whilst also masking a tiny layer of mist and fog that rolls though the streets. As you turn into a back alley, you’ll be confronted by some thugs, looking to make a quick score by claiming the bounty on your head. Although the colour of their varied clothing has dulled from the moonlight, their blades glisten, and as you spill their blood onto a nearby window that seemingly glows from the light and the heat emanating from inside.

As impressive as it is seeing rays of light pass through individual branches of the many large, impressive, and vibrant trees in the game’s forest areas, or even viewing fires rage all around you as you make your way through a battlefield during sunset, the fact that the game looks absolutely amazing during quiet night-time sequences speaks volumes to the overall level of detail and care that has gone into making this one of the best looking RPG’s to date. And even though you can speak to various characters and pick up side-quests that will send you exploring into the surrounding areas, such as the dangerous forest outside Flotsam, the sheer beauty of the environments themselves in most cases, will be enough incentive to go for a wander to see what lurks just around each corner. From river beds to moss covered stone artifacts, to lush vegetation surrounding a waterfall the world is quite something to behold, and always looks and feels natural. But it’s also a dangerous place, as these strolls are never quiet and usually end up with you being surrounded by a group of creatures, such as the imp like Nekkers, ready to violently put an end to your adventure. 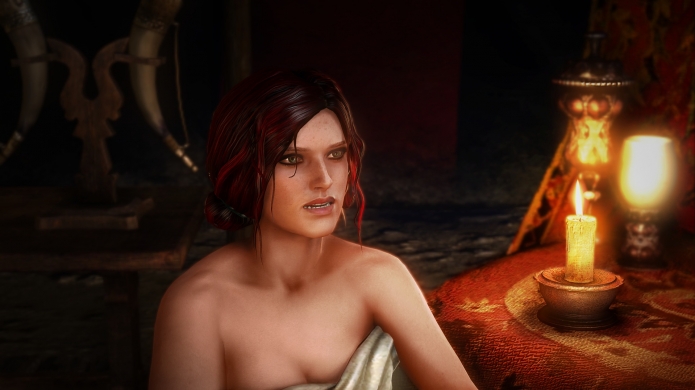 Combat in the game is presented in a very action-heavy way, almost to the point where a passerby might mistake it for a standard hack-and-slash game, where spamming buttons and performing combos are the order of the day. In actual fact, the combat system implemented is quite different, and extremely difficult to come to grips with thanks in part to a tutorial system that is largely absent and a difficulty curve that could be described as ‘sadistic’. This no doubt, will be the main point of contention for anyone who plays this game, and will probably move many to turn the game’s difficult down as a means to make it more palatable - but there’s something a little old school about not really caring if players can’t keep up with the game mechanics.

So yes, the first few enemy encounters in the game are ludicrously difficult, and you’ll quickly realise that when faced with a group of enemies they’ll quickly work together to surround you and try and hit you from all angles, including the time-old classic of a sword to the back. Being an RPG, getting hit in the back means that the damage taken is amplified as is the time taken to recover from being stunned and be able to retaliate. Combat-wise you’re definitely thrown into the deep end with no real tutorial or even strategy clearly presented, meaning that the early parts of the game can get frustratingly difficult, and at times feel more than a little ridiculous. But eventually (with the time depending on your natural gaming ability) you’ll come to the realisation that being a Witcher means that you’ll have no choice but to use a combination of magic, bombs, traps, ranged weaponry, in the addition to standard sword-play to better your foes. This is when the role-playing nature of the game truly becomes apparent.

It’s quite an impressive system that has been implemented, with leveling up tied directly to how you fight. If you find that building traps and bombs, in conjunction with swordplay is the strategy that works best for you, then instead of leveling attributes, you add skill points direct to numerous abilities along a specific skill tree. This means that you can add points to increase the effectiveness of all potions and bombs you create as well as the ability to be able to strike multiple enemies at once after you’ve managed to stun them. For the most part this works exceptionally well, but in later parts of the game, with the right skill distribution the combat can become incredibly easy and a polar opposite experience to the one had within the first ten or so hours of the game. Again it’s quite an impressive system, and one that definitely works, but it’s also one that is executed quite clumsily. 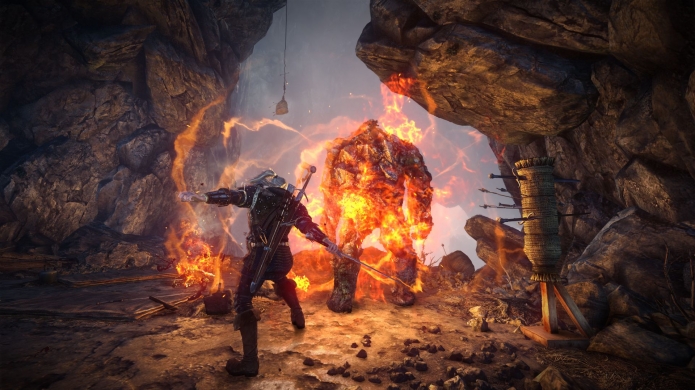 With the role-playing aspect of RPG here clearly tied to the role of controlling the white-haired Witcher Geralt of Rivia across combat, the same is also applied directly to the story. Although presented in a linear fashion, there are a surprising number of choices to be made within the game that extend beyond picking a side between two feuding parties, that branch off the narrative that can even effect locations visited and the number of quests available. This means that two players can have very different experiences when playing the game depending on the choices they make, including many that aren’t really telegraphed like other games tend to do, and many that will be made based on incomplete information on hand, and based purely on trust.

The narrative and gameplay however does fall short of truly being epic, as there are many moments in the game that feel like they could have been improved or even expanded upon. The ending although satisfying and impressive in the way it leaves many questions answered, does feel a little rushed in the quick manner players are almost forced to reach the climax. Ambiguity in a narrative, especially one that is based on a complex story is something to be commended, but in a game it can be a tricky thing to pull off, and The Witcher 2 almost gets it right.

But as an RPG, currently exclusive to PC, this comes highly recommended as it provides a compelling and mature story, great combat (eventually), all wrapped up in what is clearly one of the most visually impressive games to be released in a long time.
Latest Comments
Link