Telltale’s problem has always been that they nail the writing and tone of the IP they’re given to work on, while never quite mastering the adventure genre they frame their action through. The puzzles in their games are rarely as sharp as you’d like them to be, and the recent Jurassic Park game was a messy affair of QTEs and disappointment. The Walking Dead’s first episode, ‘A New Day’, succeeds where some of their past adventures have failed not by fixing the issues that often hold their games back, but by placing a greater importance on the presentation and character work that the team handles best.

Set within the universe of Robert Kirkman’s acclaimed comic series rather than AMC’s decent but meandering TV series (complete with awesome comic-esque cel-shaded graphics), A New Day kicks off very shortly after the zombie outbreak begins. The exact time-frame is poorly detailed, in that within minutes of first encountering zombies you’ll find yourself surrounded by characters already well acquainted with the logistics of the outbreak, but that’s not hugely important. 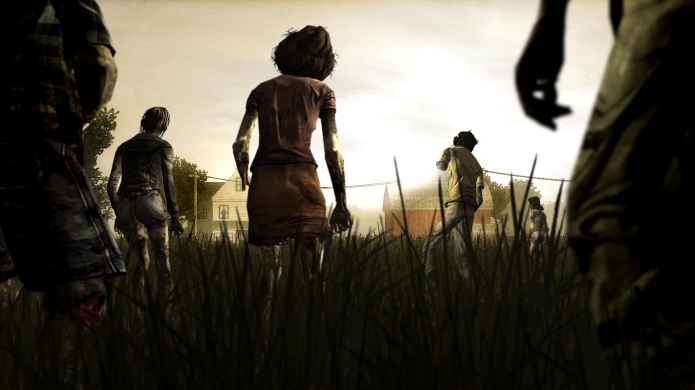 Protagonist Lee Everett is on his way to prison when the game begins, having been charged with the murder of a US senator who was sleeping with his wife. This being the first episode, we never find out exactly what happened, but thanks to the game’s RPG-esque dialog choice system, you’ll come away from this first episode with some ideas on what kind of man the Lee in your game is.
Right near the beginning you’ll encounter Clementine, an adorable little girl who has been living alone in her treehouse for some time now, with her parents interstate (presumed dead) and her carer now reanimated. Clementine is, naturally enough, the game’s heart, and she’s written more genuinely than any of the kids in the books are. In fact, the writing is great across the board. You’ll stumble across a few characters from the series, but most of them are brand new creations who fit into the established universe seamlessly, and who are genuinely interesting to talk to.

There’s one absurdly bad line of dialog at the midway point that threatens to unhinge the whole thing (hint if you’re on the lookout: it’s about batteries), but the tone is spot-on. Each character is searching for reasons to endure the hardships ahead, and the comic’s depiction of the inevitable collapse of human decency is hinted at well in these early days of the outbreak.

The Walking Dead hinges on the aforementioned dialog choices. You’ll be informed of the reactions to the people around you to the things you say; a character might call you on a lie you’ve told, appreciate your compassion towards another person, or chastise you for making a choice they don’t agree with. You can even choose to stay silent in most conversations if you have no response, and deal with the potential fallout of not being forthcoming. You’re asked to make several decisions over the course of the episode, ranging from minor conversation choices to choosing who to save when two people are being attacked simultaneously. I spotted one moment of inconsistency – a character referring to Lee as Clementine’s father when he’d been told he wasn’t – but for the most part the system works well. It’s a shame, really, that The Walking Dead has been split into five parts when your choices so obviously carry through, and the system is so effective that we’re now desperate to see how things pan out. 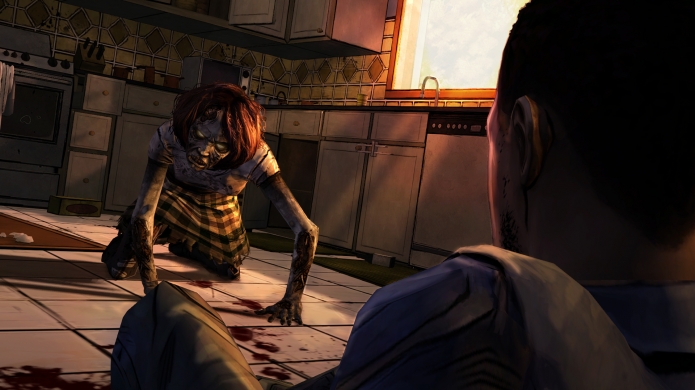 The puzzles and action sequences are, mechanically, nothing to write home about, but Telltale has effectively marginalised their importance. Adventure games are rarely tense, but the game’s sense of consequence means that your every move takes on a heightened significance, despite how easy the game is. Every now and again a zombie will get up in your face and you’ll need to fight them off, which is as simple as hammering the Q button or clicking away at their faces, but your investment in the characters makes each perilous scenario exciting.

The game is, unfortunately, a little glitchy. Sound doesn’t always cut in at the right point, cut-scenes can stall, and I had the game freeze on me once near the start (I’ve heard reports of it happening at other points too). Nothing too serious, but I hope future episodes are a little more stable.

It’s all over in about two hours, making A New Day short even by Telltale standards. Still, we should end up with a ten-odd hour adventure for about the same price as a thin volume of the comics, and so far it’s just as compelling as Kirkman’s work. If the rest of the episodes fulfil the promises of the first one, this will be Telltale’s best series yet.