Available now for PlayStation 4 and PC, The Swords of Ditto offers up a visual feast with its fantasy-by-the-way-of-small-child’s-bedroom take on classic top-down Zelda. Also, it mixes things up with rougelike elements where every time you die a new hero emerges 100 years later. To find the Sword of Ditto and have at it again. 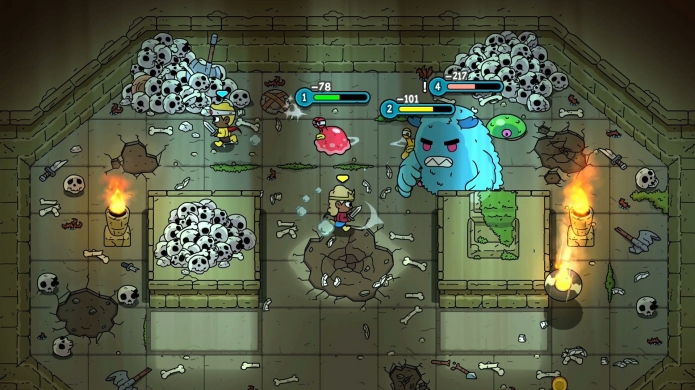 In Swords of Ditto every time you die you respawn as a new hero. 100 years later, and with five in-game days to get powerful enough before the final showdown is triggered. Embarking on this quest, through time, is a core part of the design. Thematically and visually speaking, it’s executed brilliantly. Coming back as a small child dressed in black, one that wears a cape, a cute frog creature, or a lego-like block with big eyes, keeps the journey feeling diverse and interesting. As does watching what happens to the world around you thanks to the mix of detailed hand-drawn art and procedural generation.

From buildings that decay over time through to more danger lurking around because your previous quest failed before it even began. As a new playable hero progression is mostly limited to the mythical Sword of Ditto. Where dispatching creatures, zombies, and sentient plant life, serve to give it a dash of XP. Where it can then go from Level 1 to Level 10 across several hours.