For years the allure of the Fallout universe has been its dark comedic undertone. Outside of the now almost mascot-level prevalence of the Pip Boy character, it’s the satirical edge of Fallout’s post-apocalyptic world - where humanity in all forms exists in a state of perpetual futility - that resonates. Skirting a fine line between cynicism and outright farce, Fallout is at its finest when it manages to tell engaging character-driven stories within the framework of a world built on indirectly highlighting and exaggerating real-world elements. From corporate excess, to military excess, to the concept of a robot built to protect and serve - suddenly gone rogue.

Obsidian’s latest role-playing game shares a direct relationship to Fallout, in part because it’s a project headed up by those that created the franchise back at Interplay in the 1990s. Visually and in terms of its interface and presentation, one could easily make the direct correlation between The Outer Worlds and modern-day Bethesda Fallout. From the first-person presentation, the dialogue system, FPS combat, terminals to hack and glean info from, and even the way you loot fallen enemies.

There’s a lot here, at a glance, that gives the impression that The Outer Worlds is essentially Fallout: In Space. Another relationship directly born from a development team also comprised of key talent that worked on Fallout: New Vegas.

But it’s The Outer Worlds dark comedic undertones that are the most, well, Fallout. Set in the distant future, one where humanity is colonising distant worlds and systems, the story begins after you’re awoken from hibernation to discover that life in the corporate run Halcyon system is not as idyllic as it seems. Or should be. Beginning your journey to ultimately try and un-freeze those aboard the long-lost colonial freighter called Hope, you’re set loose in the almost wild-west frontier town of Edgewater - run by well-known maker of mass-market goods, Spacer’s Choice.

"Obsidian’s latest role-playing game shares a direct relationship to Fallout, in part because it’s a project headed up by those that created the franchise back at Interplay in the 1990s.”


A town where all citizens are company born and bred, to the point where they’re more like commodities and assets tucked away in a space-age spreadsheet than individuals. A Spacer’s Choice town where the value of an employee is determined by the bottom line. Which in turn determines their allotment of things like food, water, and medicine. There’s a level of indoctrination on display from the get-go that verges on the bleak and depressing, but thankfully it all quickly becomes darkly comic and vibrant – thanks in part to the colourful visuals, alien flora, skies filled with celestial wonders, corporate propaganda spouting amusing taglines, and the engaging dialogue. 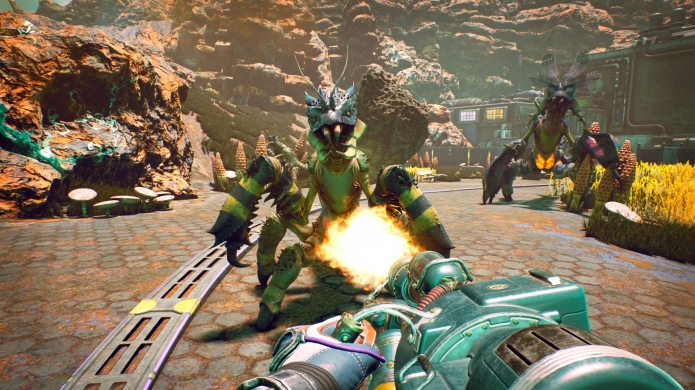 Take the example of what happens when you die, where as part of a side-quest you learn that taxes need to be paid for burial and other post-death expenses. This falls to the person most closely linked to the recently departed. Choosing to offer condolences, as one of the many diverse dialogue responses on offer, you’re met with a look of confusion. In its corporate wisdom, and mad genius, the person closest to someone when they pass is the one physically closest to them. As in the person standing right there. A Spacer’s Choice rule that burdens unwitting employees with additional expenses and servitude.

This is the tone found throughout most of The Outer Worlds, where the absurd extremes of corporate excess and bureaucracy blends with the sense of discovery and excitement that comes from traveling through space to colonise distant planets. Where helping someone in need and embarking on a quest into an abandoned science facility results in discovering a valuable formula based on experiments carried out on local alien life - for diet toothpaste. Something that could be used to suppress an employee’s appetite in order to cut down on food costs. Return it to Spacer’s Choice or sell it to a competing corporation for profit. The choice is yours.

The fact that Obsidian has managed to create mostly engaging stories with memorable characters in this sort of setting is a testament to the studio’s talent. Which in recent years has created some wonderfully rich RPG narratives – as seen in the likes of Pillars of Eternity II and Tyranny. The Outer Worlds though, is as focused on the darkly comic as it is themes like redemption and salvation. Offering just as much justification for siding with murderous separatists for the fun of it as it does to the prospect of unifying the more level-headed freedom fighters with bureaucratic leaders obsessed with employee reviews. Number crunchers that are completely out of their depth.

It’s a balance and, again, tone that can quickly go from amusing to dull, distant, and cold if it doesn’t quite click or gel with one’s sensibilities.

"... the absurd extremes of corporate excess and bureaucracy blends with the sense of discovery and excitement that comes from traveling through space to colonise distant planets”


Although The Outer Worlds offers up an engaging RPG narrative where choice is governed by one’s own skills and relationships, it doesn’t offer a large open-world or star system to explore in any sort of realistic non-linear fashion. Play-areas are more reminiscent of the environments and levels found in something like Star Wars: Knights of the Old Republic II. Which is another Obsidian joint from back in the day. It’s a setup like with the almost abridged and quickened skill system, which groups things like stealth and conversation skills together to allow for quickly shifting focus from say hacking to lockpicking, comes from the fact that The Outer Worlds was developed by relatively small team. Especially when compared to what we might consider a AAA title.

In many ways, reminding yourself that this pre-Microsoft-owned project from Obsidian is the studio’s last indie effort - which helps manage some of the more grandiose expectations one could have.

There is a detriment to the smaller, well, size of The Outer Worlds. Early moments and environments begin to feel a little too linear and claustrophobic, adversely affect the feeling of immersion. Especially when it comes to combat – with many locations feeling like a couple of rooms stitched together as opposed to the sort of ‘dungeon-like’ experience one got from Fallout’s Vaults or abandoned buildings. This is a shame because one area where The Outer Worlds shines comes with its first-person combat. Which feels responsive and intuitive in a way that strikes a better balance between what skills you choose to invest in with that of actual twitch-like first-person player skills than Fallout 3, 4, or New Vegas ever did.

Calling on companion abilities, healing, slowing down time to get off a few precision shots – it’s refreshing to see some, well, jank-free and engaging action with this style of presentation. On the small-in-size front, things do improve in the second-half as locations become larger and more detailed.

Unfortunately, there’s just not much outside of drilling down into the minutiae of lore once The Outer Worlds opens up. Well, that’s not entirely true. The addition of hard-to-find prototype Science Weapons like shrink rays and mind-control rays modelled in the fashion of 1950s sci-fi, is a welcome touch. Both for adding that feeling of finding some sort of hard-to-reach treasure and for the fact that using the shrink ray on unsuspecting Marauders is fun.

"One area where The Outer Worlds shines comes with its first-person combat.”


From the animation to space-age vistas, the visuals are often stunning in The Outer Worlds – offering up the sort of ‘still-bright-at-night’ look that feels like colourful and impressive sci-fi concept art come to life. Which, due to that friendly ‘this is still an indie’ reminder is both a blessing and a curse. For the most part the day-night system is for-show only – with the results feeling as static and frozen as a piece of artwork at times. Characters and NPCs stick to their designated geographic location for the duration of the adventure, with little in way of bustling traffic or dynamic environments to give Halcyon an additional layer of life. 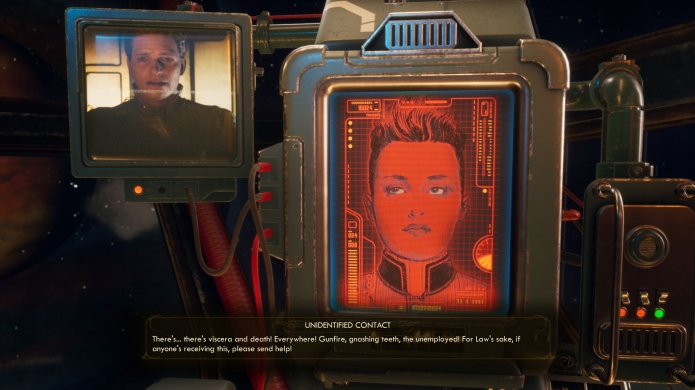 Performance-wise it all runs great though, with a level of polish that is as surprising as it is welcome. In our 30-hour or so playthrough (which covered most, if not all, side-quests and activities) we only experienced one notable bug – which saw a companion die abruptly and for no reason in the comfort of her room aboard The Unreliable. Reloading an autosave from moments earlier rectified that situation, whilst also getting rid of the strange appearance of space cows eating grass in the hold. Both issues were funnier than they were frustrating.

The Outer Worlds, as per this very review, will be compared to Fallout by many who play it. And really, it’s the sort of comparison that will probably benefit Obsidian’s latest RPG in the long run. Because in the end, Halcyon and its many denizens, corporations, and quirks feel like an original creation worthy of this style of RPG. And much like with the original Fallout, a place well worth visiting again in a larger and more expansive experience. Like, say, in The Outer Worlds 2.
Follow Us
Latest Reviews
More...
News Feed
Advertisement
Latest Threads
Log In
Create Account | Lost your password?