An entry level take on a well-worn genre that after a few hours will have you heading for the exit.
Minecraft Dungeons Review - Between a Block and a Hard Place 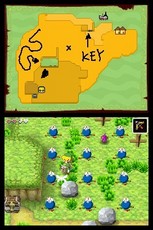 What’s interesting with most Zelda titles is it’s actually really difficult to relate them to any other videogame series. Invariably what you end up doing is comparing the latest offering to the one before it and so on, but with Phantom Hour Glass things are a little different. Here, the best way to look at this game isn’t by comparing it to Twilight Princess, but by comparing it to the DS. Or rather, looking at what the game has managed to do with the DS hardware in the face of all the Zelda gameplay hallmarks we’ve come to expect from every iteration in the series. So, we end up looking at a game that, yes successfully continues the story we left with Wind Waker, and yes manages to capture the design and style of that particular instalment in the Zelda franchise, but also kicks things up a notch by not only offering arguably the best-looking game on the DS, but also the most innovative. It’s true there are games that are incredibly unique in the way in which they use the DS, but on the whole, across the entire expanse of Phantom Hour Glass, the way in which you utilise all of the DS’s functionality fleshes out the most complete gameplay experience on the system yet. In short, unlike many other titles on DS, Phantom Hour Glass is not a one-trick pony.

As mentioned above, this is a true sequel to The Legend of Zelda: Wind Waker. It is actually pretty rare for this namesake to follow-on with true sequels (the last true follow-up was Majora’s Mask to Ocarina of Time), but as far as they go, this one is right up there. 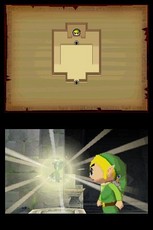 Events kick off pretty soon after the end of Wind Waker. Link is still hanging out with the Pirates who are now – at the bequest of their tenacious captain, Tetra – looking for the legendary Ghost Ship, a vessel that sails the seas and is said to steal the souls of any who come near it. Tetra, however, doesn’t believe it’s a Ghost Ship and aims to defraud the pirates responsible, and teach them a lesson in the process. When they arrive where the ship supposedly appears, it does just that and as you’d expect, adventure pumping through her veins, Tetra leaps aboard. However, just as the stories that have been circling say, it turns out the ship is actually quite nasty and our newly distressed damsel is in need of some rescuing. Link, being the courageous mite he is, leaps at the Ghost Ship after her, but like the opening scene in Wind Waker, misses and instead lands in the water. Pretty soon you wake up, washed ashore on an island, with no clue as to the whereabouts of your pirate friends, Tetra or the dreaded Ghost Ship.

From this point on you meet Ciela, a fairy who instructs you in everything Zelda DS. She’s a bit like Navi from Ocarina of Time only far less annoying. Ciela takes you to her Grandfather, and after a bit of instruction, you’re left to your own devices to learn to play this all-new, pocket-sized adventure. 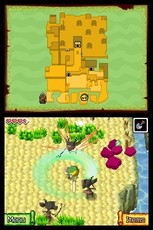 Almost everything you do in Phantom Hour Glass is done with the stylus. Moving, fighting, navigating – everything. The camera view-point is pseudo isometric and allows you to get a good scope of the land around you. Link is controlled by simply drawing a path for him along the touch pad. You can set a pace and he’ll run it, or you can make him walk by drawing a slow line. It’s incredibly precise and offers both a new way to look at DS adventure games, and Zelda games in general. Battle too, is controlled with the stylus. Once you have your sword you have three basic ways to fight. The first is a simple jump attack that will end up being your favourite; see an enemy, tap it with the stylus and Link will jump and attack immediately. You can tap multiple enemies and he’ll quickly take them out one by one. You can also simply slash about, both while standing still or moving and finally you have your trusty spin attack, and given the action used to perform it is self-explanatory, Nintendo did a good job of throwing in a seminal meter in the way of making Link dizzy if he does it too much. 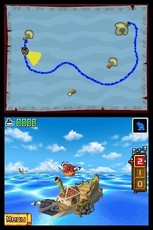 It doesn’t end there though. The stylus becomes your best-friend in many ways. Travelling the water, for instance, is no longer a continuous action on your part like it was in Wind Waker – here you pull out a Sea Chart and draw your path. Then once you’re satisfied with your heading, select “Go” and the ship heads that way. You have full 360 degree control of the camera once you’re moving, and eventually you’ll get a canon and winch upgrade for your ship which really opens up the seafaring portion of the game. You can also collect other ship parts and have them added to your vessel throughout your journey at the local ship yard – Pimp My Boat, Zelda style. Speaking of which, it’s actually not really your ship, so to speak, it actually belongs to a captain by the name of Linebeck. He’s one of the first major people you meet in the game, and in typical Nintendo fashion, is completely and utterly over-the-top; he talks a big game but when it comes down to the nitty gritty of adventuring, he hands it all over to you and Ciela, however, that isn’t to say he doesn’t have a major part in the game, he just doesn’t want to steal your thunder. 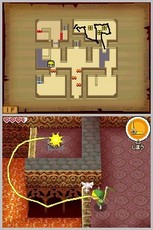 Other stylus actions come in the way of notation. As with most Zelda games, the full-bodied world of Hyrule is replete with people needing help, hidden secrets and other side-quests, and Phantom Hour Glass is no different. Well, actually, it is in a certain way. The quests, people and secrets are all there, only in this iteration of the series, it’s more of a mystery type of discovery in that, you’re not always directly offered the quest, secret or problem. More often than not you’re given clues and hints you need to take note of, but thankfully bringing up your map means you can actually make notes on it with the stylus that will remain there the entire game unless you erase them. Each island you visit comes with its own map you can mark, and you can literally write or draw anything you want. It would have been great if the game came with a virtual “personal journal” you could make entries in, but as it stands, it’s not that deep or challenging to really require it, but it would have been cool, nonetheless. 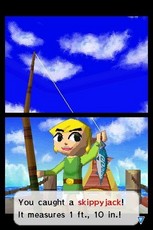 Beyond the stylus interaction, all the usual Zelda hallmarks are here: Rupees, Grass, a Boomerang, a Bow, Bombs and Bombags, Gorons, Mail and more. There’s more than enough Zelda history crammed into this little gem, and it’s all perfectly woven into this extended story. Gameplay sees you scouring the seas in search of three Spirits of Power, these then allow you to gain more access to the game’s main dungeon, the Temple of the Ocean King. This temple is located on the game’s main island, Mercay Island. It’s here you can upgrade your ship, speak to Oshus, discover the whereabouts of new treasure, and, of course, go deeper into the Temple of the Ocean King. The temple itself is clouded by a toxic gas that sucks the life right out of you unless you stand on special squares, but of even more importance is the Phantom Hour Glass. Once you’ve discovered this device it will allow you to traverse the dungeon unabated by the gas, however, as it is an hour glass, you’re only as safe as how much sand is left in the top, ergo the next step is to gradually add more and more sand by finding the Spirits of Power. On top of all this is the quest to find the truth behind the Ghost Ship and save Tetra from certain doom. 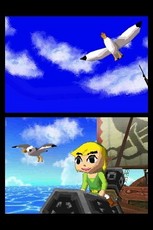 The pacing throughout Phantom Hour Glass is unparalleled on the system and could easily take on other games on even more powerful consoles. It is a little on the easy side for seasoned Zelda players, but it’s still an incredible amount of fun. Plus, if you really are a season player, chances are you’re going to explore every secret the sea and islands have to offer, and then some. In the visual department their simply aren’t any better than this. Phantom Hour Glass trumps most games that were ever released on the N64, and holds it’s own against its predecessor, Wind Waker, thanks largely to the small screen and the breeze at which the engine runs. From an aural perspective, Phantom Hour Glass comes out more than on top – even without headphones the stereo sound is unbelievable in clarity with a score to die-for as well as all the right bleeps and bops you’ve come to expect from the Zelda series. The only real issues here are longevity, and the occasional visual obstacle in the way of your hand obstructing your field of view every once and while, but sit down with the game long enough and you’ll get used to it. At this stage I’ll go as far as saying there simply isn’t a better experience to be had on the DS, and it would be awesome if the Wind Waker-sparked Zelda series remained at home – from here on out – on the DS.
Latest Comments
Link