Every hardcore gamer has their benchmark title, and for me it has always been The Legend of Zelda: Ocarina of Time. There are numerous reasons most of you would probably understand for me holding such a torch for this game, but ultimately it actually sparked my transition from working in the suited up corporate world (of which there’s nothing wrong if that’s your chosen path), to videogame journalist.

Emotionally-attached nostalgia aside though, Ocarina of Time is rightly considered by many to be one of the greatest games of all time. The reasons for this are vast, but I would argue it’s simply based on pacing and poise, in that you were never rushed through a single component of Link’s Nintendo 64 adventure, and the gameplay variety that sprung forth from every hidden nook and cranny in the (for its time) lush, open and varied game-world of Hyrule kept the entire experience constantly new and fresh. Within the game Link grew from a boy to a young adult, and you - as the player - felt that growth and maturity, every step of the way. 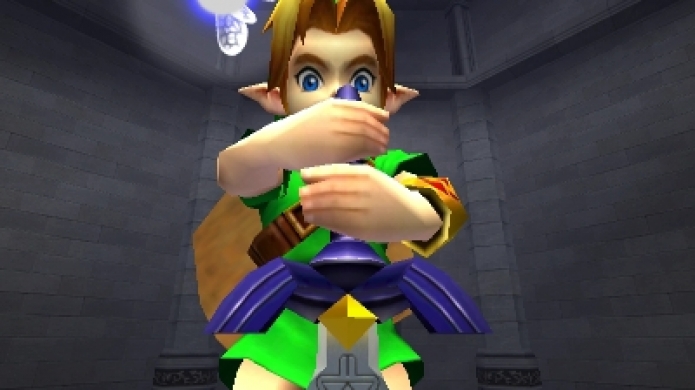 There have been many re-releases of Ocarina of Time, most notably on the GameCube in Zelda bundles, but those games were largely unchanged from the original. What brings us here today is the first significant update to the game since its original release in 1998, with its handheld debut on Nintendo’s new 3DS console. The obvious inclusion is, of course, stereoscopic 3D, but a lot of work has also gone into new, updated (and more detailed) textures, more life in the game-world in the way of plant-life, particles and lighting, along with a total revamp of character models, animations and more.

You could argue that it didn’t need to change, but I challenge anyone to play this and not see that, while minor, they add to the experience immeasurably. The game runs at a proper 30-fps (the original didn’t), and looks silky smooth on the 3DS screen at its smaller resolution (tricking the eye into seeing a HDish OoT). The 3D itself really is the cream of the crop here though, and it’s the most immersed I’ve felt in a 3D world while playing videogames. I really feel for that 10% of people in the world who can’t actually experience it in full, or for anyone who happens to not be able to stand it for any extended period of time.

On that note, Nintendo have been very careful to maintain their parental-like concern over user-health, with the always annoying Navi popping up every 30-minutes or so to ask if you feel you should take a rest from playing. Also, annoyingly on the Navi front, she’s back as your guiding fairy hand with no way to turn her off. There’s nothing more frustrating than hearing her “HEY!” only to have her tell you to do exactly what it is you’re currently doing. Nintendo would have been better off realising many of us have played the death out of this game, and that an option to silence her would be a welcome one indeed. 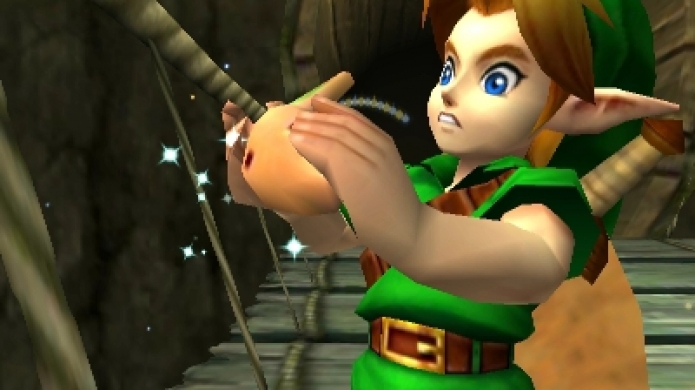 But honestly, beyond that gripe (and the silly inclusion of Tutorial Stones, which you can ignore), the game is still as brilliant as ever. And any discerning player who’s never dabbled in this Hyrule before, will clearly see where so many other games pulled, or borrowed, their core mechanics from. However, unlike other games, many of which are current, Ocarina of Time is a veritable Swiss-army knife when it comes to mechanics; shifting in and out of so many styles of gameplay (which the game itself invented a lot of), it’s hard to pinpoint precisely what it is, even by today’s over-saturated genre-labelling standards.

If you’re unfamiliar with what’s in store for you, the Legend of Zelda series is the ultimate coming of age story, and Ocarina of Time the ideology’s plateau. Essentially you take on the green garb of a young boy named Link, who exists within a hidden forest full of other foresty-type kids. The only difference here is, unlike the other children, or “Kokiri”, Link is without a guiding fairy - a situation he is oft made fun of for.

However, like any good story of this nature we, as the player, come into the game upon a fairy finally selecting Link (ala us), so that his epic tale of saving the world can begin; shunning those who belittled him for being different, without so much as a direct rebuttal - it's all in your actions. Classic and empowering.

What follows is among the first truly open-world games where player choice and progression, for the first time ever, felt all-powerful. Sure there’s a guiding line of what major missions you need to do next, and plenty of areas or items locked out to the player early on, but all of this was done in an effort to spark a desire to push on so as to gain the ability to move beyond that clearly bomb-destroyable wall, or over that crevice with the broken bridge. The fact you could find these impediments in your own time was the point - you knew they existed, and therefore wanted to grow with the main character to unlock what clear goodies lay beyond. 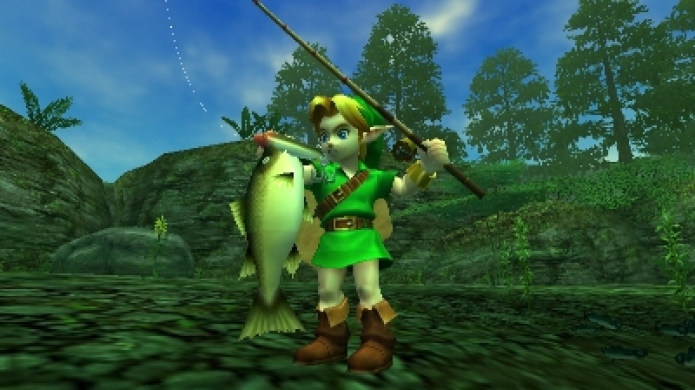 It’s as I mentioned at the beginning, Ocarina of Time’s poise and pacing were utterly perfect, and that hasn’t changed at all for this iteration, despite the passage of time since release being some 12+ years (it’s not quite 13) - a testament to the timelessness of the game. If you want adventure, discovery, action, puzzle-solving, exploration and an uplifting and classic tale told in the interactive form, this time delivered in glorious stereoscopic 3D, The Legend of Zelda: Ocarina of Time is exactly what you’re looking for. More than 10 years on, it’s still worth the price of admission.
Latest Comments
Link