The laundry list of no-nos from the higher-ups at Sony -- where information from within The Last of Us Part II is concerned, in writing our definitive review -- is as extensive as the game’s Infected, Runners, Clickers, Stalkers, Bloaters and Shamblers, and their hunger for you, while being as strict as Camp Jackson’s patrol schedules, hierarchy and “please don’t leave without permission” policy.

In short, we traded a lengthy amount of time with the game in the lead up to posting this in-depth verdict, by agreeing to avoid talking about certain aspects of Ellie’s grueling new journey, deemed by said higher-ups as ‘spoiler’(ish) material. We don’t wholly agree with all the off limits stuff as being in the giveaway camp, but we respect the process because almost all of it is story and character-related.


And at its core, this is as Naughty Dog a game as you can get. So being shackled to deviceless divulgence of the game’s key drivers will be a challenge indeed, but it's one we’re willing to take given The Last of Us Part II is arguably one of the year’s biggest releases, and stands as something of a swansong for the PlayStation 4 as we sit ready to slide into the next generation.


In part due to the challenge of reviewing the game as clearly as possible without breaking the rules in place, I decided to tackle it on Survival for the ultimate The Road-like experience. In the game’s opening menu, Survivor is described as “an intense, demanding challenge”, where “resources are extremely scarce and enemies are deadly”. Tonally, it’s no spoiler that the world of The Last of Us is brutal, as was established in the first game. While we’re all used to post-apocalyptic settings, more often than not enemies like zombies or mutated beasties are what’s referred to as ‘toys’ within these spaces; grindy fodder for combat, points or resource gathering -- moving, groaning impediments, often slow and easy to dispatch, despite large numbers. Especially if we’re in open-worlds or sandboxes.

This also usually means there’s at least *some* lightheartedness sprinkled throughout, but with The Last of Us as a franchise and, in particular, Part II, there’s little-to-no-room for joviality. Make no mistake, the brake lines are well and truly cut where in-your-face violence and brutality is concerned here.

And there are certainly no ‘toys’ in sight. 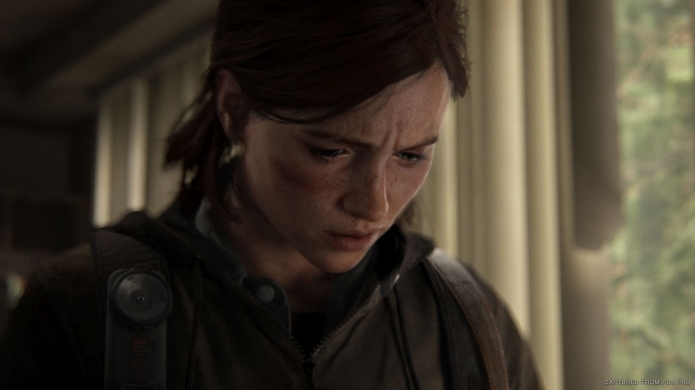 From a narrative carrot, the key theme throughout The Last of Us Part II is revenge. I even toyed with just writing this whole review in Klingon proverbs because that angle seemed warmingly fitting. Why and how you revenge is part of that Crossroads pact we mentioned in the review intro, so we can’t really go there, but what we can say is that Ellie is headstrong in her quest for emotional equalisation, and while she will have some help along the way, her drive and desire is infectious, leaving us often gasping for breath, and in dire need of a post-game ice bath. Just to manage the tension.

But it’s in the game’s narrative my first real issue with how all of this plays out rears its head. It’s a bit of a structural mess, and the broad-stroke themes don’t play so nice with the moment-to-moment dialogue. Humanising this fantastical experience comes at a detriment to the suspension of disbelief, and this is equally amplified in how the studio handles certain mechanics required to survive the game’s intense combat bottlenecks. At the narrative core is a lean on the philosophy of “know your enemy”, but how this plays out dilutes the game’s desire for the aforementioned revenge and we’re often left wondering “what just happened and why couldn’t I have just made this decision, instead of the one forced upon me?”. And unfortunately this happens a lot.


Atop the story, this heavy-handedness from Naughty Dog permeates the game’s integral inventory management system. Simple oddities like only being able to pick up one piece of cloth required to help craft, say, a medkit or molotov cocktail; equally important tools required to navigate the hardcore and smart AI populating each combat space, limits your ability to manage mobs and danger. All the while set-dressing visual items like sheets, curtains, clothes et al exist in visible non-existent reach. Within the same space. And yet can’t be used. It’s the equivalent of holding a small child who’s flailing their arms about trying to attack you, at adult arm’s length making them look small, feeble and silly. Only in this scenario Naughty Dog is the adult and you’re the child.

"Make no mistake, the brake lines are well and truly cut where in-your-face violence and brutality is concerned here...”


Moreover, upgrades and abilities are farmed out at the leisure of the studio, making it feel like the withholding nature of much-needed items wasn’t strategically designed for a mountable challenge with a satisfying outcome; “I survived Downtown Seattle’s clicker-infested bank” quickly becomes “I survived Downtown Seattle’s clicker-infested bank and all I got was this lousy t-shirt. A shirt I also *can’t* use as a component in crafting items that actually help me overcome insurmountable infected odds”. 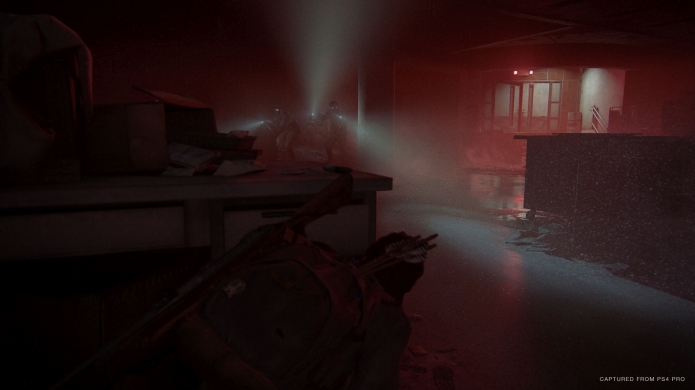 Ironically, while the above is an ongoing frustration, it’s in the game’s freeform approach to tactical stealth and enemy evasion that The Last of Us Part II seriously shines. For the most part, enemy engagement is either iterative in your conquest of the event, through both luck and pure skill, but it’s in patience that you’ll gain a friend, and the more patient you are, the bigger the elation rewards will be. Infected can’t see your flashlight, for example, so darkened spaces can still be navigated with a keen eye, but you need to be methodical and slow. Get too close and either move too quickly which causes sound, or enter a vision cone, and you’re swamped like starving geese to a loaf of mouldy bread.

And as you’d expect with this genre, the infected and mutated are just sad byproducts of the pandemic; a constant reminder of the price of your own survival. But it’s in the blade, axe, spiked club and trigger-happy hands of fully functioning humans who *chose* a side, and an action, that the game’s true monsters emerge. Killing the human baddies isn’t even remotely an issue, personally, especially when the game constantly feeds you set piece reminders of their game-world brutality. Par for the justice course, I say. It’s just that coming full circle to that all-important narrative, as lead by Naughty Dog, and its penchant for hand-holding and heavily directing the emotive fallout of your own actions, that “par for the justice course” gets caught up in manufactured emotion.


Ellie literally slaughters hundreds of enemies throughout the game, yet a handful of incidents that come packaged with an ‘important’ character-building cut-scene make it seem like she’s on a knife’s edge and is constantly jarred by her own killing actions. This, however, is at odds with the core gameplay loop where she appears to be totally cool with doing what needs to be done to trigger the next checkpoint. It’s where the gameplay and story pretend to get along, but really don’t and it simply makes for a disparate outcome that belies what should have been a more connected experience between mechanics and story.

"Get too close and either move too quickly which causes sound, or enter a vision cone, and you’re swamped like starving geese to a loaf of mouldy bread...”


The game is incredibly long. That’s a statement out of nowhere, but strap yourself in for a fairly lengthy journey. There’s no real beginning, middle and end structure here. But much of this is tied to the first rule of TLoU2 Review Club, as mentioned in our intro, so you’ll have to take our broad word for it. But in saying that, the game’s length is actually one of its strengths. Visually, this is probably pushing the PS4 to its limits, and the game’s facial animations, lip-syncing, mo-cap, action animations and more are the best in the business. It’s a structured world with cleverly-crafted walls that guide you down developer-required paths. And while there are ‘sandbox’ areas, each of these is more a hub for varying missions sending you this way and that, with starting points and end points, than open-ended "choose your own adventure" sprawls. 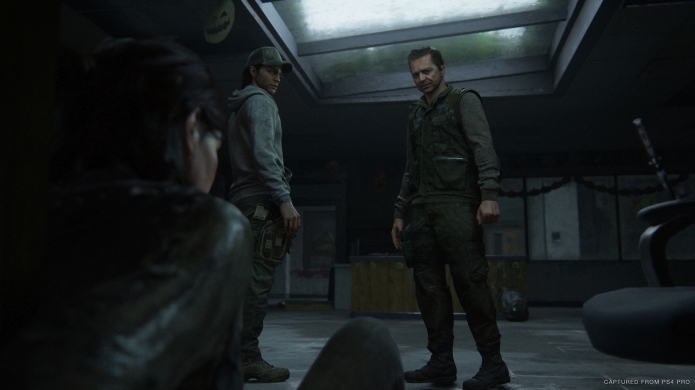 Traversal is handled on horse, on foot and even on boat at some points, while scripted weather keeps mood, tension and overall atmosphere at an all-time high, all the time. This might be a game you play how the devs want you to play, but when they’re serving up this much visual realness, it’s difficult to complain. There is an escalating scale of enemy types and delivery of those types area-to area, and this is in keeping with traditional videogame design. Additionally, some of the sandbox combat zones allow for truly lateral thinking and tactical recourse. You can often trick the enemy and find ways to avoid them, giving yourself breathing room and a chance to regroup. The Last of Us Part II is at its best in these types of moments, when you’re back is against the wall and your resources are limited. But you’re not out of ideas or ability yet, and that earlier-mentioned patience can pay off big time. As long as you use the game’s systems and opportunities to your advantage, just don’t go thinking that when it opens up once, it’ll remain open, because as soon as you think you’re off the chain, Naught Dog reels you right back in.

If we could have said more, we would have, but we’ve kept this spoiler-free and critical, while hopefully regaling the tonal sense of what you can expect when firing the game up for the first time. It’s not for the faint of heart, and takes the post-apocalyptic formula to new brutality heights, but you’ll have dreaded fun while plotting your course both through the game, and for revenge. After all, it’s a dish best served cold, and more often than not you’ll be shivering outside in the rain-drenched black of night, bruised, bloodied and battered. Staring at the last two rounds in your weapon, wishing you had a fuse for your near-completed molotov while hearing the echo-location clicks of the poor bastards swaying in the corner, the pandemic turned into living purple 1-Down mushrooms.