We sit down with Jason Ronald, Director of Program Management for Xbox Series X|S, to talk about looking back and moving forward.
Talking Backwards Compatibility and Preservation with Xbox

The Khajiit tendency to refer to themselves in the third person when talking has always been endearing, if a somewhat contrived trait born of the feline's natural state of absolute narcissism, aloofness, and inability to give two flicks of a tail for the world around them. Evolution, dark magicks, or most likely divine intervention, has bestowed a modicum of intelligence, speech, and bipedal locomotion upon these cats. As a result even their innate self obsession has been somewhat curtailed; these cats now actually care about events and others outside of themselves. Occasionally.

They do of course suffer the same penchant for unmitigated excessive verbosity inherent to all Tamriel's inhabitants. 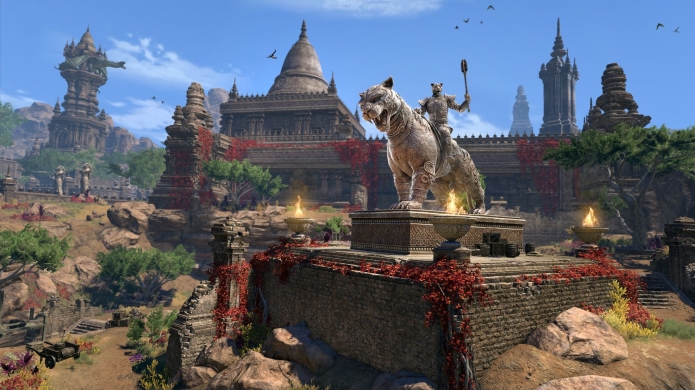 In recent years The Elder Scrolls Online has settled into a comfortable cycle of large annual expansions followed by smaller updates covering stuff like new dungeons and other additions. As seen with the likes of Morrowind and last year’s Summerset, the latest sojourn into never before seen Tamriel locales brings us to Elsweyr. Otherwise known as the home of the cat-like Khajiit. Of which there are many different breeds.

Continuing the year-long Season of the Dragon, first announced with the Wrathstone dungeon DLC, Elsweyr greatly enhances and solidifies the dragon experience by incorporating these beasts into the principal quest line and as new free-roaming world events. The dragon fights (outside of quests) are essentially world bosses, and don't add anything startling or new to The Elder Scrolls Online aside from a helpful map animation that displays where a dragon fight is occurring. A mechanic that should be added to all world boss events.

Taking the beasts down does require a large contingent of players though, so from a pure “oh wow look at the size of that thing” the dragons of Elsweyr are formidable to both fight and gaze upon. 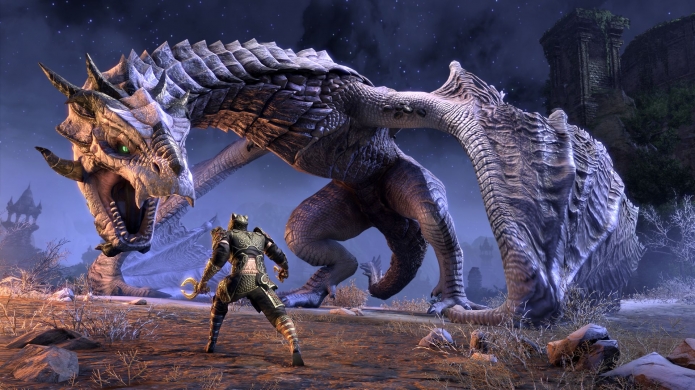 As we have come to expect from The Elder Scrolls Online expansions Elsweyr offers a bevy of side quests to complete alongside the main quest line, as well as new delves and group dungeons to explore, and a new trial to conquer. At this point the formula is beginning to show, but the sense of discovery still remains one of the game’s most alluring aspects.

"Elsweyr greatly enhances and solidifies the dragon experience by incorporating these beasts into the principal quest line and as new free-roaming world events. "


Elsweyr, native home of the Khajiit and their non-verbal relations the Senche Cats, may not be as large in area as say Vvardenfell (as seen in The Elder Scrolls Online: Morrowind), but it certainly offers a dramatic landscape of arid desert badlands to the north, and verdant jungles and woodlands to the south, separated by a vast canyon gouged from the earth running diagonally across the land. The Khajiit seat of power is to the north in the town of Rimmen, where the Usurper Queen Euraxia has, well, usurped the throne with the aid of her pet necromancer and, you guessed it, a few dragons.

And talking about necromancers and their pets made of animated bones that attack, Eslweyr introduces a new playable class - the Necromancer. Which, is a tonne of fun, versatile, and surprising too. Raising some skeletons in a town for instance, in a show of “look at me, I’ve got skeletons”, will quickly result in a large bounty. A ‘kill on sight’ one, due to necromancy seen as, well, evil across the many lands of Tamriel. The versatility of the class, that being the ability to become a damage dealer, a healer, or a tank or a combination of the above is commendable. And means that it will appeal to just about all Elder Scrolls Online players.

It’s also one of the more showy classes to be found in the game, as you can use a giant magic scythe to attack a big group - whilst restoring health with each hit - whilst you all stand in a magical makeshift graveyard of circle damage-over-time AoE goodness. Oh, and you’ll have skeletal pets joining the fight too. In fact, if we had to register one complaint - is that once you get to this stage and unlock a few different attack skills and healing spells - combat with the Necromancer class becomes a little too easy. Trivial even, and something that outside of group dungeons and world boss encounters could do with a bit more challenge. 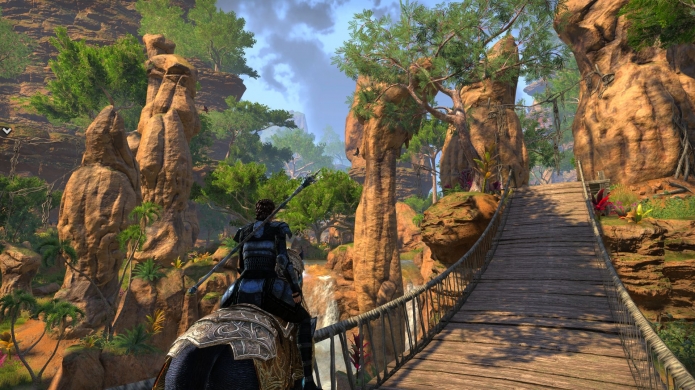 Something that is exacerbated due to the main story quest line not being particularly engaging and somewhat confused by the sheer quantity of NPCs and their doings and connection to the underlying mystery. There's the dragons (of course), the tyrannical queen and her assorted minions, her half-brother, the necromancer and his undead minions, and a whole host of cat-people desperately trying to wrest control of their land and lives back from the amassed forces of evil. And this being The Elder Scrolls, everyone you meet has something to say, and are more than willing to tell you their entire life story, ancestry, views on religion, and so forth. It all makes for a main quest that while in terms of action can be completed moderately quickly, seem to take a long long time to do so.

"The Necromancer is a tonne of fun, versatile, and surprising too. Raising some skeletons in a town for instance, in a show of “look at me, I’ve got skeletons”, will quickly result in a large bounty. A ‘kill on sight’ one."


Aside from Rimmen and a couple of smaller towns, there aren't too many populous places on the map, except for the cunningly wrought settlement called The Stiches. Less than reputable Khajiit have banded together here and, with the aid of many suspension bridges, made their homes atop a series of buttes that tower up from the floor of the giant canyon. It's impressive to see from a distance and even more so up close. As of now it’s easily one of our favourite locations in all of Tamriel. 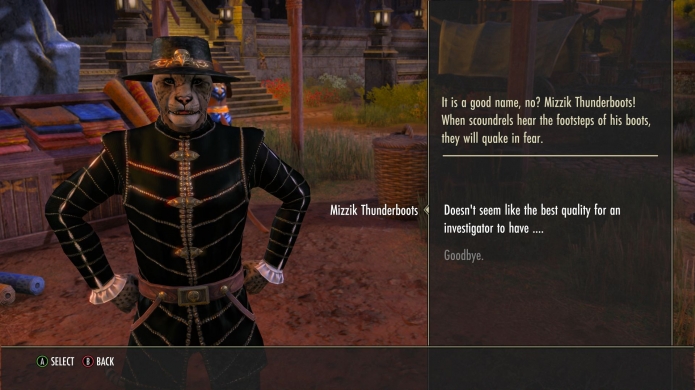 In addition to new locations like The Stitches the side quests present an entirely different story, and bring a much needed sense of humour and frivolity thanks to excellent characters. Some of whom we have met before. Alcoholic cats, skooma addicts, adept and budding necromancers, and one hilariously inept diplomat from Skyrim make for some of the most engaging and amusing quests in Elsweyr. Little mini-narratives that continue the trend where side-quests found in The Elder Scrolls Online offer evolving narratives as opposed to the sort of stuff one might expect to find in an online RPG. Things like, “Hey adventurer, my farm has lost some farm stuff so can you go and kill 26 wolves and bring me back their pelts. Because that would totes cheer me up, alongside netting you some sweet XP.”

In the end Elsweyr unfortunately errs on the side of more of the same. Even with dragons, a fun new class in the Necromancer, and some great writing found in the side quests and the strange cat-people that make up the land. The main story is mostly a let-down, until it finally kicks into gear as you storm a castle. As a whole there’s not much surprise to be found, and in terms of what makes up a new place to explore in The Elder Scrolls Online it’s mostly cat and paste.
Follow Us
Latest Reviews
More...
News Feed
Advertisement
Latest Threads
Log In
Create Account | Lost your password?