The Darkness holds a special place in my dark gaming heart. When it was released in 2007, I was an impoverished university student, with a raging game addiction that was difficult to feed on a limited budget. With so many games being released and so little budget to buy them all, I had to be selective. And, believe me, as a devout PC gamer, I felt a lot like the protagonist of The Darkness, Jackie Estacado: of two minds about the best way forward.

Was I to gamble precious gaming funds on a console-only first-person shooter—a genre that is hard to get right on a console, particularly when pitted against the accuracy of a mouse—or did I go with my gut and fork out for a game that had the promise of gunplay, duality and, most enticing of all, a compelling story filled with believable characters? I rolled the dice, took the risk and am glad I did. The Darkness was an incredible game, despite its flaws.

Fast-forward to more recent times and things get a little trickier. Those who finished the original game will know that the storyline wrapped up rather nicely. Also, Starbreeze Studios, those same guys behind the upcoming RC game, Syndicate, had earned a big chunk of gaming street cred from me with The Darkness and The Chronicles of Riddick games; but they were no longer involved in the series. Obviously, as a fan of the first game, there was hope for a sequel, and the expectation of continued awesomeness upon its announcement, but that hope was curbed with a healthy dose of caution. 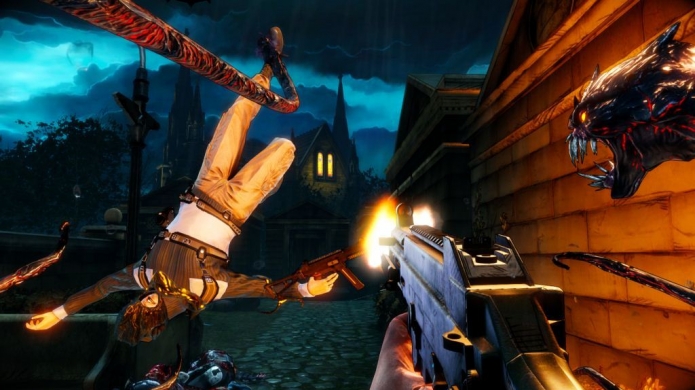 Out of the box, the game looks beautiful: not in a Battlefield ‘that almost looks real’ 3 kind of way, but in a gloriously cel-shaded visual palette that looks like pages ripped from a comic book and thrown into a 3D blender. Being based on a comic series, this is, of course, a very logical way to present the material, and it works a treat. Only the odd texture rendering fail and the somewhat limp character hands mar the perpetually shadowy yet somehow vibrant world from visual perfection.

It also had the added bonus of allowing Digital Extremes to justify a whole lot more gory content on the basis of the Classification Board’s favourite word: context (specifically, horror violence). Before the credits roll, you can expect to rip enemies asunder, decapitate them, violate their throats with flesh-hungry demon arms and pull their spinal columns out through their arses - seriously. The game has still been edited for Australian release, though, with the Classification Board website stating that a late-entry sex scene failed to make the cut.

Despite my aforementioned hopeful reservations, I was pleasantly surprised with how well the all-important characterisation was handled, and how The Darkness II proved itself to be not just a worthy (but in many ways necessary) sequel in terms of the narrative. For those unaware, both games tell the story of Jackie Estacado, a young hitman with a tragic upbringing who, on his 21st birthday, manifests a family curse - a powerful demonic force known as The Darkness that feeds on darkness and suffering, but is hurt by the light. 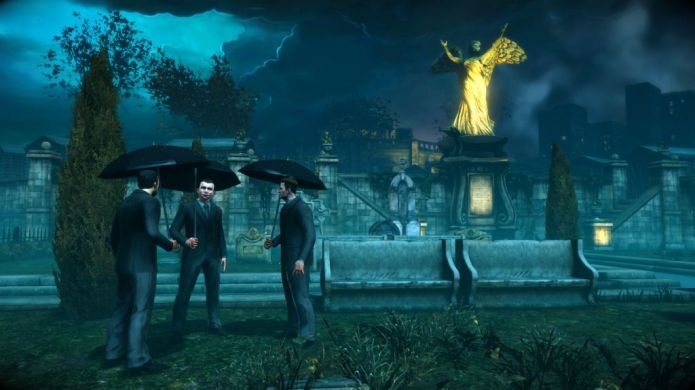 In the original game, Estacado was driven by revenge over the [SPOILERS] brutal murder of his girlfriend, Jenny [END SPOILERS]. With The Darkness II, Digital Extremes have used Jackie’s girlfriend Jenny as a motivating force again but, thankfully, not in a carbon-copy form of the previous game. Instead, she provides ample reason for Jackie to welcome the release of The Darkness that he has tried so hard to control since the events of the first game, and her appearances in the storyline messes with Jackie’s head in a very good way.

Jackie’s between-mission dark-room musings make a return, but don’t have the same impact as the original game. Outside of this, the storyline is tight and handled with great respect to the original game, even if the ending smacks you over the head with how much they want to make The Darkness III.

What hasn’t been handled with great respect, though, are some of the gameplay elements from the first game that feel like strange omissions. There’s only one Darkling this time around—as opposed to the multiple Darklings that could be manually summoned in the original game—and you really only have the option to toss him at enemies in combat. There is the rare section where you take control of him, but this has been added at the expense of the ‘creeping dark’ ability that let you take control of one of The Darkness arms through certain sections (a glaring omission I think – Steve).

To be fair, the single Darkling has been treated like a proper character and tied into the narrative. That being said, it felt more logical for me to be able to have limited control over The Darkness in the original game because of how the idea of control played into the power play between Jackie and the powerful demonic force that possesses him. I guess Digital Extremes could easily argue the opposite, though. 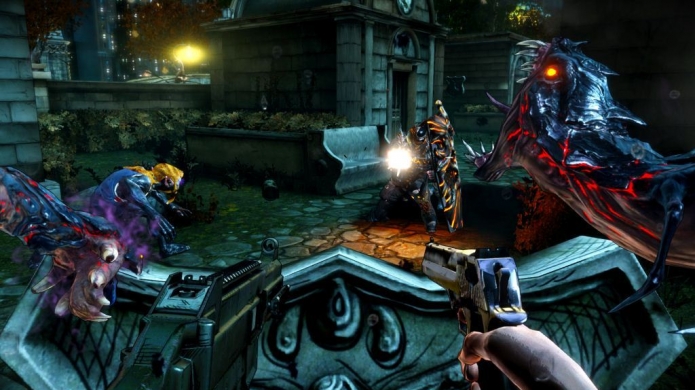 There are other little gameplay sacrifices, too, such as the ability to throw cars at enemies: a particular favourite party trick of mine in the last game. But the trade-off is totally acceptable, considering how cool the quad-wielding concept is. The left and right mouse buttons take care of your standard dual-wielding fare, while two other buttons can be assigned to control Jackie’s demon arms: one for grabbing and the other for slashing.

This is great in theory, and a hell of a lot of fun once you get your head and fingers around it, but it also demonstrates how the game feels ported; at the very least, in respect to the default control setup. The middle mouse button controls the slashing demon arm, and you have to move the mouse to swing the arm in a particular direction. This works really well by itself, but when you want to shoot twin guns and throw a demon arm into the mix, it’s a clunky affair of having to hold three mouse buttons simultaneously. Worse still, even if you rebind the button to something more practical, you’ll have to sacrifice weapon accuracy to swing the arm with a mouse movement.

Quad-wielding is a great idea, but I wish Digital Extremes had cracked a better control system so that it could actually be a practical system, too. In reality, you’ll only be able to use one demon arm at a time or shoot two weapons; it makes the promise of quad-wielding somewhat misleading.

The default control illogic carries over into other functions, too. If you get lost, you have to press backspace to mark your objective, which means taking one hand off the mouse or moving the other across the keyboard (if you’re a WSAD player). To converse with NPCs or perform executions, you have to use the top-row numbers, which is an odd choice. In the case of the executions, considering you can’t do anything else while they’re unfolding, it could have easily have been assigned to any number of buttons already dedicated to other functions that cannot be performed during an execution. 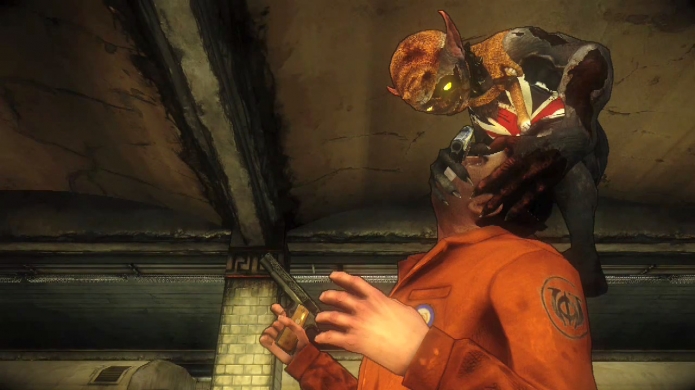 On the topic of executions, although incredibly awesome, they do make you temporarily invincible while they’re taking place. Sure, it would suck to get killed while brutally quartering someone, but an easy workaround would’ve been to let the player keep moving while the execution takes place. This way, it would’ve been more of a tactical decision to perform a finishing move. What happened instead was that I ended up performing them whenever possible because of the incentive of increased kill XP.

Yup, The Darkness II has an XP system that ties into a basic four-branch skill tree roughly separated into weapons, combat powers, passive abilities and executions. Because you can garner so much XP from going overkill on the executions, you can unlock most (if not all) of the skills before the end of the game, but they do add an extra tactical level to the combat, which is particularly frantic when at its peak. You will feel a tad overpowered from about halfway into the game; and I was playing on the second hardest difficulty.

Also, the enemy AI is pretty useless, with occasional moments of cool—such as an enemy going prone and rolling in and out of cover to take shots at me—and, ultimately, enemy AI became irrelevant towards the end of the game when you’re packing more powers than Sylar.

There’s no competitive multiplayer this time around—which isn’t a negative because the chances are good that you’re probably still happy with Battlefield 3 or Call of Duty—and a co-op mode has been thrown in to make up for a rather short and linear campaign (I finished it in around 6.5 hours). The co-op fills in some backstory from the single-player campaign, and you can jump into the boots of one of four magic-infused lackeys: Inugami, Shoshanna, Jimmy Wilson and J.P. DuMond. 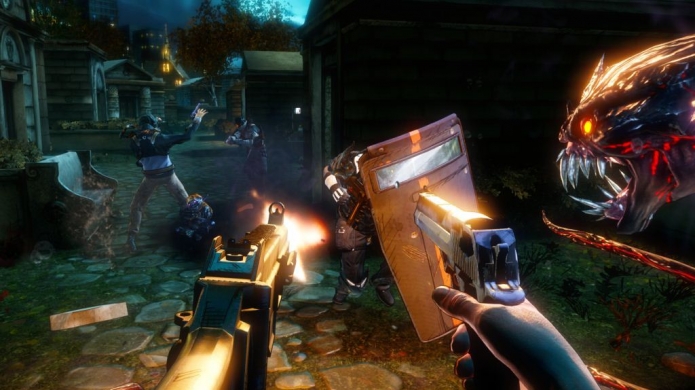 Each has their own unique abilities and they complement each other well in combat, which helps to make up for the fact that they’re strangely cliché characters: a rare narrative oversight for the series. That being said, you will get a few laughs out of them, even if the co-op missions err on the shorter side of things.

It’s a smaller package than the original Darkness and it does have a few black marks, but that doesn’t stop The Darkness II from showing that there’s plenty of life in this franchise. Digital Extremes has backed itself to give a different take on the source material, yet held true to the core of what made the original game such a memorable experience. Sink your teeth into it.