There’s an oddity once you’ve played a few hours of The Artful Escape, which is absolutely filled with the sort of wailing you imagine Dave Gilmour just does while he’s washing the dishes. Like, it’s an endless stream of stunningly delivered guitar riffs and licks, played to a trip-induced backdrop lifted from the Chromium Age of psychedelic, progressive guitar minstrelism and nebulae-inspired light and laser shows. This is a moving postcard to the 70s and 80s as far as influence goes -- as if David Bowie, Pink Floyd and Genesis found each other on a moving platform designed by Terry Gilliam rapidly coasting through the far reaches of space, powered entirely by solar sails and positive thought, and decided to jam.

That oddity? When you come back to the game if you’ve turned it off, its title screen reminds you this is a folk tale first, with a pretty darn good folk song greeting you each time you fire it up. The two musical worlds represented here couldn’t be further apart; small town unintentional post-hipster vibes strumming on the one hand, neon-laden journey through the cosmos finger-tapping on the other. And there really isn’t an in between. 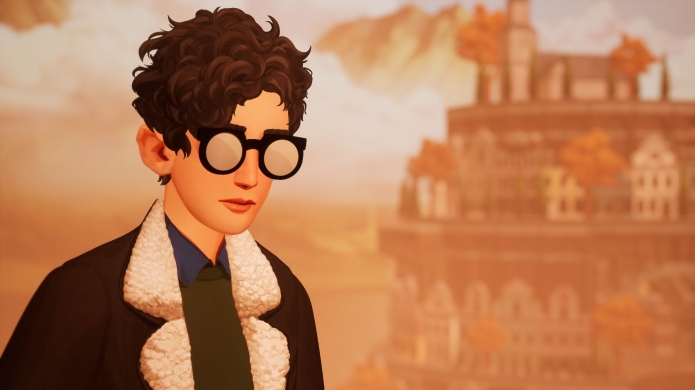 From the outset, The Artful Escape by Aussie studio, Beethoven & Dinosaur, feels like it’s punching above its weight. Names like Lena Headey, Jason Schwartzman, Mark Strong and Carl Weathers apply serious gravity to a promptly gorgeous affair. It’s as indie and folksy as you’d expect something with Schwartzman’s name attached to it to be, but there’s also an undercurrent of more. A whisper on the wind that pulls you along with an assurance of adventure and escape. And it honestly doesn’t take the game long to deliver on that hinted at promise.

"It must be said The Artful Escape is more story and journey than it is game...”


Actually, it’s maybe best to start at the noun “game”. Because it will be largely debated just *how much* videogame is actually here. You do control the game’s main character, Francis Vendetti, and you do interact with the world, albeit in limited fashion. I went back to a handful of other side-scrolling adventure outings like Stela, Raji: An Ancient Epic, Unravel and Inside, to name a few, to compare the experience, and it must be said The Artful Escape is more story and journey than it is game. At least in the traditional sense. But there is agency -- how you present your version of Francis through dialogue, the look you build for your version of them, how you choose to utilise the game’s limited movement options through the environment to look as stylish as you can... it all requires decision making and interaction.

There’s no hard fail scenarios; no quick time events. No combat or extra lives. Just you, a guitar and the cosmos at your feet. Oh yeah, sorry. I forgot to mention the cosmos.

So in getting to matters quickly, as the game does, the folk stuff gets left back in your home town of Calypso and you find yourself jutting about in space and time; shredding your axe between worlds along paths of pure light, alien terra firma and even aboard a spaceship. Inside that ship is a live-in fanbase to the almighty Lightman (Carl Weathers) -- a human who came before you, played and left the known universe on its knees, begging for more. You’re here as the next great prodigy in line, though you don’t really know this yet. Instead, it’s left to you and your teenage devices to take an enthusiastic and not-at-all-concerned step through the cosmic door, where upon you’ll just stylishly shred as you almost skate, or slide, your way along a prism pathway. Nebulae and trippy art fill the periphery as your wailing permeates the space, like it were an atmosphere all its own, resonating sonic emotion.

"I had to internalise a stop on using the screen capture button on my Xbox Series X controller due to over-spamming...”

There isn’t a great deal of replayability baked into this journey. The Artful Escape is definitely designed as an experience to be had in one big motion. Naturally you can go back in and play again, but what continually makes the game great is how floored you are by its art and presentation. It’s almost too difficult to put in words, but if I had to offer a visual selling point: I had to internalise a stop on using the screen capture button on my Xbox Series X controller due to over-spamming. Every single frame in the game is a cosmic postcard, and you’re all the better for having visited every single nook and cranny of the linear path off to your forever right. It’s in this delivery the game constantly amazes and the whole experience is just jaw-dropping. So much so that, while forever stunning, its initial impact is definitely lessened upon reentry for a lost or missed Achievement or the like. 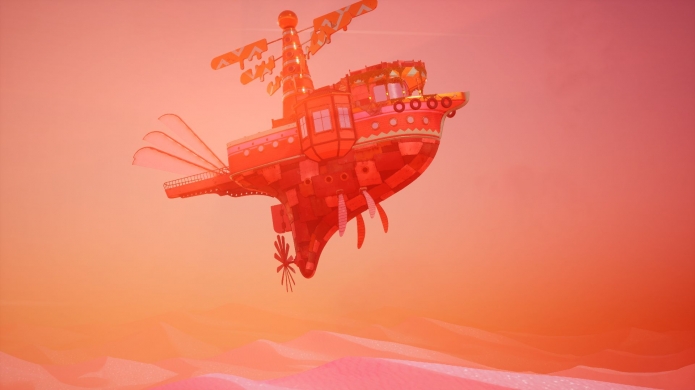 "A love of incredible guitar and soloing is definitely recommended, but there’s also a pretty cool story about self-discovery...”


You will play music in the game, but it’s not the same as in a title like, say, Brutal Legend. There’s simplicity for days throughout The Artful Escape, and in this sense the game is accessible to anyone. A love of incredible guitar and soloing is definitely recommended, but there’s also a pretty cool story about self-discovery, living in the shadows of your elders, living up to expectations and just releasing yourself inside your own thoughts for pure escapism here. And there’s intriguing conflict amidst the game’s handful of players, while the entire experience is sublimely written, and perfectly delivered as far as performances go.

Pink Floyd is definitely The Artful Escape’s biggest influence, even if Beethoven & Dinosaur say otherwise. And it’s full of music industry in-jokes. Like the contract you peruse from afar, sped up, and neatly taken from your sight before you can blink, though the key term “posthumous” as highlighted by Lightman, does stand out, and seem poignant in a real-world sense. And even pop-culture nods permeate the many levels on offer (pretty sure there’s a Slurms McKenzie joke in there). 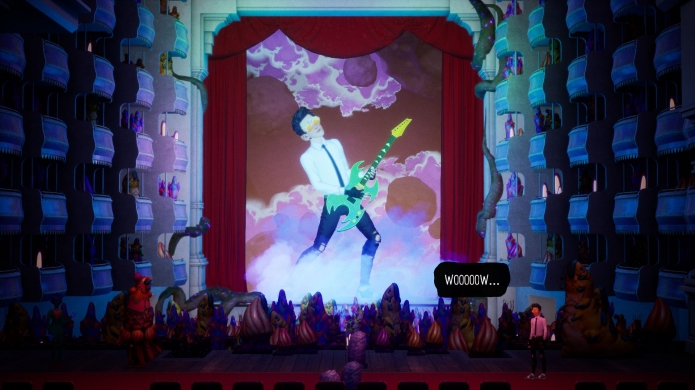 On the whole, the best way to sum up The Artful Escape would be “transcendent”. It is a videogame, but it’s also a dynamic soundtrack, or album. But it’s also an interactive film clip from the 70s, or as if an album cover came alive and kept going beyond the edges we can see. But it’s also an irreverent comedy with impeccable performances that ground the experience, even if that experience is in performing virtuoso jamming sessions with Lovecraft-level beings of unimaginable design. But it’s also a serious coming of age story that tackles some very real issues around expectations and feeling trapped and not knowing who, or what, you are....

The Artful Escape is one of the best products to have emerged from Australian game development, maybe ever. If not for its storytelling vision, which is 80% visual, then for the bold decision to push the player through that cosmic door, whether they liked it or not, and onto a journey that might not even seem at all like a videogame, but entirely couldn't happen, if it wasn't. A highly recommended experience.