To those already in love with, and enthusiasts of, the Ferrari name, Slightly Mad’s Test Drive: Ferrari Racing Legends delivers a massive serving of legacy racing. From the cars unlocked through testing, time trials and races over the sixty four year span covered, to the vast racetracks visited along the historical journey, accompanied by something of a storyline to guide you through.

This game speaks directly to those enthusiasts and gives them exactly what, I imagine, they’re after. A chance to relive the company’s releases and historical progression through a campaign set over three different eras from 1947 up to 2011.

The Golden Era starting in 1947 through to 1973 was the most engaging, perhaps due to the classic car models you have access to. Not saying the moderns ones aren’t spectacular, there’s just a sense of warm nostalgia stirred up when you’re dropped into the classic surroundings driving one of these machines in full car view mode. 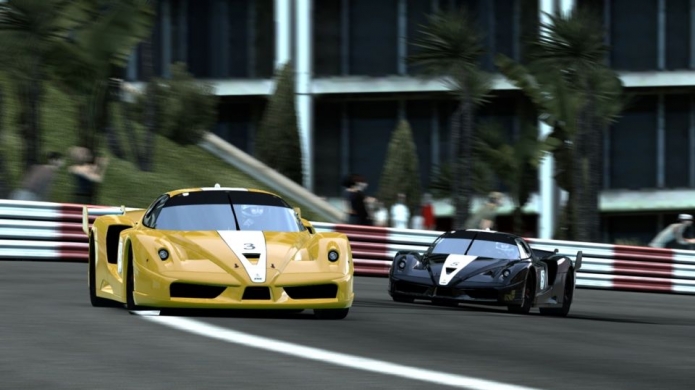 With single-player campaign, quick race, online multiplayer (with up to eight players) and phantom time-trial modes, there’s a bit to chose from. Unfortunately you only have access to cars you have unlocked in the campaign, forcing you along those lines if you really want to play any of the cars featured beyond the first challenge of each era, a feat that sounds a lot easier than it actually is. Phantom time-trials lets you set record lap times and better these by racing your previous phantom times, it doesn’t really appear to offer much more than that though. I wasn’t able to access any online multiplayer matches unfortunately, most likely an indication of the number of players taking this game online.

Driving lines showing corner preparation on track position as well as a colour coded -- green, amber, red -- speed indicator offered a good introduction to the nuances of driving requirements for each track and help to develop familiarity over controls. Removing them proved only bearable until the difficulty level spiked, and even then the driving line indicators and warning couldn’t always help me.

These difficulty spikes were inconsistent and after a while almost seemed to say, “If you can’t keep up, probably better you don’t play.” That is until, eventually through strong persistence, I was able to not only keep up, but dominate the lead, in which case the spike seemed to just drop away completely, until the next huge one a few challenges down. This seemingly inconsistent experience could be inline with Enzo Ferrari’s requirements of a driver or an attempt by Slightly Mad to create some kind of boss battle feeling. Either way, as a racing game, repetitive by nature anyway, it did become frustrating.

Four driving view options give some diversity and fun when wanting a different visual experience depending on the car you’re driving. HUD’s are also relative to each car and there are viewing options for speed/petrol, navigation with or without rear view mirrors or no HUD at all for a full screen non-intrusive experience. 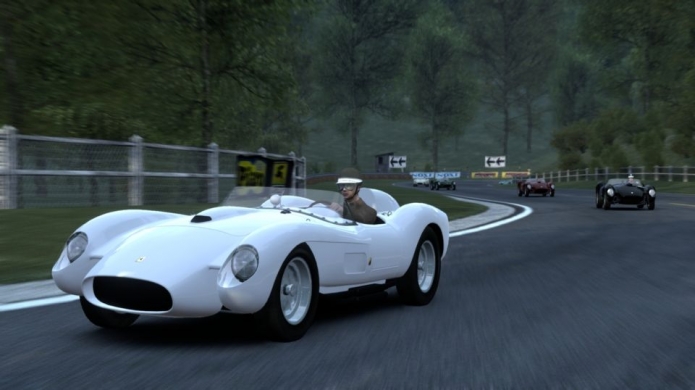 Another frustrating feature and dampener on progression and control freedom was the automatic driving aids that kicked in. The most noticeable was the auto brakes that engage when you’re coming into a corner. It put a fairly big restriction on how aggressive you could be once you mastered the timing of manual brakes and acceleration on the corners. I was able to turn some of them off when switching from automatic transmission to manual, but doing this only added to the enormous difficulty spike by having to control the gear shifts as well, so I was forced to switch back to auto. More customisation here would have been welcome, but let’s face it, only car fanatics or Ferrari aficionados are likely to pick this up anyway.

And that brought me to ask myself through the campaign “what about those of us not so familiar with the Ferrari evolution?” It feels like a big opportunity has been missed by not having a more in-depth, interactive storyline in the campaign to accompany all the driving time put in. I found myself wondering more about the development of all the vehicle designs and engineering and getting deeper into the evolution of Ferrari and racing on the whole. But alas, Wikipedia will have to do.

A great game for Ferrari and racing fans alike, with enough challenge to really test those familiar with the genre, but unfortunately lacking in a more approachable set-up, even for those of us who found the history of Ferrari utterly alluring even after just a few hours of play.
Latest Comments
No comments currently exist. Be the first to comment!
Commenting has been locked for this item.
Follow Us
Latest Reviews
More...
News Feed
Advertisement
Latest Threads
Log In
Create Account | Lost your password?