The defining characteristic of the Mario games has, in recent times, become their willingness to bring exciting new ideas into a level, push them, and then immediately abandon them in favour of something new. The best recent Mario games have been the ones in which every level seems to be auditioning for the chance to be turned into a separate game of its own. The Galaxy games nailed this – they were inventive, challenging, exciting and vast, worthy of their grand names. They were Mario at his peak, and consequently some of the best games ever made.

3D World’s ambitions veer off in a different direction. This is very much a sequel to the similarly named 2011 3DS game, only longer and in glorious high definition. In each self-contained level you want to find the three hidden stars and reach the flagpole, just like the old NES games. Mario has been trading on nostalgia for a long time now, and for many players hitting that flagpole at the level’s end is still going to be an enormous thrill. At the same time, hitting the top of the flagpole and seeing the attached point boom is emblematic of some of the game’s staler elements.

Even though 3D World taps into the same manic energy and inventiveness I mentioned earlier, it feels less new than most of the plumber’s outings. There are some very cool new elements – the much-vaunted cat suit that lets you climb up walls is a solid addition, and every now and then a level will offer up an idea or a set-piece so cool that you can’t help but smile. The game has been designed with four players in mind, and while it’s still probably best played alone, the chaos of having multiple players at once actually works here. It helps too that the various characters actually play differently – Luigi and Peach, in particular, are floaty and fun.

The levels themselves are generally excellent. While the game takes a while to truly ramp up, there are gems throughout the entire experience (there’s a Mario Kart themed level in World 3 that blew my mind). Quite a few levels will feel a bit familiar if you’re a series veteran though, and there’s a sense that they were designed with the 3DS in mind too – it’s surprisingly hard in some instances to gain a proper perspective on your place within the world, which led to quite a few aggravating falls off of levels. Many levels end before you feel like you’ve properly come to grips with what they’re trying to achieve, and as much as we all enjoy the classics it would be nice to see Nintendo playing with these familiar lava/ice/water/sand dynamics a bit more than they are now.

While the levels are packed with hidden content, a lot of it feels superfluous – I’m starting to wonder why, exactly, I need to keep collecting 100 coins for extra lives. Why do these games still have lives? What purpose are they actually serving? Worse still: in a game with such a heavy focus on exploration, why on earth do the levels still have timers? It makes sense when a level explicitly demands a speed-run, but there’s a general sense that you’re not allowed to be too methodical. Hunting through levels often requires certain power suits, but since getting hit means losing whatever powers you have, level-design occasionally feels a bit stymied – there’s a sense that levels where certain powers were maintained throughout would have led to more consistent design. 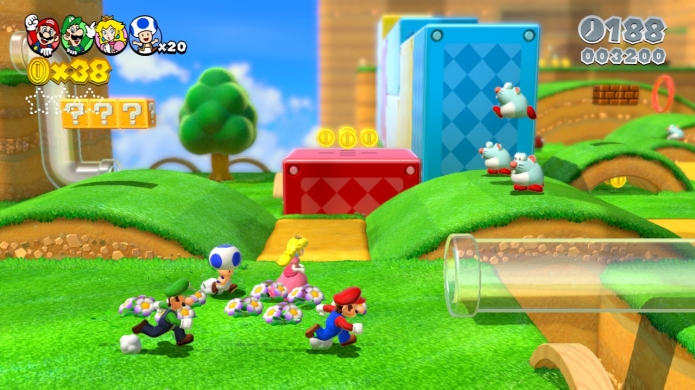 If Super Mario 3D World proves one thing that I’ve long suspected, it’s that it’s more or less impossible to make a bad game with the core Mario fundamentals in place. The only genuinely lousy bits of this game are the boss fights, which often feel sluggish and pointless, too focused on the nostalgia of bringing back old enemies and not committed to actually proving enjoyable combat experiences for the player. But even with its missteps, Super Mario 3D World is still an extremely good game, in the same way that almost every Mario platformer is extremely good.

It's in the sentiment above that it's easy to understand that Super Mario 3D World's biggest hurdle is franchise heritage. The game is at odds with itself for not being as inventive as it should be, but being so good because of all invention that's come before it. Mario, in this sense, is his own worst enemy.