I can't imagine how my fifteen-year-old self would have greeted the promise of Street Fighter X Tekken. Back in the days when fighting games were my religion and Tekken 3 and Street Fighter Alpha 3 were my daily prayers, the logistics of how Namco's quasi-3D brand of pugilism was to meld with Capcom's projectile flinging madness would have tormented me until its eventual release. Thankfully, I only had to know of its existence for two years before I could experience dream match-ups like King versus Zangief, or Rolento versus anyone with a pulse.

For the most part, Street Fighter X Tekken handles just like a beautiful, unrestrained dream. The visuals smack of colour and are styled in a fashion similar to Street Fighter IV. The action is scored with emphatic riffs and hyper-kinetic beats that match the intensity of the on-screen action. There's also a bevy of move lists and mechanics to master. Not so many as to make it inaccessible to genre veterans, but enough that you'll want to access the tutorial system before you encounter live opposition. 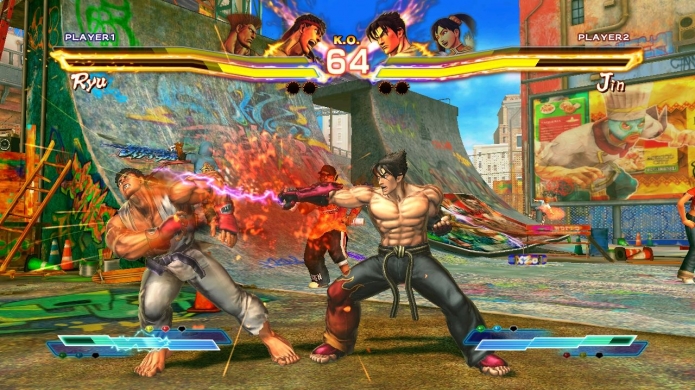 The greatest strength of this package is its roster, which offers the best of both worlds. There are few notable omissions (Blanka, anyone?), and those that made the initial cut offer a satisfying mix of old and new. While the Xbox 360 version lacks five characters exclusive to the PlayStation 3 and Vita versions, they are ostensibly joke characters that don't add a whole lot to the package. The fighting system may employ more of the quarter and half circle maneuvers that are synonymous with the Street Fighter brand, however, feel assured that the Tekken characters can hold their own in a solely two dimensional playing field. The first to fall tag mechanics (similar to Tekken Tag Tournament) allow for encounters where speed is critical and momentum swings often.

Street Fighter X Tekken is best enjoyed like the fighters of old: with company in tow or on your lonesome. The story mode can be enjoyed solo and also supports cooperative play. There's a comprehensive training suite -- with Trials that allow you to master each character's move-set and a Mission mode that tasks you with winning under certain conditions -- that's a step in the right direction, albeit far from able to teach newcomers effectively. Most importantly, the versus mode allows you to smite family and friends and bask in their collective shame. The controls also seem to hold up better in local play; maybe I'm a bit rusty, but I swear the block button wasn't working when I fought online.

You'll need to have a firm grasp of gems, launchers, the do-or-die Pandora system and the plethora of fundamentals in order to be competitive in the online arena. Xbox Live bouts seemed to run fluidly enough, but the inadequacy of the Xbox 360 controller for fighting games is brought to bear under the strain of inconsistent netcode and human opposition. To make matters worse, online bouts are plagued by a glitch that has the audio completely out of sync with the action on screen. It's not unplayable, but it's unfortunate that the online offering isn't as satisfying as offline play.

Ultimately, the marks against this joyous union are few and -- in most cases -- have the potential to be remedied. Street Fighter X Tekken manages what I had previously thought unthinkable: merging the personalities, rosters and history of two stalwart franchises into one enjoyable package. If you have love for either brand of fisticuffs and you've got some friends to fight within close proximity, I can't recommend this highly enough.