Like vampires, monsters, goblins, and other creepy fictional things that are hell-bent on messing with humanity, zombies are often the go-to undead nasty that can serve as the grey-matter obsessed foundation for interesting and engaging interactive experiences. Whether that be the unscripted but tightly structured chaos of Valve’s Left 4 Dead, the colourful and often cute gardening horror of Plants Vs. Zombies, or the original survival horror masterpiece that is Resident Evil.

State of Decay 2 from Undead Labs and Microsoft Game Studios is a sequel to the 2013 original that takes a different route, where action and survival includes scavenging a small town and its various buildings and locations for supplies. And then hopefully, finding the right site to build a sustainable community that will outlast the zombie apocalypse. A journey that includes recruiting new members with various desirable skills like gardening and an understanding of chemistry, sourcing food, fuel, medicine, and other necessary supplies, and embarking on dangerous missions to clear out infestations and hellish pulsating fleshy ‘Plague Hearts’.

That, and one day building a Still that in addition to creating home-made moonshine can also convert food into a viable fuel source. Bringing Homer Simpson’s dream of a one-for-you and one-for-me petrol station one step closer to reality. This simulation, or community, aspect is where State of Decay 2 shines brightest, serving as the foundation for interesting and often well executed mechanics that sell the concept of survival, desperation, and a dangerous world filled with the unknown.

Taking the day-night system as an example, State of Decay 2 goes a different route than most titles – even in the survival genre – with nights that last for quite a while. And thanks to a small town devoid of power, are blanketed in darkness save for the odd bit of moonlight peering through the clouds. In execution this makes the sight of a rising sun feel like the warm glow of hope that it should. And by that same token, the creeping dark and almost pitch-black town saturated in the moans and wails of the undead - a truly creepy and scary place to venture out into. 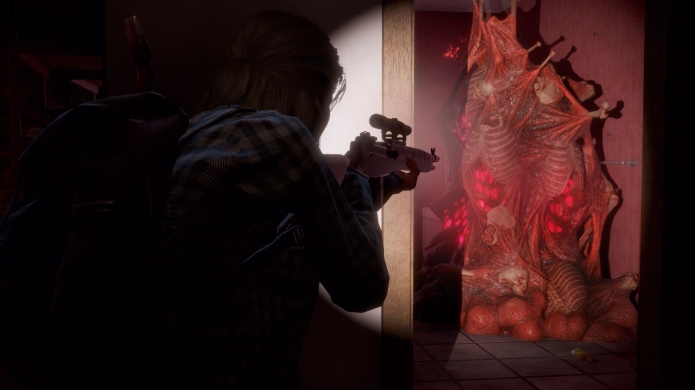 With survivors and members of your community only being able to carry limited amounts of weapons, consumables, and scavenged items, whilst also battling fatigue and injury, there’s a sense that you need to keep going in State of Decay 2. Whether that’s venturing out in the middle of the night to find sorely needed medicine or food or visiting a nearby enclave of survivors in the afternoon to trade luxury items like an original Xbox console or hand sanitizer for influence. A metric and currency in State of Decay 2 that dictates what sites you can setup your community in, as well as what Outposts you can claim for resources or off-site bases. Where naturally, taking over a water tower or power sub-station costs a lot of influence.

Although it doesn’t hold your hand or really provide much in the way of a tutorial outside of basic movement and combat, once you come to terms with the flow of State of Decay 2 it becomes a hard thing to walk away from. This isn’t to say that the game desperately needs a better tutorial system, because outside of some clunky design that it would have been nice to have detailed, being able to find vehicles out in the world and then realise you can fill up their trunks with supplies for extra storage is the sort of trial-and-error experimentation that works exceptionally well. Where survival and an open-world to explore serve as fertile ground for finding out what you can or can’t do. The moment you first come across a power station and dream of one day turning lights on is one to savour. As is the shock of a survivor, or group of survivors, turning hostile. 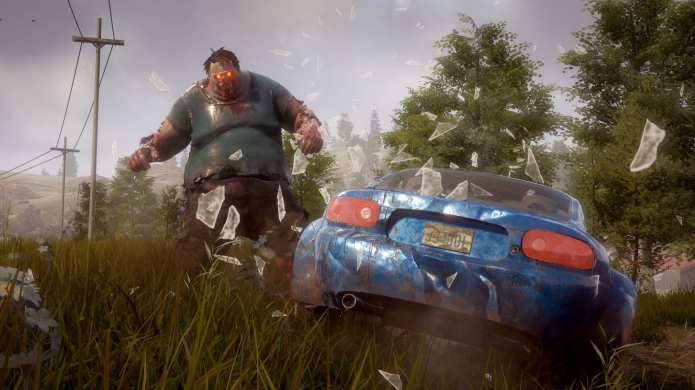 On the flipside to the harshness that comes with simply trying to grow food and scavenge for pain killers, there’s a sense of fun and experimentation that comes with expanding your community into the field of manufacturing. From creating your own explosives to upgrading cars into armoured Mad Max-like vehicles of death, the choices are both varied and desirable - serving as incentives to keep playing. And as you can only really build a handful of structures and direct your community’s focus into certain areas, this variety adds a layer of replay-ability where maybe next time you’ll build sniper towers and equip each member of your community with silenced high-powered rifles. In a post-apocalyptic militia sort of way.

Also, a special shout-out to the ability to open and close car doors whilst driving around and discovering that you can line-up high-speed zombie car door splats. Which never, ever, gets old.

The limited carry capacity of each survivor and vehicles that serve as mobile storage lockers means having a fuelled-up car or van on the ready soon becomes a staple in any expedition out into the zombie-filled world. Especially if you plan on venturing more than a few blocks from your home base. Although initially vast in perceived size and scope, once you begin to cruise around in a vehicle (drawing unwanted zombie, but welcome car door fodder, attention) the size of State of Decay 2’s three playable zones or districts never ventures into the realm of overwhelmingly huge. And that is because at its core, the experience is finite and structured around finding and taking out Plague Hearts whilst completing various random and scripted quests tied to the personality type of your community’s leader and other survivors you meet. 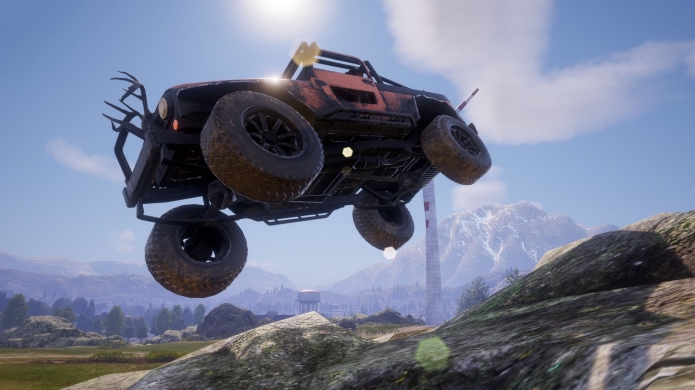 Which brings us to the main issue with State of Decay 2, separate to the many technical problems that plague both the Xbox One and PC version, and that is – it’s too easy. While engaging in combat it takes a lot for your survivor to die, so the permadeath element that results in a community that should change and evolve over time as people tragically lose their lives and new members are recruited - only really happens early on. Played cautiously, losing community members will only happen due to carelessness or being ill-prepared. The shock that comes with seeing one of your friends being torn in half by a Juggernaut (see: Left 4 Dead heavy) paves the way to learning what not to do and a feeling of going through the motions.

There should be a sense of danger in the latter stages of the game that simply isn’t there, especially when the menace of Plague Hearts (these pulsating dens of blood-plague zombies and giant hearts causing nearby zombie infestations) are supposed to get stronger the more you deal with them. Instead once you realise that a few fuel bombs and a distraction in the form of firecrackers or a boom box blaring techno make most of these encounters trivial, State of Decay 2 shifts to become a fun if limited survival community simulator. The abundance of consumables and ammunition and weapons you find often feels too generous. Even if the latter of which makes total sense for the rural America setting. 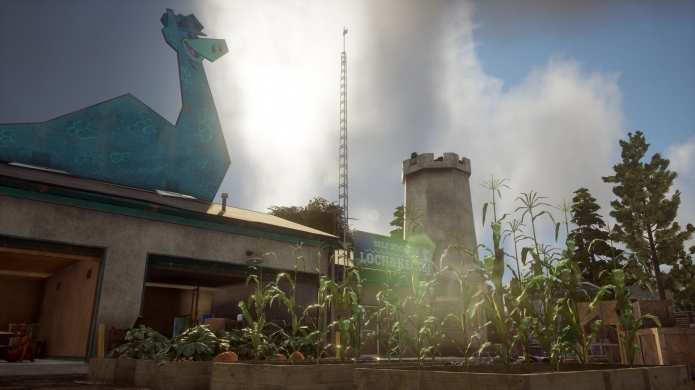 Base expansion is detailed but lacks player-freedom to express creativity in creating defences or setting up a community. These limitations are tied to the finite nature of the campaign, where even though we happily moved onto the next location to start again (with added bonuses), feels brief for a title that focuses on simulation, survival, and combat. Also, the various traits of each survivor lack the impact that they should. A gardener with poor combat skills and asthma should never be taken out into the field. Instead, swapping characters based on fatigue, injury, or infection, is less about stats than it is making sure they’ve got a few bottles of pain killers, a gun, and a decent bladed weapon before heading out.

The most disappointing thing about State of Decay 2 isn’t that it’s too easy or limited in the base building sense, but with the many performance issues, bugs, and technical problems that plague the release far worse than any Plague Heart could ever hope to achieve. In its current state, State of Decay 2 is best played and only recommended for PC - where the uncapped frame-rate means a smooth experience on a high-end rig. On the Xbox One X, even though the HDR implementation is often impressive, the jerkiness, stuttering, and janky animation all add-up to an experience that needed several more months of fine-tuning.

Regardless if you play on PC or Xbox One, zombies will fall from the sky, doors will look open but they'll actually be closed, and both UI elements and basic supply drop functionality will disappear completely in co-op.

And if you decide to play State of Decay 2 in co-op, where you can join a friend’s community to help while earning influence and keeping any items you come across, the more people you add to a session the worse the performance gets. Atrocious net code leads to a frame-rate that tanks even for the host, where going back to your base after an expedition out into world is a guaranteed stutter-fest. Which happens even with the PC version. This is disappointing in the sense that for a Microsoft published title, enhanced for the Xbox One X no less, State of Decay 2 should look great and run smooth. It doesn’t.

Clearly, the ambition of Undead Labs far exceeds the studio’s technical abilities. At its core State of Decay 2 is a fun zombie survival experience that works well when played alone or joining up with a friend or two. So much so that it’s possible to look past all the animation issues, weird clipping and bugs and quirks that mean you need to be in one exact spot to refill a car’s gas-tank. There’s something about it that keeps you coming back, whether that’s the fun exploration or simply going on a quest to clear a few houses of infestations and then loot all the cupboards and drawers for goodies. But above all that it does nail the combat side, where headshots feel great as does getting up close with a machete. Gruesome and fun zombie-apocalypse survival, but also bug-ridden and poorly optimised.
Latest Comments
No comments currently exist. Be the first to comment!
Commenting has been locked for this item.
Follow Us
Latest Reviews
More...
News Feed
Advertisement
Latest Threads
Log In
Create Account | Lost your password?