The middle part of any narrative trilogy is usually the darkest one, the one where things take a turn for the worse, characters are put through the wringer and thematically things stay grey as opposed to a clear cut black or white. In the world of StarCraft II, Heart of the Swarm represents this middle chapter, and by simply taking control of the Queen of Blades (Sarah Kerrigan) and in turn the entire Zerg race, a hive mind-like alien species made up of one part squishy and gooey and another part childhood nightmares, it really is a perfect setting for things to take a much more sinister turn.

As far as campaigns go, Blizzard is well versed in staple cinematic storytelling techniques that focuses on a small group of characters in a grandiose setting, so Heart of the Swarm does not disappoint in both its sheer spectacle and scope. Keeping Kerrigan as the central character and her more human traits ever lurking on the surface helps ease players into the mindset of the Zerg race which is presented in a much more sympathetic way than seen previously. They’re still quite hideous by design, but thanks to the exceptional art design and use of colour, you won’t mind striking up a conversation with a large pulsating mesh of blobs with tendrils between each campaign mission. 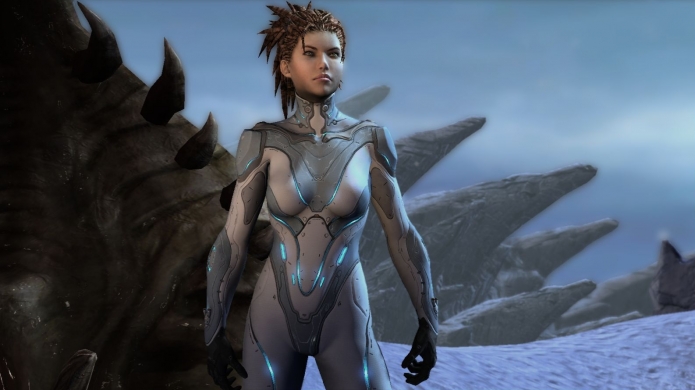 Production values are of the highest order, something we’ve come to expect coming from Blizzard, with both the pre-rendered cut-scenes and those rendered in real-time showcasing great pacing and storytelling propulsion in addition to simply looking fantastic in terms of art, graphical detail, and animation. This is one area which puts Blizzard amongst a select few developers; an innate sense of pacing and structure that they bring to each new release regardless of how one may feel about the overall game itself. No doubt the story and its presentation adds considerable weight to the fairly linear mission structure, which unfortunately doesn’t really allow for much experimentation outside of upgrading skills and unit abilities to match your preferred play style. This means that replayability is limited to using a different set of units and abilities to tackle the exact same objective and AI.

By keeping Kerrigan as an upgradeable unit as she embarks on a seemingly selfish quest to rescue Jim Raynor (the main Terran character from Wings of Liberty) and destroy the corrupt and all-the-way evil Emperor Mengsk, the specific focus on her character and her abilities helps shape each mission to provide a mix of both action and strategy-centric objectives -- ones that evolves alongside the story, and the entire Zerg race. Without the need to worry about balancing each enemy encounter this has even allowed for campaign-specific units and abilities to prop up at regular intervals including a great section of missions taking place on the original Zerg home-world where a race of large hulking almost dinosaur-like primal Zerg have survived and evolved over a span of millions of years.

The threat of an ancient force threatening to destroy the entire universe as hinted at in Wings of Liberty is given a few more hints in Heart of the Swarm, and will no doubt come to full bore in the anticipated third entry Legacy of the Void, but this takes a definite backseat to the more intimate story of Kerrigan simply trying to find her place in the universe, one where she may one day very well play a large part in saving. We’ll probably have to wait another few years to play through the conclusion to this so far exceptional series, which may seem like a long time, but it allows for what many consider the real StarCraft experience to live and breathe -- that being of course, the multiplayer. 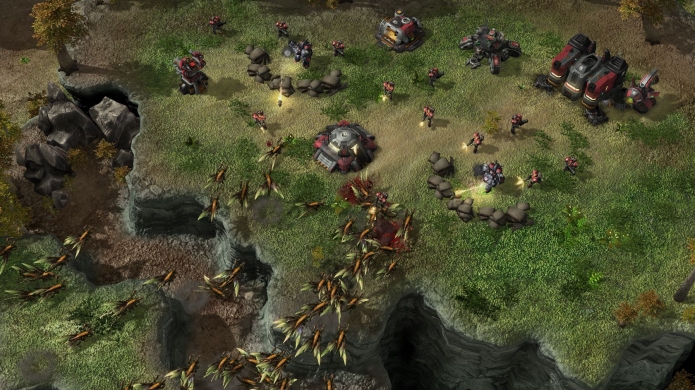 The first three minutes of a multiplayer StarCraft match plays out like an intense muscle memory and cognitive exercise, where each second and each command could very well determine the overall outcome. During this time regardless of the race you are controlling you will need to keep a keen eye on the map, your resources, initial combat units, an upgrade path, as well as begin planning your base’s expansion. And throughout all this time and the next few minutes you will also need to be able to adapt and change strategies whilst reacting to your opponent (or opponents, when playing as part of a team). It’s complex, intricate, and relies clearly on hardcore skill, and due to this may seem too daunting to new players and casual gamers alike -- who may very well stick to playing the campaign. But to Blizzard’s credit and especially with the Heart of the Swarm expansion, multiplayer StarCraft has never been more accessible.

Although regular patches continuously make changes to keep each race balanced (which will no doubt see an increase in their frequency due to the seven new units introduced with Heart of the Swarm), StarCraft is a well known and premier multiplayer strategy experience because the more you play the better you become. That simple statement could very well apply to how Blizzard has approached the core multiplayer component of StarCraft II, introduced with the first entry Wings of Liberty and refined to near perfection with Heart of the Swarm. Introduced in Heart of the Swarm is a great tutorial/training mode for multiplayer split across three stages for each race that works well to ease players into how exactly multiplayer StarCraft is played. Couple this with detailed post-game statistics and the ability to watch replays from any perspective, learning the ropes has never been easier.

The first training stage teaches the all-important build queue and how exactly the first few minutes should play out, going so far as to provide in-game objectives and prompts letting you know exactly how many SCVs (if you’re playing Terran) you should be producing to collect minerals and when exactly you should build Silos (to increase your unit cap) and Barracks (for training a few marines). As the stages progress and introduce full upgrade paths and units/structures to build, mine for gas too early and the game will call you out on that mistake whilst even providing hints on where to expand and how to scout potential enemy locations. It’s great practice and the AI is structured in such a way that it scales and adapts to your skill, with post-game information providing detailed timelines on each of your commands allowing you to hone and improve with each attempt. 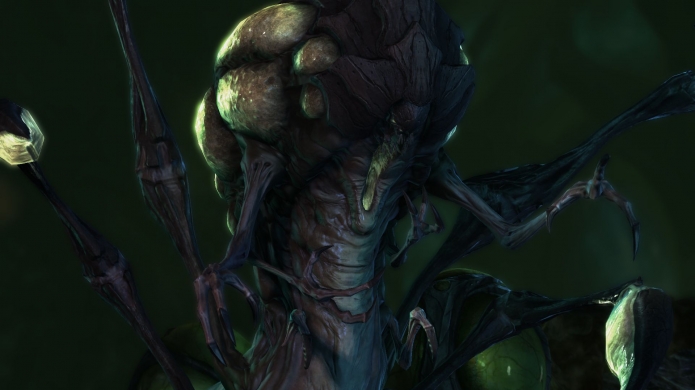 When coupled with the ranking/ladder system introduced in Wings of Liberty you will more often than not be paired up with or against players of similar skill, making a game that features a huge gap between skilled and unskilled players a lot of fun and competitive for both casual and serious players. As an expansion, the introduction of new units also means that even experienced players may need to spend some time training or playing against AI opponents, as they may find their tried and true strategies of the past no longer having the same effect. For a game that has been a staple of many eSports competitions of the last few years, this is both an exciting and potentially huge change to current professional StarCraft II gamers everywhere.

For the more casual players the new units introduced are definitely welcome additions, with the Zerg’s Swarm Host being a standout as it bursts out an endless stream of locusts at enemies and can even remain hidden whilst burrowed, leading to specific steps needed to be taken in order to mitigate the danger they pose. On the Terran front the introduction of the Hellbats allows for players to make short work of any Zergling or Zealot rush.

The Protoss race gets three new units that initially seem quite mysterious, until an opponent uses them to their advantage and makes short work of your forces as can be seen with the new late-game Tempest air unit. All the new units have their own strengths and weaknesses as expected, which in turn affects the same of all the existing units in the game, which again should see fundamental changes to many player strategies out there. 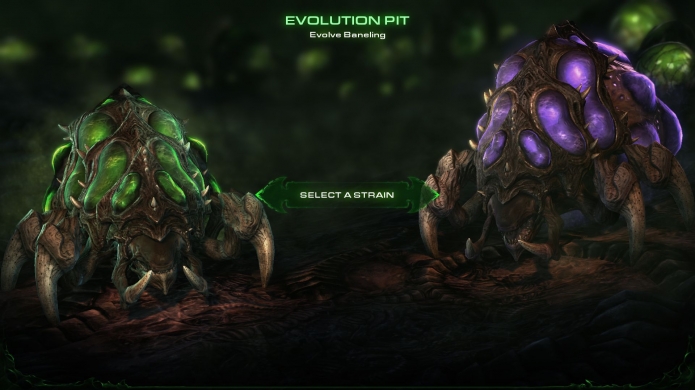 With the interface given a complete and simplified overhaul, getting to each part of StarCraft II has never been easier, as you’re now always a click or two away from accessing the Campaign, Multiplayer or Arcade modes found in the game. The improvements made to the interface especially makes accessing and navigating the Arcade section a breeze and allows you to hop into countless puzzle, tower defense, horde, MOBA (ie DOTA) and even RPG-style mods created by the community in a manner of seconds. It’s great to see this section of the game expanded upon by Blizzard, as the generally intense nature of the standard multiplayer mode of StarCraft will no doubt make many yearn for something a little bit more relaxing.

Well to some of us at least. But all in all Heart of the Swarm is another exceptional expansion from Blizzard, one that no doubt fans would need no persuading at all to buy. But its accessibility over previous entries may be its biggest strength as for those who’ve always been curious about StarCraft multiplayer but may have felt too intimidated to give it a try will find that learning has never been easier, and is still a hell of a lot of fun, even if you’re not in it to climb ladders and make a name for yourself.
Latest Comments
Link