As much as it fills a void or disturbance in the Force Star Wars fans have felt for decades, thanks to the likes of PC classics like X-Wing vs TIE Fighter from LucasArts and the cinematic spectacle that was Rogue Squadron on the Nintendo GameCube, Star Wars: Squadrons excels by filling another. That is, a dream held by many a Star Wars fan since they first heard about this thing called Virtual Reality back in the ‘90s.

The ability to jump into the cockpit of an X-Wing, take to the stars, and duke it out as part of an elite squadron of fighter pilots. Or jump into a TIE fighter and see if that unmatched speed could turn the tide against a ragtag group of Rebels fighting for freedom. True first-person immersion, with the ability to look up through your A-Wing’s cockpit to see the underbelly of a Star Destroyer after completing a successful attack run. 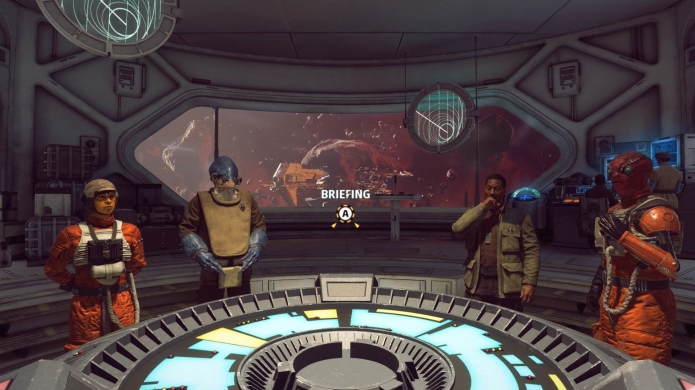 From Motive Studios, the team behind the single-player campaign of 2017’s Star Wars Battlefront II, Star Wars: Squadrons sets its galactic sights on a post-Return of the Jedi setting – and the ongoing conflict between the New Republic and a fractured but still formidable Imperial Fleet.

True first-person immersion, with the ability to look up through your A-Wing’s cockpit to see the underbelly of a Star Destroyer after completing a successful attack run.


In terms of mechanics Squadrons lies somewhere between the sim approach of TIE Fighter and the straight-up arcade shooting of Rogue Squadron – never quite committing to either. It’s secret weapon though, it’s torpedo in the exhaust vent, is its VR functionality.

Played entirely from a first-person in-cockpit view, with minimal HUD depending on your preferences, everything from engine speed to power management to targeting and missile readiness is there to view; with one eye always looking ahead. With X-Wings, A-Wings, Y-Wings, TIE fighters, TIE interceptors, TIE bombers, and more, the level of detail is commendable, as is the way each craft provides its own readout flavour. 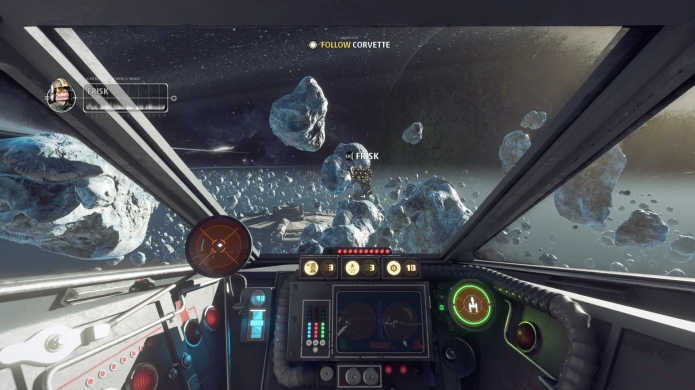 But, in its commitment to authenticity there’s no denying that when played on a standard display there’s a lot of screen real-estate taken up by everything from radars to cockpit dividers. You know, the stylish but octagonal mess that is the TIE fighter cockpit view. Blind spots that in addition to tapping into that laser-guided focus one might require as a fighter pilot, limit the spatial awareness that comes from a more traditional third-person view and the ability to freely rotate the camera.

Don a VR helmet on the PlayStation 4 or PC (for this review we used the Oculus Rift S), and what was once claustrophobic or limited becomes open and natural. Like a Rebel fighter pilot looking through an orange tinted visor, VR in Star Wars: Squadrons is more than simple immersion. Being able to look freely around the cockpit to get a closer look at instruments takes an Astromech backseat to the ability to see out into the wider battlefield.

To glance left or right as you make a quick turn in an X-Wing, or to see through the bottom of your craft in a U-Wing – a little bit of extra peripheral awareness that translates to more precise bombing runs. You can track enemy fighters in VR more readily, and best of all gauge their overall distance without the need to rely entirely on instrument readouts.

Without a doubt it’s simple, you see more in VR and that immersion feels borderline essential when tackling Squadrons’ multiplayer Dogfight and Fleet Battle modes. Especially if you fly around in a speedy A-Wing, where tracking enemy fighters in and around and behind your position feels natural.

Don a VR helmet on the PlayStation 4 or PC (for this review we used the Oculus Rift S), and what was once claustrophobic or limited becomes open and natural.


Okay, so it’s worth highlighting that Star Wars: Squadrons is entirely playable and enjoyable without VR – but the truth of the matter, and virtual benefit, goes beyond that incredible inside the cockpit feel. Several almost baffling design decisions begin to make sense, and better yet – work – when played in VR. Throughout the campaign, which alternates between New Republic and Imperial missions, you move between the hangar and briefing room. To talk to your squad, other higher-ranking characters of note, sit in the cockpit like little Ani, and attend mission briefings.

All of this is presented from a static first-person view with minimal camera movement. Moving about in a VR-like or pre-rendered CD-ROM-era teleport fashion.

And so, conversations begin to drag without a dynamic camera. Mission briefings lack excitement. In VR these problems just about disappear, conversations feel personal when characters are standing in front of you (though we would have liked some form of choice in responses), and mission briefings feel like you’re there standing around a holo-table ready to take in all that holo-goodness. 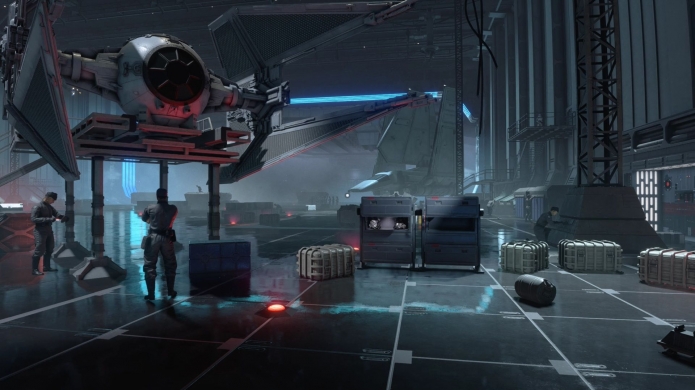 Pre-flight multiplayer also uses the same presentation, the briefing table setting to see your squad and a hangar to make any loadout adjustments. Without VR though it all feels a little superfluous. Not that VR will encourage squads of strangers to talk strategy around a briefing table (that sort of thing will never work), but it cements the feeling of being in a freighter about to head into battle. One area Squadrons excels no matter the presentation is how you can adjust the load-out across hull, lasers, missiles, and other options to make each craft feel like it has far more than one advantage or benefit.

From sound design to music to tiny bits of visual detail and things like lighting effects, Star Wars: Squadrons looks wonderful and runs well across a wide range of PC hardware. Even though character designs feature a heightened or animated quality, it all blends and the overall story of the New Republic building its own version of a giant-weapon feels in step with the expanded universe and some of the best Star Wars games we’ve seen throughout the decades.

That said, unlike the ship stuff, pilot customisation falls short of tapping into the various alien races and oddities seen across Star Wars. Yeah, no Nien Nunb. 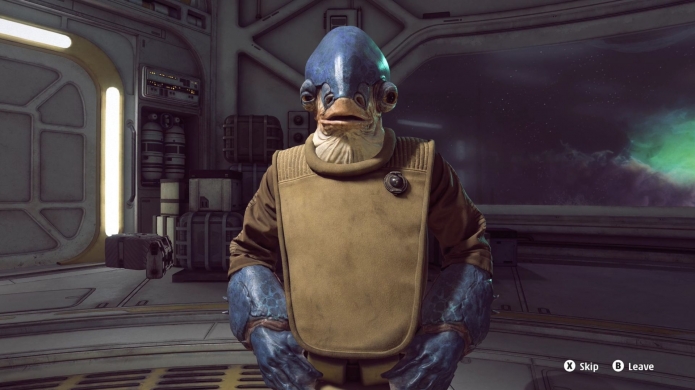 Even with the sheer thrill found throughout the campaign and multiplayer in VR, there are several missed opportunities that could have turned what is a solid Star Wars release into an all-timer. Mixing up combat heavy missions with more obstacle course-like runs or simple flight missions would have made more sense for those static character moments and lengthy discussions that happen between missions. Not to mention open the door to a Beggars Canyon style race course.

From sound design to music to tiny bits of visual detail and things like lighting effects, Star Wars: Squadrons looks wonderful and runs well across a wide range of PC hardware.


Upping the player count from 5v5 to a more sizable formation of fighters would add more variety to the multiplayer and alleviate some of the blandness that comes from the Fleet Battle mode – which doesn’t reach the large-scale thrills that you’d want from a Star Wars flight game. Also, it’d add weight to both squads and lone fighters fighting alone or together, working their way through the battlefield. As it stands the double and triple-team represents the entirety of Squadrons’ fun but limited Dogfights.

In the end though, by not committing to either the sim-style of TIE Fighter or the arcade-action of Rogue Squadron – the middle-ground falls a short of brilliance. Most campaign missions follow a similar flow, rarely delving into sheer cinematic spectacle or pure sim-like protracted and intense battles. But there’s no denying that when played in VR Squadrons often feels like a dream come true - and when it stays on target, it’s a force to be reckoned with.
Latest Comments
Link