SSX from EA Sports is back, edging slightly closer to a realistic feel of where snowboarding is and may be heading, while still maintaining the huge and impossible we’ve come to love from previous SSX releases.

The aim is to help your team gain ownership of the globe by racing other players, getting the best trick score on a run and surviving the differing deadly descents. You can do this three ways, with World Tour, Explore and Global Event modes, all offering different challenges, progression and of course, bragging rights in each area.

World Tour gives you the story and sees you starting as a member of Team SSX (now meaning Snow, Surf and MotoX), a group of extreme sports lovers made up of some favourite faces from previous SSX games with a few new faces dropped in, who are out to conquer mountain ranges around the globe. With nine ranges built from exaggerated NASA topographical data, each range offers a variety of terrain at each drop-in for you to conquer in a race, trick score and finally survive its deadly descent, which varies in terrain and riding style with each location. 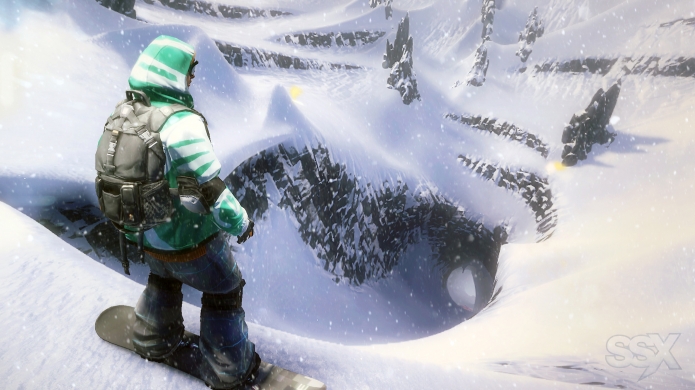 One of the SSX team-members has decided to go rogue (with all funding going with him) and prove that he can take the globe by himself, leaving you constantly pushed in your riding skills against the rest of your team and the ghost data from this rogue member, who always seems to be one step ahead of Team SSX.

Control options for air tricks are available for right stick feel, button taps or you can even switch back to classic SSX for an old-school feel. You’ve also got a few chances to rewind where mistakes are made, but these are limited, so you’ll need use them wisely.

Unlocking new ranges on completion of one or a group of ranges is the way forward, with each terrain supplying a race challenge to unlock a new playable character from the team, followed by the speedy comic book style intro for said character. There’s also a chance to unlock the only real-life character, and probably the only person who would come close to landing any of the feats of SSX, Travis Rice.

Explore mode gives you open access to all the regions with every player to really see what you can put down on each run and to pick your favourites. The aim here is to lock down your best point scoring run.

As you trick, air, slide and descend your way through each, you earn XP currency to be used for upgrading boards, armour, wing suits and ice picks. You’ll also need this to buy into Global Events, for the possibility to win more of this currency if you can qualify in one of the five brackets that divvy up the pot, as well as a Leaderboard standing, that may see you slide up or down even when you’re not playing. The unique thing with this is it’s all real-time, so your friends and other players from around the world may be dropping in next to you on any run.

You can also create your own Global Event where you tweak the rules, time-limits, allowable equipment as well as what a win earns you.

In every mode a key is to combo together some moves and get tricky, giving you boost where needed in races or approaching a jump. From there any tricks become uber and you aim to get Super Tricky, varying the tricks even more making them super uber and providing you unlimited boost while you’ve got it. Super Tricky is also the time you can do each player’s signature move.

With vast amounts of fun terrain to explore in whatever mode pushes your SSX riding, strap in, drop in and shred it out.