SOCOM’s been in the game for a lengthy volume of years now, so you would expect it to have reached the ultimate heights of quality gameplay mechanics, top notch AI, graphics to rival the best of them and an unrivaled mastery of storytelling and character development. Or at least be well on its way to achieving this. Well SOCOM Special Forces gives it a go and comes out looking a little mediocre, not necessarily just by visual standards, more as an overall package.

Considering that the Sharp Shooter, Sony’s new shiny, big red gun peripheral was sent to us with our copy of SOCOM Special Forces, it seemed they were pretty intent on having us believe this is the ultimate way in which to bury a bullet in your enemy’s skull with “unrivaled accuracy”; providing true immersive gameplay and ensuring “you hit every single target, every single time”. It’s a big claim and if you pick it up you’ll see it has its advantages, coupled with several flaws, but it’s the best gun peripheral on the market (not that that’s saying much, just sayin’). Before we get into the SOCOM-branded, Special Forces sniping and bullet bashing action of the game itself, let’s talk a little about this gigantic gun peripheral. 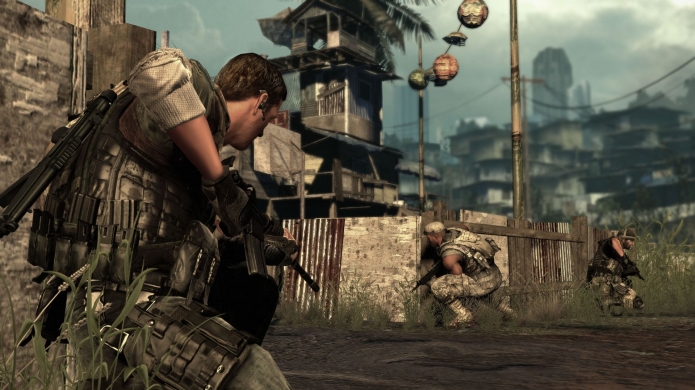 The Sharp Shooter’s a big peripheral. One of the biggest I’ve seen. It feels comfortably weighted once you insert your Move and Navigation controllers and is pretty similar in dimensions to the larger rifles you might have used to play your favourite arcade on-rail shooters. I’ve tried my hand at several third-party machine gun/rifle style peripherals and they’ve all had the main issue that plagues third/first-person shooters -getting around. Sure you can aim and shoot, even reload but walking around successfully was, until now, limited to the Wii ala Resi 4, which really just worked.

I’m not sure what’s with the red colour scheme, unless Sony designers were attempting to recreate the colour of your slaughtered victims, the peripheral is a little too bright and friendly looking (Fisher Price bright). It doesn’t really fit with Sony’s general black-is-better colour scheme, although they chose to take the same visual and design cues they took from their previously released pistol Move peripheral when creating the Sharp Shooter.

So, how about the game itself and not the oft scoffed move controller? SOCOM Special Forces delivers your standard, run-of-the-mill war story. Foreign, obviously bad dudes, need to be taken out. If you so wish, you can find the scattered tactical info, otherwise it’s just a case of having to guard this or that position whilst waves of predictable enemies trudge into your line of fire. It’s a sort-of cohesive story, but it leaves little to the imagination and lacks that memorable punch. 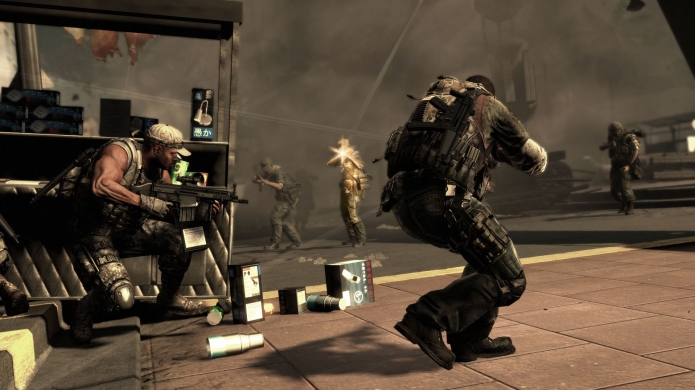 Dropping in and out of controlling our main soldier, and his female counterpart we end up participating in a basic run and gun style of gameplay that unfortunately never allows for much variation based on level design or participating in poorly designed and executed stealth missions in which the easiest technique is to hide in the shadows from a distance and snipe every enemy NPC (I must admit, there is something intensely satisfying about sniping a dude from a long distance whilst targeting with a big tangible gun) leaving the option to casually walk through almost the entire level.

Controlling your squad is a simplified affair restricted to the ability of instructing, individually, two teams with a left and right tap of the D-Pad to head to a spot and a down tap to recall them to your position. This lack of depth and botched attempt at team tactic control gives you no real advantage other than a basic flank of the enemy, which frankly is unneeded as the enemies never react accordingly anyway.

The Mass Effectish cover mechanic will find you consistently emptying your clip into the very concrete wall you are using to save your skin, instead of actually aiming around the corner at the evil bastard in the distance.

And as mentioned, the enemy AI leaves a lot to be desired. Most of their tactics involve kamikaze runs, letting fire a hail ‘o bullets which are nearly always perfect shots. Even worse is the enemy’s reaction in stealth missions. It’s possible to snipe an enemy and move on to the dude next to him ad nauseam - as long as you don’t miss your head shot, no one will know the difference. Getting caught poses no real threat as running back to another cover or seemingly dark area seems to confuse the enemy who quickly give up and go about their day, you know, discussing bombs and evil and that. Stand almost directly next to an enemy in a dark area and they’ll probably not even notice you. You’re more than welcome to execute a silent kill, however, if using the Sharp Shooter, activating it requires a quick pumping of the pump-action reload function, which 70% of the time works all the time. 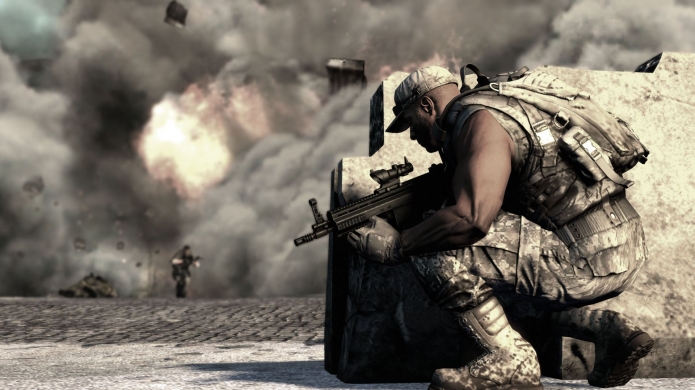 Adding insult to injury, death animations are laughable, and take way too long. Your soldiers stumble unrealistically to their demise as they drop their weapons and their bodies clip bits and pieces of the surrounding environment making for an unrealistic end to something trying oh-so-hard to be nail-biting, gritty and real.

I grind my teeth when I realise they release an existing, already established IP as an on rail shooter so I was curious to play what should be a complete gaming experience utilising a gun peripheral and SOCOM is the best you’re going to get in this respect thus far. SOCOM Special Forces is the ultimate way to play with a gun peripheral but as a game utilising your standard PS3 controller, well it ends up a mediocre game with none of the depth, or clever AI it really needs. Whilst its hordes of mindless, generic, evil kamikaze AI make for great target practice, there isn’t much else on offer if you’re a veteran third-person gamer. So steer clear my fellow gamers, unless you’re inclined to muck around with the gun peripheral (which contrary to my first thoughts on it overall, surprisingly makes SOCOM much more enjoyable) and if you’re super keen I suggest you wait till it’s at bargain bin status, or maybe try a rental.