There's a grand tradition of physical comedy in Hollywood, one that pre-dates the moving picture revolution and harkens to the tumbling antics of theatre troupes. From Charlie Chaplin to Buster Keaton and on to Jackie Chan and Johnny Knoxville, some comedians have put themselves at great peril just to elicit a giggle.

I think that's why for me, the funniest moments in games are the ones where I'm laughing at myself. Sniper Elite 4 is pure physical comedy, a game about the hilarious ways Axis soldiers can die at your hands, but my favourite parts all involved my own death. The way it happens is simple; you tee up a few dozen horrible deaths for Italian soldiers — Sniper Elite 4 takes place in the Italian theatre of war— and eventually you screw up. Someone notices, and the AI — as janky as it has ever been in the series — beelines in your direction. The shit having hit the fan, the wall behind the fan and everything nearby, you are forced to scramble to stay alive. This is usually how I die — scoped in, peeking around a corner, when suddenly my reticle starts adjusting vertically very quickly as I have stepped too far over a ledge and have fallen to my doom. 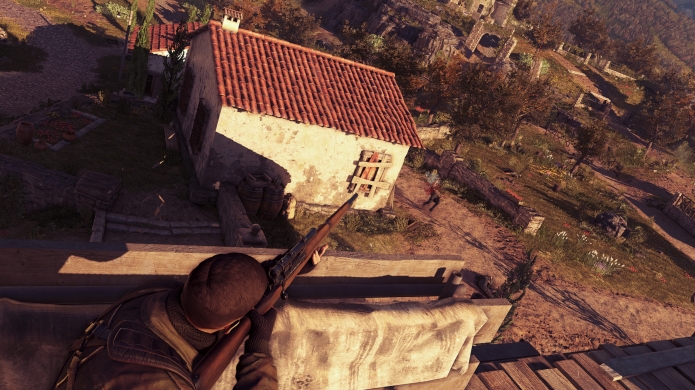 Having already watched so many knee-crossing crotch shots and chest tightening lung shots, the sudden drop and the quick stop is always enough to take wry amusement into the realm of hearty hilarity. That's the kind of game Sniper Elite 4 is — a slapstick comedy thrill-ride where every character is ripe for the skewering.

Actually, treating the game as a comedy is the best way to accept the nonsense held within. As stories go, the tale of OSS Sniper Karl Fairburne's trip into Italy would be considered over the top even by Alistair MacLean's standards, and it devolves further as you work your way further in. If I'm playing it for the sort of Buster Keaton style of deadpan vaudeville, I'd honestly prefer title cards in between levels — the voice acting and scripting leave quite a bit to be desired, and I don't personally need much excuse to shoot Nazis (or their sympathisers).

Nevertheless the game works hard to keep you invested — fail though it might — and it drags you through a series of grander and grander scenarios as the game careens towards a grand finale on an Italian missile base — each of the Sniper Elite games has done a good job of transforming the drudgery of sniping into an action packed rollercoaster that James Bond would be proud to command. 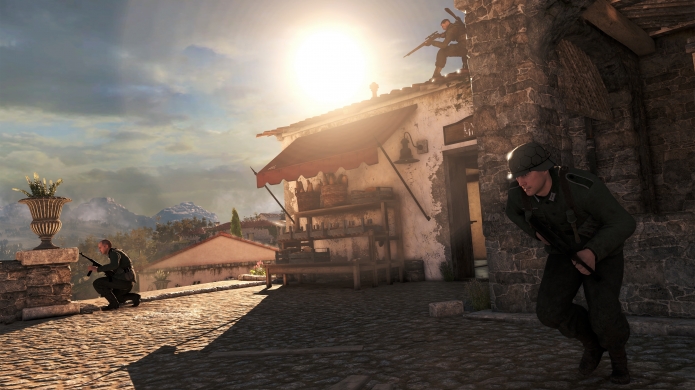 Sniper Elite 4 does all of this on a much larger scale than the previous games, too. The levels are much larger — almost too large in a few cases, as it can be disheartening to assassinate your target from an extreme distance only to find out you now need to make the 600m journey to loot their corpse.

The size is more breadth than length, if that makes sense — the mission areas have much larger square footprints, and in general they're divided into zones for you to tackle. It makes the game feel much more open — though this is no open world game — and increases the amount of options at your fingertips when you're trying to engineer someone's death.

I call them zones because it seems to me like there are areas the AI will and will not enter based on the zones of a map. I say seems because I don't have direct proof, but you could see the AI would stick around certain areas even while their friends were alerted to your presence and streaming in your direction. It's not actually a huge flaw — the zones themselves adhered to areas of conflict thanks to clever map design, but it was noticeable when I would scramble away from an area only to seemingly lose them quickly.

The trade off is worth it in my opinion. I'm not looking for F.E.A.R. level AI out of my duck gallery shooting game, and once they get in close the Axis soldiers are surprisingly capable anyway. The upside is that you can sit in one location and really take your time lining up an ultra long shot — which is probably the essence of what a sniper game should be about. When things get close up and personal, it's nice that the AI is competent, but it's a game where the main aim is to plink them in the brains from at least 100m away. 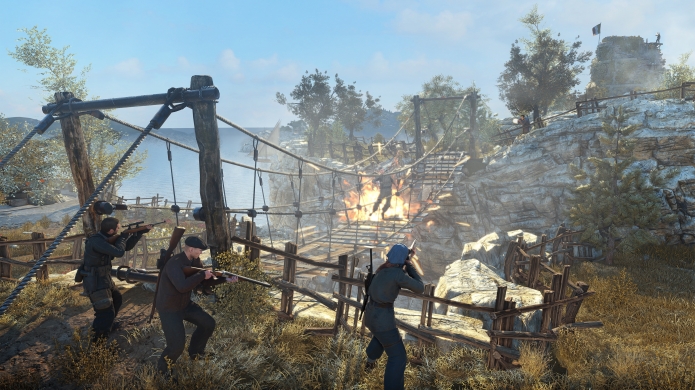 Sniper Elite 4 looks gorgeous, too. There's an attention-to-detail which shouldn't be surprising when you realise you're spending a lot of time looking at things up-close and personal. Indoor environments feature clutter, bricks and tiles are painted into textures. The gorgeous mediterranean islands feature bright colours, the storm-ridden bases feel gloomy and gross. The sound didn't seem to keep up — in that I mean, it's as good as it ever was in Sniper Elite 3. Generators make way too much noise — though they should, being noisemakers — and your weapons sound great, but no more (or less) realistic than in previous games.

Multiplayer is a double-edged sword. The pratfalls I love so dearly in the singleplayer campaign are doubled when you play the entire game in coop with a buddy, but the AI hasn't exactly been honed to deal with two enemies. If you're both together, the AI seems as good as ever, but if you split up across the massive maps you can easily befuddle the AI into a state nearing paralysis. It tends to right itself as you and your partner reconvene though, and the horde mode keeps you close together with your buddy so it's not much of a problem. I actually enjoyed playing Horde mode more than I did the regular campaign in coop.

With each release of the Sniper Elite series, Rebellion is happy to adjust its aim a few millimetres and fire again. That's probably its greatest fault — each game is happy enough to be better than the last without doing anything too different. For me, that's enough to keep me coming back each time — is it so terrible that a game delivers a better version of what you expect each time? Especially when it's so repeatedly hilarious as it is in Sniper Elite 4.

When I reviewed Sniper Elite 3, I voiced concerns that the formula might be wearing thin — I don't think so any more. Sniper Elite 4 exists as a palate cleanser experience, mindless comedy I use to reset after playing other games. It's unashamedly silly, and brilliant as a result.
Follow Us
Latest Reviews
More...
News Feed
Advertisement
Latest Threads
Log In
Create Account | Lost your password?