Here’s the thing about Skater XL, in skater speak: it’s a set of stairs; intimidating, big and steep and you’re at the end of a mammoth session. This is the last gap. You’re banged up, your legs are jarred and wobbly. You’ve got cuts and grazes all over. You might have a delayed concussion and your board is chipped to the nines. It’s definitely seen better days. But, your crew only has so much battery left and you’re losing light. This set of stairs; intimidating, big and steep, is the last piece of the puzzle towards sponsorship. Nail this, and you can only go up. Thing is, to do that, you gotta go down, and you gotta do it now.

Or, in layman: Skater XL is a very ambitious game with a massively steep learning curve that literally pulls you away from every sense of skateboarding videogamery you’ve ever had. 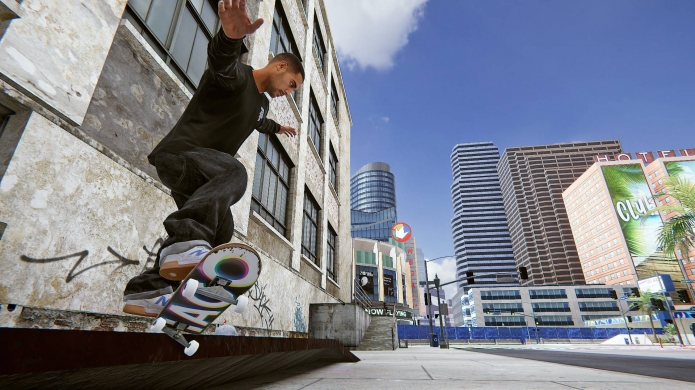 Either way, it’s a tough sell, but the reward for effort and perseverance is a good one, the bigger question: how committed are you?

"Back to skater speak: nailing a line in sequence, but without thinking about your next trick… just rolling, is kind of the best part..."


Irons hot and striking them at the right time is a unique thing. Did the team behind Skater XL know that they’d release just ahead of Tony Hawk’s Pro Skater 1 and 2 Remaster? Did they know about the upcoming documentary about that series, Pretending I’m a Superman: The Tony Hawk Video Game Story? Did skateboarding being announced as an upcoming Olympic event speed up development? Or, as I’ve gleaned from Aussie expat, Dain Hedgpeth, who co-founded Skater XL developer, Easy Day Studios, was it just the right time for a game about skateboarding that took the art of skateboarding seriously?

Back to skater speak: nailing a line in sequence, but without thinking about your next trick… just rolling, is kind of the best part. But, when you do have a plan and you hit that ledge hard, and land that flip trick hard (not name-dropping knowledge here) and don’t come off hard. Well, that’s a thing of pure elation; pure expression. 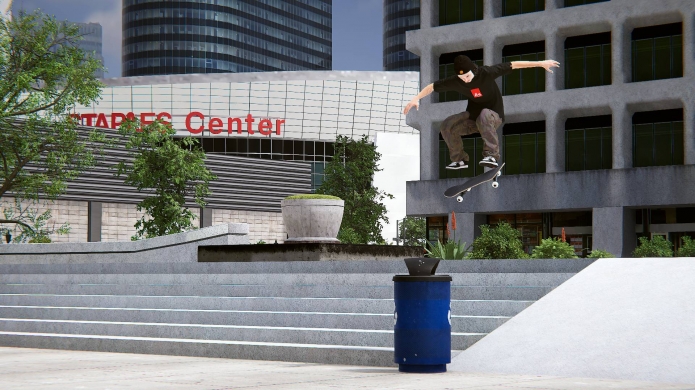 Real speak (and for the layman): skateboarding in the mainstream leans heavily on the term “expression”. And that’s the correct word for skating at all. You express yourself in every and any single moment on a board -- whether it’s leaning back as you just coast down a sidewalk or if you tweak an Indy grab while riding vert after gaining some serious air. You’re expressing yourself no matter what. But it goes deeper; are you expressing your ability versus your want? Are you expressing a technical side of your riding no one else possesses? Are you expressing a work ethic to land a sponsor, or to keep one happy? Are you asserting your expression because you’ve been doing this longer?

"However, it fails at one of the most key aspects of the platform upon which it’s presented -- as a videogame it’s pretty barebones..."

Skater XL answers that by just being what it is. However, it fails at one of the most key aspects of the platform upon which it’s presented -- as a videogame it’s pretty barebones. Don’t get me wrong, the hybrid Skate flickit controls against each analogue stick being a *sort of* extension of your left and right feet is pretty cool, but you rob Peter to pay Paul with this system in that controlling the actual direction of your avatar is done by using the left and right triggers, so you have to ‘unlearn’ how you move in a game meant to allow for fluid movement. There’s weight and physics applied to all of this too, so getting deeper into the trick manifest starts to ask you to articulate input in ways you shouldn’t in this day and age of gaming. Long and short: a kickflip is easy, a nollie 360 inward heelflip frontside 180 to backside salad isn’t. 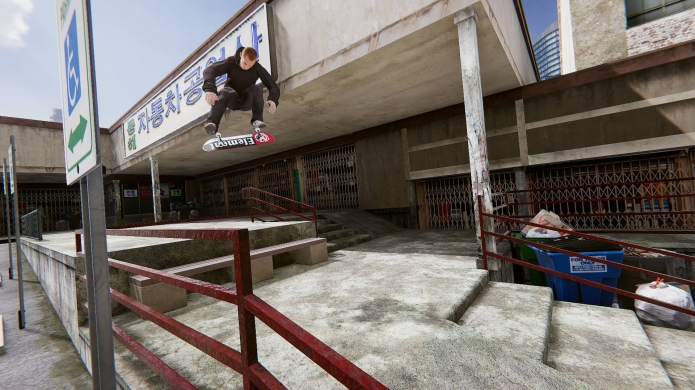 From the coping on console, you get Easy Day High School, The Big Ramp (which I’ll detail more shortly), Downtown LA, California Skatepark and West LA Courthouse. Included at launch are three community-built maps from the PC build (and community, natch), but that’s kind of it. Don’t get me wrong, each of these maps is fraught with opportunity for tricking or stringing together lines. And the gap potential in all of them is amazing. It’s just that within each you’re left to your own devices, and you’re on your own. There’re no moving parts in any sections of the game; no cars, peds, other skaters… nothing. And it’s kind of in that omission the game’s nature bares its soul -- this is a title you need to make the most of, and if you’re of the ilk who likes challenges, missions or even a story, your imagination is going to be working overtime here.

"Think of it more as, like, a simulator. It has a huge community on PC, and these cats have created a massive world of user-generated content -- maps, brands, avatars, shops... even a magazine..."


This makes reviewing Skater XL hard. Because it is a videogame, but it doesn’t really do videogame. Think of it more as, like, a simulator. It has a huge community on PC, and these cats have created a massive world of user-generated content -- maps, brands, avatars, shops... even a fucking magazine. But that’s all them, and Easy Day leaves them be. On console, however, it’ll be up to the studio to drip feed that sort of content out, or work towards at least a shared online world, because right now, it’s a bit like the desert that surrounds The Big Ramp, which is a fitting metaphor and segue into my other big issue with the game.

The Challenges that do exist within the game are ones built around teaching you how to skate and to *Skater XL*. But all these are, are checklist guides on the “what you can do in this game” type of thing. One of my favourite things from EA’s Skate series was having this one mission to nail a specific trick on a specific ledge to get a perfect photo to try and be on the cover of Thrasher magazine. Not only did I enjoy the challenge, I found myself going off mission constantly around that spot and making new lines. The ‘tutorial’ stuff in Skater XL is great, but it just feels like an empty excuse to play with the world. Starting with an Ollie then finishing all the way through to a High Backside 360 in the basics cat is all good and well, but you kind of breeze through it and I can imagine some peeps might just forget half the stuff they learnt, and after you get through all the challenges tutorials, the game barely gives you a reason to apply them to your rolling.

"That it’s been a more community-driven project from its PC days thanks to an open-source approach, kind of makes it feel ‘middleware’, and I didn’t even like typing that, but it’s the truth..."


What’s cool about the above is the grounded realism and real-world application of skateboarding inside the game. Except in The Big Ramp map, which quickly reveals that specific playground as an afterthought, and that transition wasn’t ever really a part of said real-world application towards the game. Skate struggled with transitions as well, and riding vert with any sense of rewarding proprietary has only ever felt honest in Tony Hawk’s Pro Skater 3, which is odd because in that game everything is/was over-the-top. So, the aforementioned ‘sim’ idea of Skater XL really means it’s still not a full skating simulation, rather it’s one that showcases what more time and money could do with an Indie like Easy Day, and a concept like this. That it’s been a more community-driven project from its PC days thanks to an open-source approach, kind of makes it feel ‘middleware’, and I didn’t even like typing that, but it’s the truth.


Clipping the environment and going super-mannequin gets tiring quickly, and re-learning how to play a skating game is an initially daunting prospect, compounded heavily with no real structure to play. Desire rules the roost here, not guided design, and that’s what makes Skater XL, XS. It just doesn’t throw enough around from a directed sense for it to ever be anything but a game for hardcore skateboarding peeps. I put together the video embedded above with beats from one Mr Kosta Andreadis, and it took me ages. Not because I’m slow at making videos, but because nailing each line became an exercise in commitment. And as someone who has had a background in this world, I understood that, persevered, and was rewarded with the results. But skating is hard, and Skater XL is hard. And that’s the hardest sell.

With more time in development for avatar physics off the board (specifically in crashes), a new system for basic movement in the game, and some direction in a videogame sense, this would be as revolutionary as Skate was with its Flickit controls, but right now, it’s just not where it *could* be. Hopefully the content the PC community pours in finds its way to console, but as it stands, Skater XL is just too barebones and difficult for the everyday person to likely want to play.