Serious Sam dates back some but it’s also a new millennium FPS. In ways other historical figures like Quake or DOOM or Duke Nukem can draw on a history of sprites and rudimentary 3D spaces and character models, Serious Sam – to adopt a Tolkien timeline – made its debut during The Second Age. Large open maps with waves of enemies, projectiles aplenty, and an arsenal designed to offer up the biggest ‘Clean up on Aisle 2’ mess possible. Part sandbox, part arena, it was a hit. And one that featured some cutting-edge visuals to boot.

Like other foul-mouthed veterans in the first-person field, Sam has been missing for some time – with the last entry proper, Serious Sam 3: BFE, dropping back in 2011. With developer Croteam still at the helm, Serious Sam 4 has been a long time coming. Development began back in 2012. And on paper at least, the bright visuals, large open-spaces, and commitment to hordes of enemies and projectile-based carnage should be the sort of read-soaked fun we all need right now. 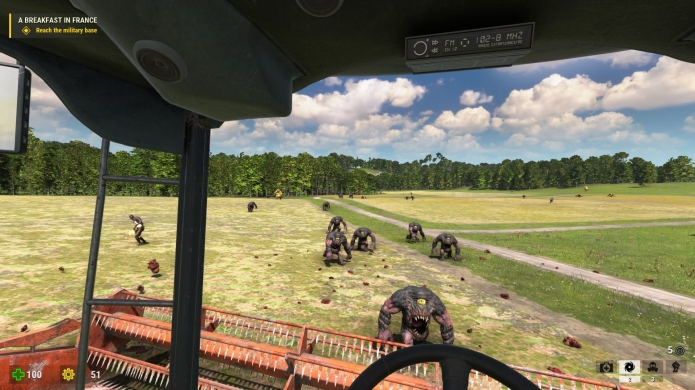 It isn’t. And really, the elongated development time should have been the indicator for what to expect. Serious Sam 4’s cinematic campaign is a Duke Nukem Forever sized mess, from performance issues to sloppy level design to outright ugly visuals. The story is C-Grade and the voice acting is campy and not at all amusing. It’s not funny.


Okay, the PopeMobile being a giant mech is the right kind of out of nowhere over-the-top silliness that you’d want from a Serious Sam game. That said, most of the large-scale battles feel like the same skirmish rinsed and repeated, rarely living up to the promise of cutting through hordes of enemies and giant lizards and demonic cyborg-y bipeds.

The core Serious Sam design hasn’t really changed all that much over the past couple of decades, most if-not-all encounters here devolve into straight-forward wave-after-wave battles without the arcade-style ‘Wave 3 of 4’ indicator to let you know how long is left. It’s the sort of thing where you need to take out this type of enemy before the next type spawns in, and it wears out its welcome quickly. 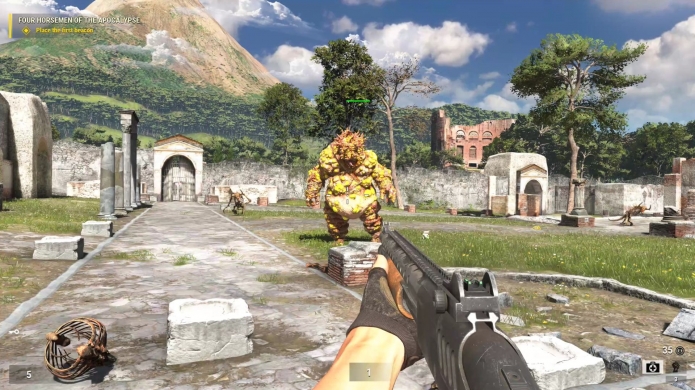 Horde-style combat is not a bad thing in and of itself, but the highly touted ‘Legion’ system which can apparently render thousands of characters on screen at once is basically a bust. A pre-release feature showcased as a key part of Serious Sam 4 the truth is you see it twice. During the climactic final stage battle between humanity and the alien horde, and it’s also teased during the admittedly impressive introduction. The effect is not much more than set dressing, you can clip through most of it and the cut-and-paste animation makes it the sort of tech demo that falls apart the closer you look.

This naturally brings up the question - would multiplying the enemy count across Serious Sam 4 alleviate the ‘going through the motions’ feeling that permeates the campaign? The short answer, no. I’m not even sure it’s possible to create a first-person shooter that can draw on skill and player reaction time with thousands of enemies without devolving into a blur. When Serious Sam is at its busiest, visually, the experience can border on thrilling – but even here facing off against alien drones is more Galaga or Carnival Shooting Gallery than something that might draw on more than a modicum of strategy. 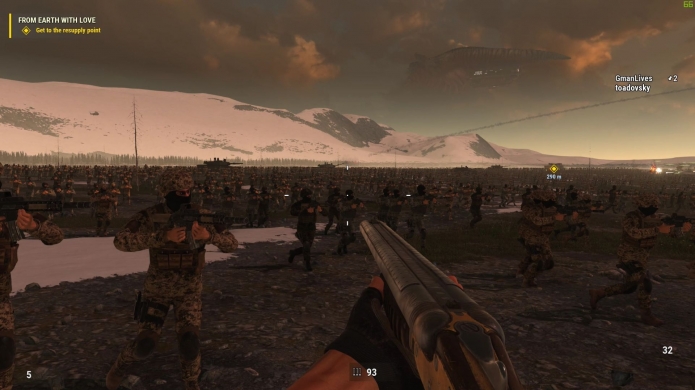 One down, one new. Kill one alien to have another replace it. It’s a setup that robs the experience of any surprise or genuine distinction between locations outside of a new weapon or enemy type popping up now and again. Even these two things are few and far between across huge levels that push your patience to near breaking point. The French Countryside setting is perhaps the worst offender in that it’s one of the largest levels in terms of raw play-area but also the most barren when it comes to actual combat. For a title all about lots of enemies on screen Serious Sam 4 never quite taps into that scale. It’s on par with what has come before, and what was impressive back in 2001 isn’t as impressive in 2020. Especially when there are some truly baffling choices being made.

Horde-style combat is not a bad thing in and of itself, but the highly touted ‘Legion’ system which can apparently render thousands of characters on screen at once is basically a bust.


Ammo (at least in the review build) is as rare as NPC eyelids in Serious Sam 4, at least on the higher difficulty settings. And yeah, the human character models are to put it mildly atrocious. Worse than what seen in Serious Sam 3 - both artistically and technically – and that’s a nine-year-old game. In a weird way it’s somewhat of an achievement, you could play this for several hours with the idea that it’s supposed to look like a bad PC game from a decade ago. How else would you explain it?

Throw in unimpressive textures, level geometry that looks like it was all dragged and dropped into existence from a level editor in a single afternoon, and glitches and clipping and animation jank across everything that isn’t an alien – you being to wonder where all that development time and effort was spent. There are multiple non-combat sections where the frame-rate on an RTX 3080 at 1440p dips into the 40-ish region. 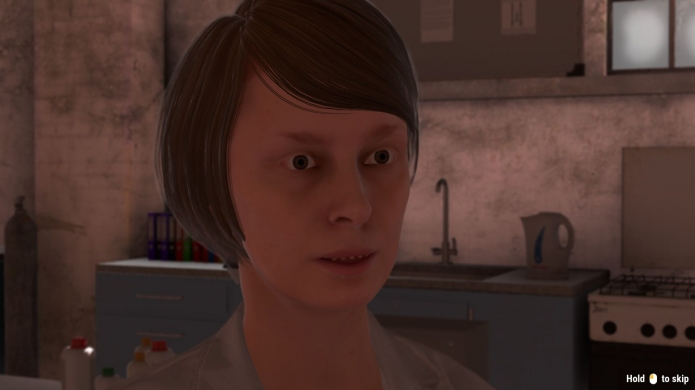 Croteam have delivered the goods when it comes to the Serious Sam series before, and some of that is peppered throughout Serious Sam 4. From hopping into a giant mech that also happens to be a Pope Mobile to a gun that fires giant cannonballs that can mow down anything in its path. Played in co-op with unlimited respawns and you could even go so far as to recommend it to fans looking purely at that side of the game. But then you remember that the cannonball gun doesn’t show-up until several hours into the campaign, right near the end, and that you had to use a piss-weak pistol for a lot of the time. Shooting at the same aliens from Serious Sam’s of old - in environments that are, well, even uglier than a one-eyed reptilian.
Latest Comments
Link