The Sega Mega Drive, otherwise known as the Sega Genesis, was the console that firmly planted Sega on the map. At the time of its release in the early 1990s Nintendo had all but complete market share thanks to the 8-bit Nintendo Entertainment System. But, the promise of 16-bit visuals and the additional power that came from improved 2D sprites and digital audio was enough to garner some interest. And we say some because it wasn’t until the launch of Sonic the Hedgehog that the Sega Mega Drive became a hit. And consequently, sparked the 16-bit console war, with the Sega Mega Drive in one corner and the Super Nintendo in another.

Sega Mega Drive Classics is a retro compilation of over 50 titles from the lifespan of the Sega Mega Drive, that includes many familiar names like Sonic the Hedgehog, Golden Axe, Streets of Rage, Comix Zone, Shinobi, Gunstar Heroes, and more. All lovingly emulated in a virtual bedroom that offers a bookshelf library to browse titles to play, an old-school CRT display that can switch to full screen, and of course a Mega Drive to load-up each game on a virtual cartridge. It’s a fun presentation that sells the old school nature of the collection, and one that doesn’t skimp on options - thanks to emulation that lets you apply filters to not only improve the image but also add scanlines, so you can turn that big screen LCD into a television from the era. 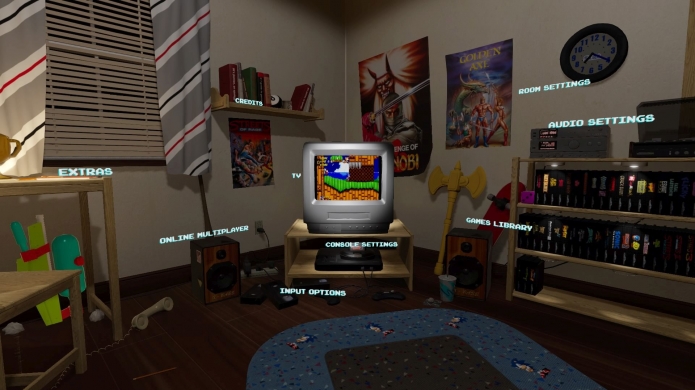 The only issue with the presentation, that plays into the impressive and generous 50-plus title library is the fact that all you get to see when browsing games is the title on a generic black Mega Drive box. Even the cartridges lack proper art. Without cover-art, descriptions, release information, bonus artwork or behind the scenes material, the overall package feels incomplete. And makes some of the switching between games a bit of a gamble in trying to remember what’s what. Or, if you’re not all that familiar with the Mega Drive library, a total guess as to what ESWAT: City Under Siege might be. A dated and somewhat generic action side-scroller in case you were wondering.

Sega Mega Drive compilations aren’t anything new, and this collection is essentially what you can find on Steam without having to pay a few bucks for each game, so really it comes down to the included games and the quality of what’s on offer. Without entries from Capcom or Konami what you end up with is mostly a first-party showcase for Sega’s talented internal studios. But even then, there are some glaring omissions. Like the absence of the Ecco the Dolphin series and the third Sonic the Hedgehog – which many consider to be the best entry in the series. It certainly had the best music. 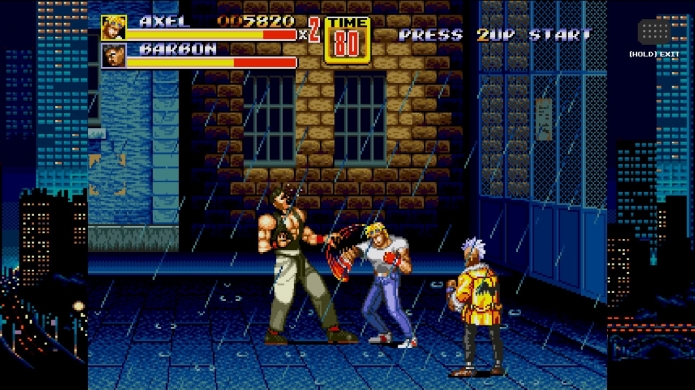 On the flipside to that, the cult classic and super rare Gunstar Heroes from Japanese developer Treasure is included and it’s still a great showcase for the Mega Drive’s impressive, if now dated, 2D capabilities. Thankfully fast paced titles like this are now a lot easier to play thanks to the rewind feature available across all titles. You can fast-forward too. Stat tracking has been added, which plays into challenges on offer for each title that are tied to Achievements and Trophies on the Xbox One or PlayStation 4.

In the end though for a retro compilation like to please everyone would be impossible unless it includes every game from the era, plus some love for the Sega CD and 32-X add-ons. Sega Mega Drive Classics naturally doesn’t go that far but you do get a great, if sequel-heavy, sampling of games which can live up to the classics moniker. This collection shines with the underlying impressive emulation of Mega Drive hardware, the variety of visual options you get to switch between realistic and pixel-heavy versions of each game, and the quality of life stuff like rewinding and picking up where you left off. And thanks to over 50 titles in the collection there are gems to find that you may not have played before - including Phantasy Star and Alien Soldier.
Follow Us
Latest Reviews
More...
News Feed
Advertisement
Latest Threads
Log In
Create Account | Lost your password?