First impressions not only make something of a lasting impact, but in the age of “change the channel” evolving to a form of “Hey TV, gimme PastaBOYZ on Twitch, CNN’s rolling coverage of Don Jr’s State of the Union speech, the latest episode of Walking Dead spin-off Still Walkin’, and the aquarium screensaver mashed up over the fireplace screensaver” - sometimes a game only has a few minutes to grab your attention.

Which is a roundabout way of saying that for the first hour, especially when played solo, Sackboy: A Big Adventure presents painfully straightforward platforming across various vibrant locales. Where no amount of impressive next-gen detail seen across materials and the imaginative environments can cover up. And that’s straightforward in the sense of jumping and moving about a 3D level with very little in the way of surprise, challenge, or momentum. 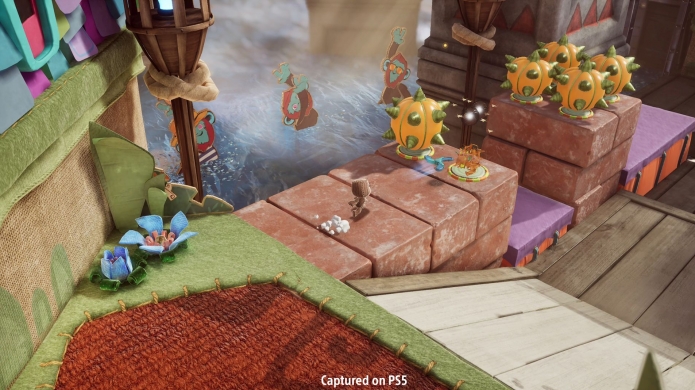 Compared to any of the 3D Mario games, the beginning of Sackboy’s grand adventure borders on insulting when it comes to level-design. Spoiler alert - it gets better.


But, before we get to the good stuff another slice of baffle cake is the lack of online support at launch, limiting the full couch co-op experience on PlayStation 5 to those that picked up multiple DualSense controllers alongside their brand-new PS5s. No cross-gen multiplayer with the PS4 version also adds to the uphill trajectory that is Sackboy’s Big Adventure – going from boring to genuinely engaging takes a lot longer without company.

It’s clear that with the slow pace it’s a game better suited to a group of Sackboys running about each level before the inevitable ramping up of challenge and pace makes it engaging to tackle solo. There’s a story here, one featuring a big bad offering a toy-time glimpse at a potential Abe’s Odyssey journey to save a bunch of yarn slaves, but it mostly sits and simmers in the background. Instead the different worlds and stages carry the brunt of the immersion, presenting a compilation of hits and style as Sackboy’s quest progresses. 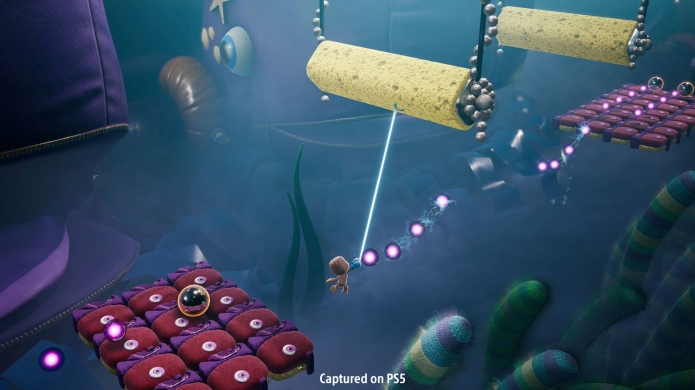 The compilation comparison is one that grabs you immediately too, on the account of the licensed music, covers, and original pieces scattered throughout Sackboy: A Big Adventure being something of a treasure trove of funk, house, pop, and disco. From an on-rails stage set to the sublime scope of The Chemical Brothers ‘Private Psychedelic Reel’ to a pop party set to Bruno Mars singing ‘Uptown Funk’ to an instrumental cover of Madonna’s ‘Material Girl’ set in a dreamy underwater locale – the interplay between music and level design regularly borders on genius.

Music plays such an important role that several obstacles and puzzles and platforming challenges are even timed to progress with each new song or random bit of UK electronic goodness. At a certain point the levels ramp up in complexity, matched by inventive level design and the introduction of new mechanics like jet boots for the space-world or a grappling hook that’s a household sponge away from becoming a rope-swing. With great music there from the beginning, it’s only when the levels and mechanics and set pieces rise to the same level that Sackboy: A Big Adventure begins to shine. 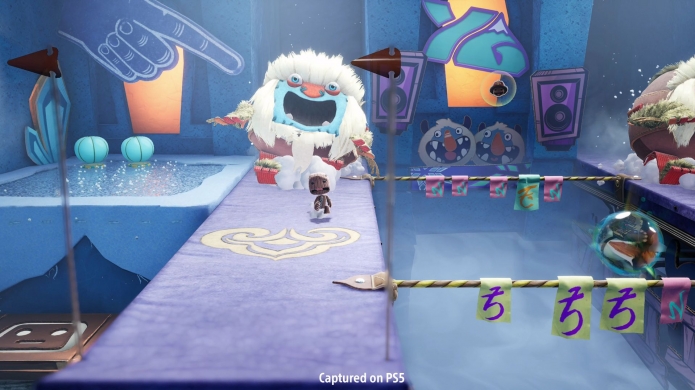 On the topic of shiny stuff, Sackboy: A Big Adventure is beautiful and the added power of the PlayStation 5 hardware has led to the materials found throughout the arts-and-craft world to look and often behave like the real thing. The blend of fantasy with everyday objects gels wonderfully with the soundtrack too, giving the experience a feel that is more than a simple riff on classic 3D platforming.

The licensed music, covers, and original pieces scattered throughout Sackboy: A Big Adventure is a treasure trove of funk, house, pop, and disco.


As a launch title for the PlayStation 5, Sackboy: A Big Adventure is overshadowed by another first-party platformer – pack-in title Astro’s Playroom. An experience that we were half-expecting to be nothing more than a simple tech demo for the new DualSense controller. As it turns it’s a solid little adventure that left us wanting for a more full-sized Astro game in the future. And with Sackboy’s subtle use of the DualSense controller – outside of the borderline horrific death screams of Sackboy when you fall off a ledge that come through the speaker – it feels more like a cross-gen title than something designed to take advantage of next-gen hardware.
Follow Us
Latest Reviews
More...
News Feed
Advertisement
Latest Threads
Log In
Create Account | Lost your password?