Shaking up the MMORPG market at the moment is a little of a David Vs Goliath case, only unlike David, the little guys in this scenario aren't necessarily aware of any weak spots on the giant. Blizzard have cornered the market like no one else, and while it's arguable they [Blizzard] did so through a great pay as you play system that sees regular updates and copious amounts of support, it hasn't stopped a lot of smaller companies feeling crushed and overshadowed in their attempts to take a slice of the pie.

It seems then, one of the only ways to attempt to make any impact in this field is in the free to play realm, which is exactly what Taiwanese development studio, Runewaker Entertainment and their publisher, Frogster, have done.

Runes of Magic is a free to play MMO that closely follows much of the development manifest of World of WarCraft (hey, imitation is the highest form of flattery, remember). In fact, it homages that game down to artwork load-screens (among so much more), and it makes no attempt to hide this. But whether or not this is an intentional level of imitation (you know, out of flattery), or a desire to cash in on the success of WoW, it stands as something of a constant benchmark - especially for those of us who've ever been sucked into World of WarCraft's crack-dealing like vice grip before. 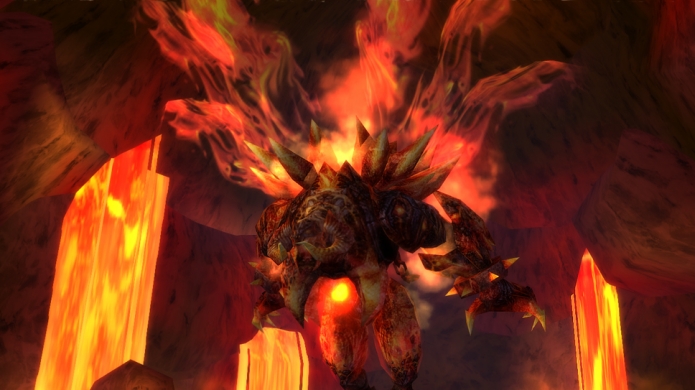 Getting started with RoM is a fairly painless affair. You pretty much download the client (available here from AusGamers), update the game then jump on in. As mentioned, this is a free to play MMO, and the only time any money really leaves your wallet (or credit card), is when you desperately need to dress your character up in something aesthetic. There are items to buy if you're a lazy grinder, but ultimately, if you play MMOs to get the most out of what they have on offer, you can essentially kit yourself out with some pretty awesome equipment without ever draining your bank account.

There are six classes to choose from when creating your character: warrior, mage, priest, rogue, scout and knight. Being the goody-two-shoes that I am, I created a blue-haired, heavily bearded knight character with Pop-Eye-sized forearms and little legs.

Creating your character is very much the same as in WoW, which in itself is a simplified task, so you're not going to feel lost if this winds up being your first foray into the realm of forgotten online playing souls.

Getting started is essentially a series of fetch quests; telling people you're ready for the hard yards and so on. I immediately felt there was a lack of atmosphere - music seemed dulled and lost, almost as if the devs didn't know what tunes they should be playing. And while the sound effects throughout do their job, it all really seems a bit half-assed.

Still, despite that, the game-engine running things is fairly decent. At least, you're getting what you pay for, and considering you're paying for nothing with Runes of Magic, a competent engine that renders everything decently is all you could really ask for.

You're not going to find insane amounts of detail, so if you've just come from the crunching Age of Conan, don't expect anything near that game's quality. Moreover, the visual style, in keeping with the aforementioned WoW love is very much Blizzard-inspired (only not nearly as completely realised though). You'll find critters similar too, or inspired from those in Blizzard's fantasy universe. And it's not as though the Blizzard stuff is overly original, either. It's just they have a particular look, and here, Runes follows suit pretty closely.

So what's different about it then? Well, once you hit level 10 you're awarded a sub class that can be switched to be your main class whenever you like. This works quite well because you might find yourself, as a priest, having your ass handed to you constantly, so you can back your play with the warrior class to tank it up a bit, then it's up to you to level them in whatever fashion you choose. It is important to remember you can only level up your main class though, so if you tend to run around more specifically as one class, your sub class is going to suffer.

There are other elements too. Such as being given a mount right out of the box. And if you didn't buy the game (you can, you know), you can still try one for a day. At least this way you're not left gawking at all the other uber-classes riding around on their fancy panthers while you run about in your recently acquired leather tunic.

What's equally different about Runes of Magic is you're allotted one side. There's no Alliance or Horde, everyone in the game-world is essentially fighting for the same cause. This obviously gives the game a much smaller scope, but also allows the development team to focus on the world of Taborea as a single map (which is actually quite big), expanding quest lines and the like ten-fold.

There are also guild and player incentives, such as being able to furnish your lodgings how you see fit. But for the most part, elements such as this are all aesthetic and cater to the more specifically hardcore of the MMO players out there.

Runes of Magic is definitely a capable entrant into this dominated genre. It has decent technology running it which really doesn't cost you anything, so it's not a huge loss the game looks dated, and the bells and whistles you'd expect with this type of game are completely intact. It's just a bit smaller in scope, and as a result might not appeal to some.

Beyond that, you could be turned off by the clear parallel in design, presentation and visual direction to World of WarCraft, but hey what's wrong with having heroes. Ultimately, this is a free MMO and it holds its own as a result - just don't go expecting anything utterly life-changing or genre expanding.