The rogue-lite as a genre is something that is slowly becoming as synonymous as the metroidvania, in terms of flow and high profile indie releases. That sort of experience where dying is a key part of progression and it's all about using a bunch of systems and RPG-like mechanics to grow in power over time. What was once seemingly impossible, becomes possible.

Rogue Legacy 2, arriving so many years after the 2013 original, presents an additional layer on top of it being a rogue-lite through and through. And that layer comes from the fact that the original Rogue Legacy got us to where we are today, it introduced the whole rogue-lite framework as a riff on punishing ‘rogue’ games. Where it was all about one-life one-chance.

Rogue Legacy became an instant cult favourite, and paved the way for the (rogue) likes of Dead Cells and the peerless Hades, which took the somewhat simple framework of the rogue-lite laid out by Rogue Legacy and introduced a more skill and choice-driven approach to growing in power. Hades in particular introduced a complex narrative that played into its whole complex structure, and in such a way that it’s hard not to think of it as the benchmark for the genre-within-a-genre going forward.

"Rogue Legacy 2, arriving so many years after the 2014 original, presents an additional layer on top of it being a rogue-lite through and through. And that layer comes from the fact that the original Rogue Legacy got us to where we are today."


The fact that you can see shades of Dead Cells and Hades throughout Rogue Legacy 2 is a wonderful thing, because it all sits on top of the core experience found in the original. Where your Heir (see: next life) can spawn with a random class, random abilities and often humorous attributes. Vertigo as an example offers up a massive boost to Gold (the primary upgrade currency) at the cost of playing that run from an upside-down perspective.

Everything here is expanded and evolved in such a way as to feel definitive, classes are more diverse and robust in their playstyles, skills and magical abilities feel more pronounced and can drastically change both how you approach a situation and how successful you may be. Those humorous attributes have been ramped up too, though much like with the original can be ignored for a more traditional hack-and-slash feel. Though, taking on the role of a budding musician and using the power of music to destroy projectiles is as fun as it is awesome.

Underneath it all is a world bigger and more expansive, with each region feeling like its own distinct biome, with its own set of platforming rules and threats to go up against. Relics as in-run power-ups to choose from, offer buffs that sit in the risk-reward category. The Rune system is basically a way in which to offer-up game-wide perks covering everything from life-steal through to adding an additional jump to the prerequisite double jump. There’s also challenge rooms, quests, secrets aplenty, and strange obstacles to overcome.

Perhaps the biggest change or evolution compared to the original Rogue Legacy comes with how Cellar Door has tied upgrades, new abilities, and everything else mentioned above to lore and the rich and mysterious castle setting. A nod to Hades for sure, and probably not as well executed when all is said and done, but it helps deliver a meatier, lengthier, and more rewarding experience than the first outing.

"Everything here is expanded and evolved in such a way as to feel definitive, classes are more diverse and robust in their playstyles, skills and magical abilities feel more pronounced and can drastically change both how you approach a situation and how successful you may be."

But, there is a price that comes with complexity, one that’s weirdly enough, tied to the very nature of Rogue Legacy’s more simple progression. Where for a price that increases over time, you can buff a stat, your damage, your vitality, and a long list of other attributes between runs. There’s a point, and this will depend on when you hit a particular challenge wall, where upgrades do begin to feel too expensive. And the rewards don’t present anything more than an incremental boost. Coupled with the more robust class and skill system, it doesn’t quite match the balance found in the likes of Dead Cells or Hades, where it never felt like you were a dozen or so or more runs away from taking that next step. From defeating the next boss. 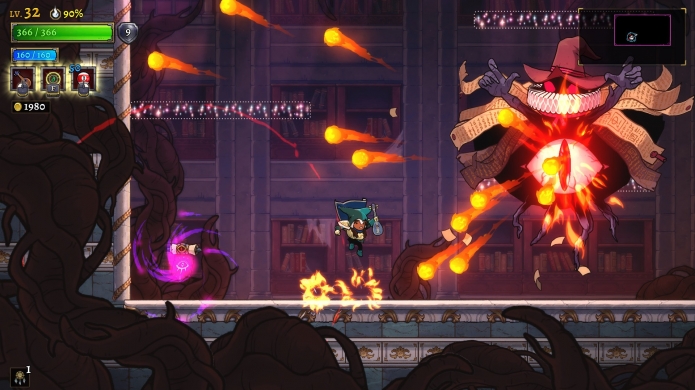 Here the increase in enemy damage, health, and challenge between the different sections of the castle is pronounced to the point where upgrades trump skill. Thanks in part to a lengthy Early Access period there are additional systems in-place, like the House Rules tab that lets you adjust damage scaling, but it still feels a little too grind-y. Especially when multiple runs and New Game+ completions expand the story, there’s a huge chunk of time where all you’re doing is chipping away and collecting gold for upgrades.

The flip-side to this is a positive, in that Rogue Legacy’s intricate progression and many, many secrets to discover is enough to warrant on and off play for weeks and months. If you’re after a pure rogue-lite experience and something that has the combat depth and platforming challenge to keep you hooked on its loop for an extended period, then Rogue Legacy 2 is a resounding success. Visually, it's a huge leap forward over the original too - with some fantastic animation and responsive 2D action.

All in all this is a sequel that builds on the original in impressive ways, and a timely reminder of why the rogue-lite genre has taken off in the way that it has.
Latest Comments
No comments currently exist. Be the first to comment!
Follow Us
Latest Reviews
More...
News Feed
Advertisement
Latest Threads
Log In
Create Account | Lost your password?