The first thing that struck me when playing Resident Evil 4 for the first time was the freedom of movement within a 3D environment. Sure you had polygonal characters shuffling through “3D” corridors and courtyards in the first few games, but it was all smoke and mirrors. Bitmap backdrops without so much as a flailing cloth animation (in the original originals) to let you know you were somewhere real, still managed to scare the pants off you thanks to an attention to artistic detail that should never be understated.

On the original PlayStation, Capcom found their beyond Street Fighter II groove, and it was a scary one indeed.

So when Resi 4 dropped us into a cold autumn-ravaged forest in Europe, and it was apparent the immediate game-world and environment were open to you, it was like a breathe of fresh-air; a sense of movement for the series that broke down those static bitmapped walls with open vistas as far as the eye, and terrain, would let us see. 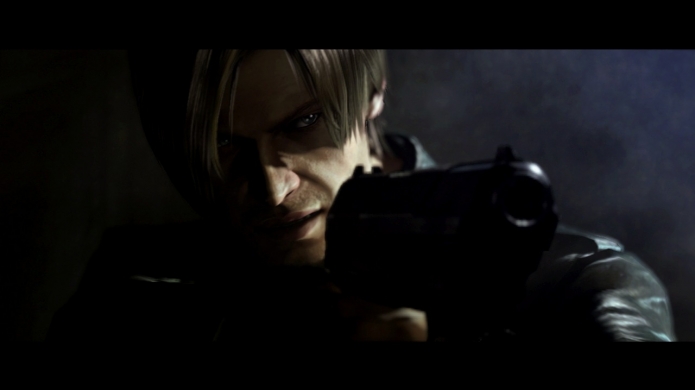 The camera was now free to move around our hunky protagonist, Leon S. Kennedy in full 360 degrees and yet the game had barely lost any of that artistic charm or attention to detail. Back in the day, on GameCube first and PS2 second, Resident Evil 4 was something of a graphical benchmark.

Yet despite all of the freedom of movement or the series’ massive leap into a brave new visual world, Resident Evil 4 won out because it paced and balanced everything within its seemingly unconfined walls to perfection. Contextual action performed at a single button-press, gruesome deaths, varying enemy-types with ever-scaling difficulty, a weapon upgrade and purchase system second-to-none and bosses the industry should still be in awe of, were only a handful of what made this game amazing, and it amazes me that in the (almost) eight years that have passed since its release, Capcom has yet to trump its brilliance.

Now this could be a good place to finally lay that Capcom demon to rest; to tell you they’ve finally matched Mikami’s genius with Resident Evil 6, but if I did that I’d be lying. Instead, what the team has done is pack their product with so much, they hope you won’t notice that as far as propelling the series and its gameplay design into another new, modern era, they have no idea what they’re doing.

This isn’t to say Resident Evil 6 isn’t a worthy entry in the franchise, or a game you shouldn’t play, because as mentioned above it packs features in up the wazoo and the team’s story-telling capabilities are absolutely top-notch, if you like watching lengthy (and sometimes intrusive), well-directed cut-scenes. The larger problem stems from archaic design in certain aspects that need to be brought into a modern gamer-driven world. Players are used to incrementally progressive design with every new game, and while there are titles that homage classic videogames with nostalgic applause, in the slickly presented Resident Evil 6, they simply have no place. 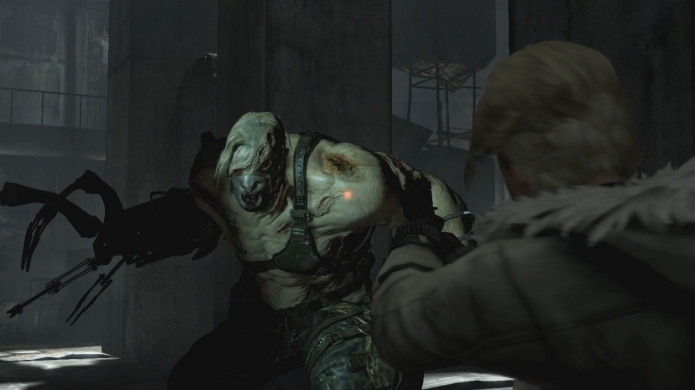 Again, I won’t skirt around what the game offers: four deep campaigns starring series stalwarts, all with a different theme and vibe, and all of which intertwine to tell an overall epic tale. Ever-varying enemies and enemy-types as well as a handful of impressive, multi-levelled bosses. An upgrade system that allows for character ability progression in a number of different areas to cater for unique play-styles. Full campaign-by-campaign co-op with a competitive edge. An unlockable multiplayer mode that pits players against zombie and enemies equally driven by other players. Interesting and twisted puzzles both from the modern age and some lifted directly from the series’ roots. And collectibles, oh-so-many collectibles.

The bigger problem with 6 is that the meat of the game is simply flawed on so many levels. The UI is clumsy and annoying to work through, and while it’s a great idea to have it presented differently for each character, Resi 4 and 5’s classic weapons cache system would have worked better. Managing your health is a two and three-step process at the best and worst of times, whereas in a game like Dead Space, for example, it’s as simple as a single button throughout the entire experience.

There’s also a huge issue with crowd-control, which is a big part of the conflict component of Resident Evil 6. Playing solo has merits for the story lovers out here, but your AI partner isn't as necessarily fast as a human in the response department, and their actions can negate what you'd normally ask a people player to do. Moreover, their AI is set to leaping to your aide the second you’re knocked on your can (which can happen a lot during the thick of it), however, this means that any zombies still standing in your immediate area will flock and hover around you so that when you’re finally in control, there’s a pretty good chance they’ll have the upper-hand and simply kick your ass again.

This is a two-part problem, because you have a timer for being healed by the other player when you’re knocked down, so there’s time to crowd-control for a safer resuscitation situation, but even getting to your feet with enough breathing room for a moment doesn’t help, because any melee attacks you use to further the distance between yourself and the enemy is like a kitten batting a ball of wool - there’s really an impact to get any enemies off your back, and given you can’t fire from the hip, the time it takes to take aim just isn’t enough. All of this is especially bad on the harder difficulties too, as Health comes in dribs and drabs (or not at all), which usually means death which means uber-frustration. 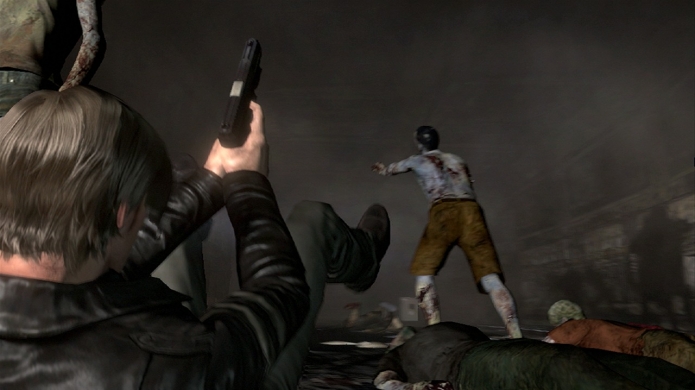 In fact, on the Professional difficulty level the game feels unfairly hard, where two or two and a half attacks will kill you easily, and pick-ups are almost exclusively ammo and skill points. In the previous games, ammo was the scarcity, and here, with your melee abilities and a teammate, it feels like a missed opportunity to have the player rely more on ammo conservation or their up-close-and-personal fists and feet of fury than just having them running scared that three zombie swipes means annoying death (and subsequent Checkpoint restart).

Moreover, the game doesn't actually pause, which is likely a device to help build tension, but when you can be low on health and barely managing to evade zombies (while being as tactical as possible), there's nothing more frustrating than triggering an in-game controlled camera sequence (often showing objective points or highlighting certain enemies) or a cut-scene, only to have it snap back to you being munched on by a zombie, or worse.

The game also feels slightly cheapened by the skills system. It's old and archaic by nature, and further evidence the Japanese development community is stuck in the past with many portions of game design. That being said, it was a welcome omission from Resident Evil 4 which still managed to maintain old-school gaming (weapon purchases, the shooting gallery and treasure-hunting), while ushering the Resident Evil franchise, and action games in general, into the modern era. Again, that this is the second full Resi title since then, and nearly eight years on speaks volumes of just how far out this franchise is from a serious overhaul.

But I digress. Skills are purchased at the end of each Chapter through the collected Skill Points enemy drops or crate and barrel break-ins you accrue on your way. You can choose to spend them on tiered upgrades ranging from Melee and Defense, to Critical Hit, Firearm, Lock-On and more. The rub with this though, is you can only choose three to have active at any given time, which does add a decent level of balance and trade-off. It's a fairly lite RPG addition to the game and lacks any sense of dynamism or even really holds a place in the tale, from a contextual point-of-view. 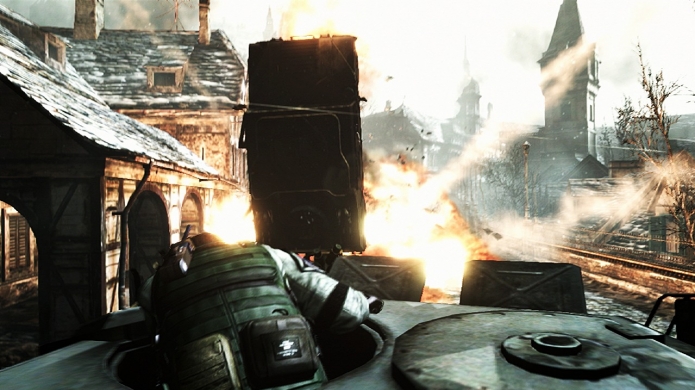 However, it will be a way for players to express their play-styles with each character, and given the online nature of the game, could see some decent skill crossovers, depending on your partner's chosen areas of improvement.

I also really need to mention the menu sounds, if only to voice how annoying it is that it sounds like so many other J-developed games from the past 15 years (in fact Soul Calibur comes to mind). Basically this sort of thing pulls the player out of the experience (one that is meant to be built around tension, I might add), by breaking any of the suspension of disbelief. The best example of incorporating character management and growth in-game is Dead Space, a horror game that took the Resident Evil foundation and ushered it into the new. How the team hasn't looked at all the elements that make Visceral's effort stand-out is beyond me.

Splitting the experience across different characters, despite all of the above, is the game’s biggest redeeming feature, and both Ada Wong and Leon’s campaigns, specifically, are the closest the game gets to capitalising on the Resi 4 legacy and tapping into both story-rich personalities. Jake, as the newcomer, is also a very welcome addition, and his steely staunch attitude to self-preservation is a nice offset to both Chris and Leon, who are the ultimate in good in the series. Unfortunately Chris’ campaign is the weakest of the four through its steroid approach to high-action. What results with simply having more “run-and-gun” here is a clunky experience at best where, despite some great bad-guys to face off against, his skill-set and the chapter pacing throughout just don’t gel with the game’s base mechanics.

Still, if you can push yourself through all four campaigns, either solo, or with others, you’re in for a pretty excellent story that not only opens new and interesting ideas for future narrative jump-off points, but also closes some out, too. 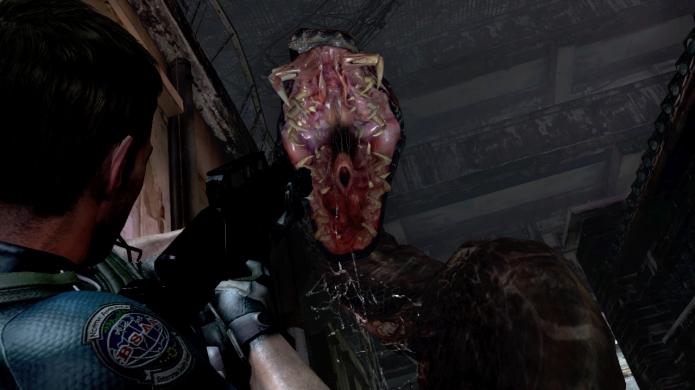 Visually the game impresses, and the team has used MT Framework to its fullest. The environments are all stylishly handled and stand-outs come in the likes of a rain-soaked cemetery at night, the interiors of a creepy castle and some of the hillside vistas you’ll see at the beginning of Jake’s journey. I’d argue that character movement feels a little binary (with only run or walk, and nothing really in between), but coming off a fluid third-person outing like Batman: Arkham City, or even the exampled Dead Space, it’s more glaring than it might usually be.

Though that being said, no excuses should be made for Resident Evil 6’s lack of modern game design. Examples of truly progressive development are out there right now, and it shows that the team can’t look beyond their own heritage for influence, much to the detriment of their own product. The game’s slick presentation, stunning visuals and incredible cut-scenes don’t help its lack of dynamic or compelling gameplay. Being forced to watch every cut-scene whenever you die and restart a Checkpoint is just the tip of the frustration iceberg, much of which I’ve already explained above, but is a perfect example of what you’re in for when you sign into any character campaign. At the end of the day, Resident Evil 6 is packed to the gills with features and absolutely looks the part, no one can deny that, but its lack of gameplay identity leaves it as empty and vacuous as the higher brain function of any one of its zombie inhabitants.