Redeemer leaves a great first impression, a feeling of visiting an arcade circa the early ‘90s and putting a few minutes and a couple of gold coins into a cabinet featuring Final Fight or Double Dragon II. It’s an over-the-top, violent old-school brawler where enemies rush you and you need to punch and kick back with a combination of light and heavy attacks. Played from a top-down perspective the viewpoint adds a modern indie aesthetic, but at its core Redeemer is all about action. And there’s plenty of that to be found.

Coming from Russian studio Sobaka Studio, it’s also quite the looker - having been built using Unreal Engine 4 with settings that scale well across different types of hardware. Strangely though, playing on anything other than the highest settings gives the game a somewhat blurry look. A soft-focus more suitable for daytime TV. Starring an angry bald dude out for revenge. 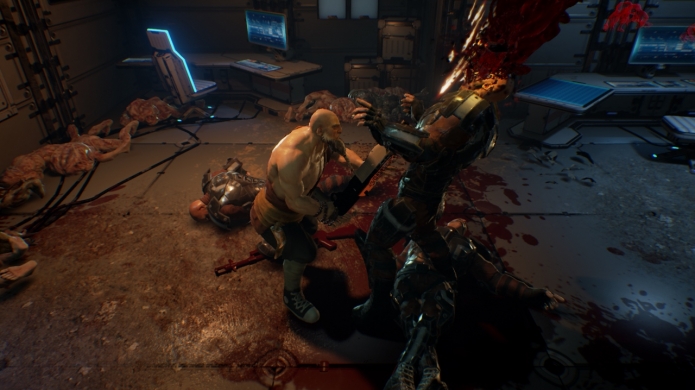 Taking on the role of an ex-military special forces type, who’s now living in a monastery, things quickly devolve from the peaceful introduction to becomes a tale of vengeance and fighting both human and mutant enemies across several thematic levels. The arcade brawler comparison drawn in the introduction to this review certainly fits, with the progression and minimal story split into different levels with different enemies that reflect the current state of events.

And much like in a noisy arcade, you’ll be hard pressed to play close attention to what’s going on whilst dispatching any number of bad guys and bad, err, things.

Thankfully, Redeemer isn’t merely a throwback to a certain style of game. The combat also borrows the blocking and counter mechanics from the Batman Arkham series, whilst introducing both melee and projectile weapons that either degrade or deplete from repeated use. Throw in environmental takedowns, some light stealth, and boss encounters, and Redeemer shines bright in its opening hour or so as each new mechanic is introduced.

It’s only when you venture into the steely industrial settings that things begin to feel a little padded. 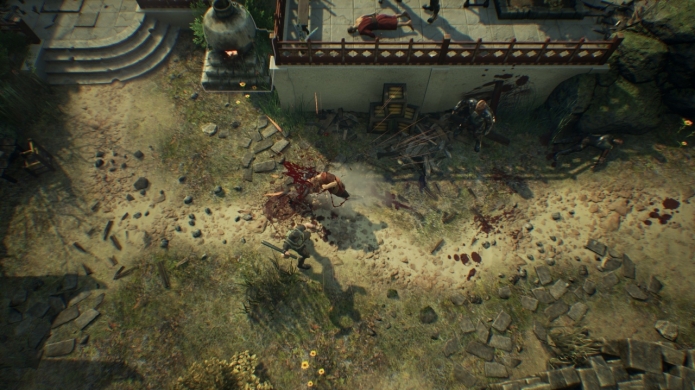 It’s here where the increased difficulty paves the way for less of a focus on strict combat and more on trying to preserve different melee weapons, shotguns, and assault rifles for the right type of enemy. Also, it’s at about the halfway mark that the level design begins to feel like a string of corridors and large open areas as opposed to anything as inventive or visually distinct as the first three or four locations. This is a problem that has plagued brawlers for decades, where the opening and closing moments are the most memorable – with everything in between being a little ‘meh’. Or, average.

That’s not to say that Redeemer is a bad game, as the combat mechanics feel great. The challenge rarely if ever enters the realm of cheap, and the violent way in which you can use different melee weapons and guns offers a sizable dose of variety. Blows have impact, and putting a mutant through a wall has the right amount of crunch and gore. As does taking a sledgehammer to an unsuspecting foe. Encounters with larger groups of enemies can often result in some light planning, where observing all the different options leads to a fluid and impressive sequence of balletic carnage. 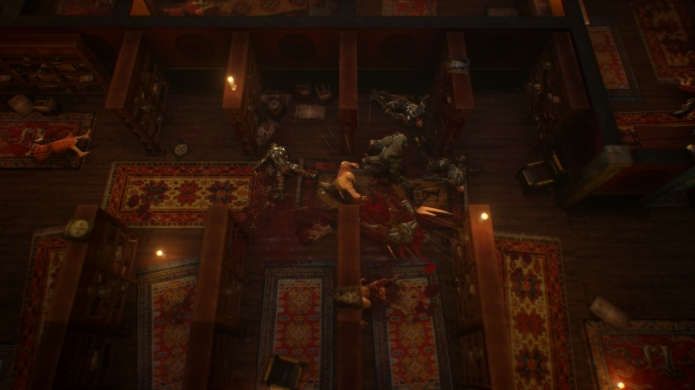 But, as a pure action-brawler Redeemer’s appeal is limited. Like the classic arcade game Double Dragon II there’s a sense of fatigue that becomes hard to shake after a few hours, something that very few games in this genre manage to overcome. But, if you’re a fan of punching things and stringing together combos and takedowns in a violent action game, then there’s a lot to like here. Any hey, any game where you can, mid-combo, rip the arm off a mutant and then proceed to beat it to a pulp with both severity and a severed appendage -- is worth checking out.