West, meet East. East, meet West. Think Sergio Leone crossed with Takeshi Miike and you'll immediately understand the premise and direction for Ubisoft's pseudo sequel to Red Steel. More a re-imagining, Red Steel 2 takes the FPS and swordplay action of the original and ups the ante, with a greatly improved control set-up; allowing a seamless blend between gunslinging and the way of the warrior. Red Steel 2 offers the player an uber cool amalgamation of spaghetti western and samurai sensibilities that are fused with a modern, albeit robotic Japan. The art direction in this game is stand-out for a Wii title, and with Wii MotionPlus comes much more accurate and responsive sword movements, creating an original and fun title to play.

As expected you take on the role of a hero, one of the last members of the Kusagari clan. The game takes place in a fictional town called Caldera, situated in the baron Nevada desert. Following a cool opening sequence beginning with a POV of you being dragged around via rope to the back of a motorbike by a member of the Jackals gang. Once the gameplay begins you proceed to regain your sword, investigate the missing members of the Kusugari clan, and reap vengeance on who, or whatever, stands in your way. 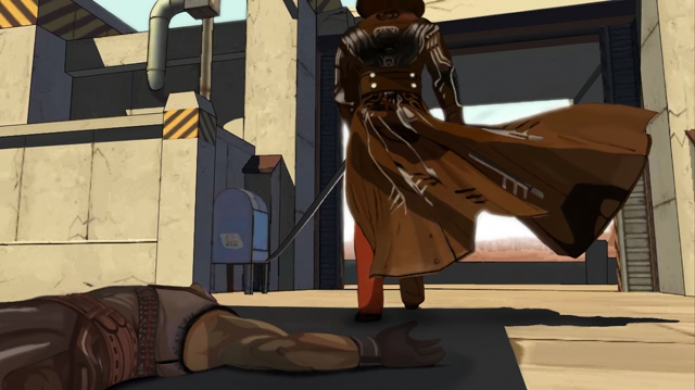 You earn cash by completing missions, destroying environmental objects such as perfectly realised Japanese style vending machines, and collecting hidden tokens, allowing you to purchase new weapons, sword upgrades and scrolls containing new special katana moves. Many of these moves when executed at the correct time give you finishing multipliers boosting the amount of cash you receive for each kill.

We all know Wii's lo-res 480p graphics often fail to deliver, however, Ubisoft have managed to create some of the better looking visuals and stylised imagery seen on Wii and surprisingly, all running incredibly smoothly with no lag in sight. Opting for Borderlands style cel-shaded graphics, with comic style shadows and outlines, Wii's lack of graphical prowess is cleverly hidden. The game's overall presentation and visual style really is incredible. The main character design is great and the attention to detail in the environment design is spot on. Scattered amongst ye olde western wooden buildings are accurately depicted Japanese style vending machines, phone booths, towering temples, and compact apartment buildings. Whilst a lot of effort appears to have been implemented in an attempt to create original and different environments, they can appear a little repetitive at times.

Having a great soundtrack is paramount to a game's overall immersive experience and as there's no doubting this game is a homage to Sergio Leone's westerns, the score successfully channels the familiar haunting tones of Ennio Morricone's famed soundtracks. The voice acting of main characters is decent enough and sits the game's setting fairly well. 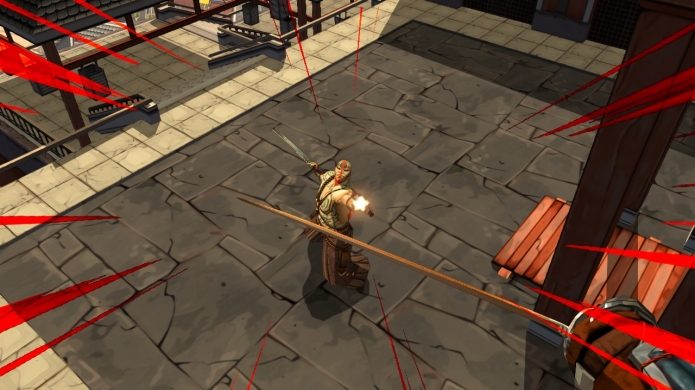 Thanks to the MotionPlus accessory (required to play), Ubisoft have been able to rectify the control problems that plagued the original. Movement is smooth and quick and functions similar to Metroid Prime 2: Echoes; Strafe and traverse using the Nunchuk and utilise your Wii Remote for aiming, slashing, jabbing and shooting. A brilliant job has been done of creating a believable control set-up that really feels like you are harbouring a samurai sword in a three dimensional environment. Kudos Ubisoft. Be prepared for a workout though.

Unfortunately it's not the sort of game to sit down with as there's too much swinging going on. With multiple levels of swing strengths, a simple flick of the wrist is not enough to trigger strong slashes. Once you've completed the constant training exercises to learn the strengths needed you can implement special moves all revolving around combinations of exact timing, slashing direction and button pushing. Parrying enemy attacks depends on the direction they swing from and you need to adjust your blocking angle accordingly and the same applies when you're on the offensive. Clever implementations such as safe cracking, requiring you to hold the Wii Remote to your ear and turn ala a safe dial until you hear the faint click of the lock, are a welcome addition.

The game takes a decent amount of time to complete, with plenty of side missions to partake in and secret areas and collectibles to find. You're also offered the option to replay completed levels in a challenge mode rating your performance on how much cash you collect. 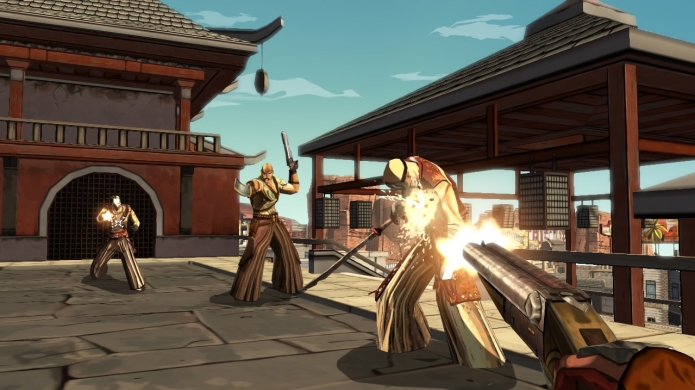 Unfortunately Red Steel 2 just a little too easy. Having only died a handful of times whilst completing the game I found the amount of power you can achieve quite early on means you can pretty much run in and destroy anything - including bosses - if you swing hard and fast enough, and without giving it much thought. Swing too hard sometimes though and the system seems to become confused resulting in jabbing or the like, instead of swinging. You just can't be as gung-ho as you would probably like to be. My other big gripe is the extremely lazy addition of badly digitised live-action video of a girl essentially explaining the necessary movements of the Wii Remote. It looks like they took video footage of their friend on an old mobile, uploaded the footage to YouTube then downloaded the .flv file and inserted it into the game. Seriously. When the game's overall presentation is so good, a little element like this really stands out and just shouldn't happen.

Ultimately Red Steel 2 is a great Wii game. Solid presentation. Great graphics (for a Wii title). Sturdy story concept and an effectively implemented swordplay/gunslinging control set-up all result in an enjoyable experience. It's a little too easy and the decision to not include blood (it looks like sand instead) takes away a little from creating a true western/samurai experience. Some might also get frustrated with the need to move so much whilst playing an FPS but if you're up for an active and original FPS experience on Wii, this is your thing.