In Double Fine’s RAD, a cute 80s celebratory roguelike, you collect 5 ½” floppy discs as keys to the game’s myriad chests and locked doors. My son, a near eight year-old who was born in 2012, asked what they were given the game’s narrator exclaims “floppy” in a booming voice every time you collect one. I then had to explain that computers used to use disks like these and he asked “how long ago was that? Must have been in the early 2000s”. When I tried to tell him how old PC technology actually was, his interest waned and he complained about the repetitive synth music and exclaimed, authoritatively that “no one says the words ‘rad’, Dad”. 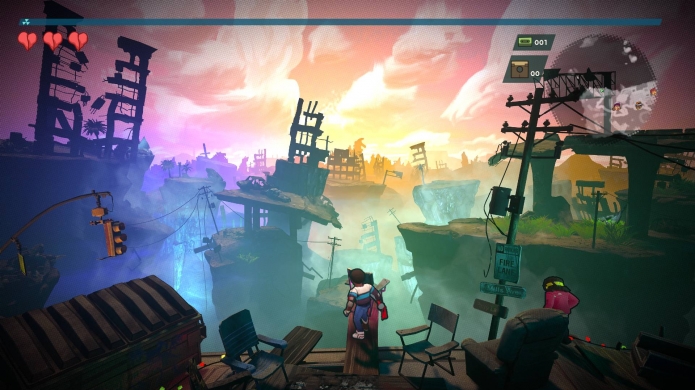 “Yeah, but you’re old,” he said before heading back to his room to watch a Minecraft YouTuber be typically annoying while emphatically yelling into his webcam about Minecraft sheep. Or something.

"And maybe that statement above is a leading way to explain my love of RAD. Because RAD is truly rad and its unashamed love affair and exploitation of the 80s is as infectious as the mutations you gain..."


That’s not to say he doesn’t love games, or geek culture. And as my hand ran through my hair, unceremoniously flicking away more casualties from a once glorious cranial empire in alarmed elderly frustration (with some white ones, too,) I realised for the first time that here was a young person with no actual attachment to the 80s; knowing almost nothing about the nods his little cartoons like Teen Titans, Regular Show, The Amazing World of Gumball or even We Bare Bears throw out in their excellent writings (or in any of the other shows who use the period as inspiration still). And that’s not even a mild piece of shade against the fact he currently consumes Stranger Things like so many Sunnyboys on a hot summer’s day. I almost didn’t have the heart to remind him his favourite actor, Arnie, was most popular for his work from the 80s. I mean, the excellent hair-dos, parachute pants and neon synthwave soundtracks against so many purple haze afternoons... he just won’t ever have a truly grounded attachment to perhaps the greatest era humans ever lived through.

And maybe that statement above is a leading way to explain my love of RAD. Because RAD is truly rad and its unashamed love affair and exploitation of the 80s is as infectious as the mutations you gain to power your way through the game’s procedurally-generated post-apocalyptic wastelands.

RAD sees players choosing from a number of teenage avatars, all inspired by 80s aesthetics, though each avatar is essentially an empty vessel. You start the game in a village you’re able to upgrade through interactions with a few NPCs, and this is effectively the only permanent part of the game. Each visit into the various wasteland ‘levels’ is a ‘run’, where upon death everything resets and you start all over again. The game’s main currency is tapes (read: more 80s awesomeness) and each new run resets your collection of them, unless at the end of each run you choose not to move on to the next world, and return to your village where you can bank your current collection of tapes. These then become available through ATMs in subsequent runs, meaning your first few forays into the game should essentially be shallow tape-gathering runs in an effort to build on your available currency.

"In the overworld portion of the game, you’re basically tasked with activating ancient Easter Island-esque statues that “open the way forward” where you enter a small arena and take on a collection of bosses..."


Tapes are used to buy upgrades, health and mutations. Mutations are the game’s major powers, and you can have up to three active mutations at any given time, with a further five passive mutations available. You gain these through the aforementioned purchases or through visits into the game’s steely ‘dungeons’. In the overworld portion of the game, you’re basically tasked with activating ancient Easter Island-esque statues that “open the way forward” where you enter a small arena and take on a collection of bosses. If you’re successful, you get to either go back to your village as mentioned before, or move on to the next world, with harder enemies, more secrets and even harder bosses. You also upgrade to have more health and newer mutations.

And that’s essentially how the game plays. As already stated, it’s a basic roguelike. Now, where the game shines most is in its collective balance of enemies and powers, and how combinations of mutations can set you up for success, failure or, importantly, stability. That third point is more relevant for players who see the longer game ahead of them -- upgrading your village, unlocking new items and essentially setting yourself up for hours-long runs in repetitive landscapes with like-for-like enemies and systems. I’m not usually a roguelike person, but how Double Fine has balanced all of this is infectious. And the additional radness of it all is in how the whole thing is presented -- I won’t lie, this is pure 80s, and if you have any affiliation or love of the era, it’s almost impossible to look past.

"And being a roguelike, getting some five or six worlds in, only to unceremoniously die and have to start all over again can get tiring..."


The game itself isn’t without a few flaws though. You’re better off taking on each world with ranged attacks over melee, for example, which leaves the random nature of mutations and drops all the more frustrating if they don’t work in your favour. Pickups don’t tend to register as quickly as they should, and in heated all-in attacks that can be the difference between death and escape. And being a roguelike, getting some five or six worlds in, only to unceremoniously die and have to start all over again can get tiring. And sure, that’s the nature of the genre, but it would have been awesome for the game to periodically send you home for village upgrades and a basic rest, but that might just me being a whinger -- a tag I’m all-too happy to bear given these types of games aren’t always my thing.

There’s a genuine franchise-in-waiting in RAD, but I fear its soft launch and lack of any major marketing, plus its niche setting might see it living out in the wastelands it so expertly portrays. Maybe, however, with Cyberpunk 2077 on its way and with a renewed focus on all things neon, synth and radical, RAD might find a dedicated market. And if I’m Microsoft who now owns Double Fine (and unfortunately I’m not), I’m looking at this gem with nostalgic yet forward all-seeing eyes, and just how far RAD could actually go.