I sometimes worry that no one cares about words the way I do anymore. Restaurant menus offer up “pizza’s” and “pasta’s”. Forum users assure others that their ideas are “genious”. Nobody seems to know the difference between “your” and “you’re”. Who should I blame for this? The school system? Facebook? Society in general? Who can say for sure? All I know is that the world would probably be a better place if we all treated words with the same reverence Quarrel does.

Originally released for iOS last year, Quarrel has been described by every single person who played it as “Risk meets Scrabble”, which is about as apt as descriptions come. Between two and four players start each round with troops positioned across territories on what is essentially a game board. You start with between four and six troops in each of your territories, and you take it in turns to either swap troops between adjacent territories or attack enemy territories. Once you attack, the Scrabble aspect of the game comes into play. Both you and your opponent are given the same eight tiles, and it’s up to you to make a word out of them. 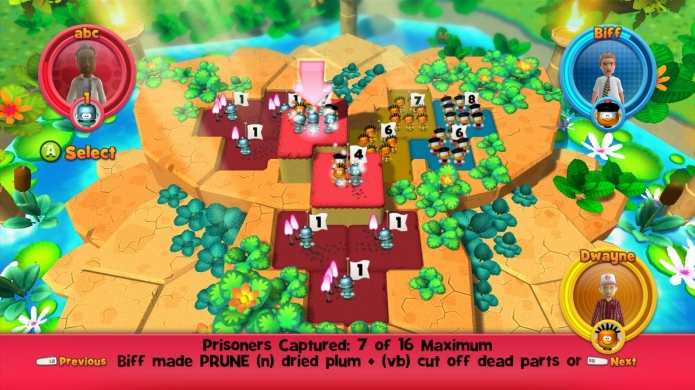 The harder a letter is to use, the more points you can score with it, and you can only use as many letters as you have troops in that territory. Win the round on your turn, and you take your opponent’s square, as well as a few prisoners if they had more troops than you. At the end of each of your turns you receive back-up troops on all territories – the more wins you just chained together, the more back-up arrives.

The best part of this whole system is that luck has almost nothing to do with it once you’re squaring off. You both have the exact same letters, and if you’re facing an opponent with far more troops than you, it means you haven’t been playing strategically. Unfortunately, in a four-player game the person who goes last is at a bit of a disadvantage – you can only capture territories on your turn, so if you get attacked you can defend yourself but you’ll gain no ground. You can still take out enemy troops and gain prisoners, leaving your opponents much worse off for when your turn rolls around, but lose a few early quarrels and you may well be in no real position to launch a comeback by the time your first turn rolls around. Still, this is a near unavoidable consequence of turn-based games like this, and at least you can defend yourself.

Most of the single-player modes in the game are pulled from the mobile edition, with a few nice extra challenge missions and a one-on-one gauntlet thrown in for good measure. The AI ramps up pretty fast, and this isn’t the sort of game where you’ll necessarily improve a great deal within the first few hours, so it can be a tad frustrating. But Quarrel gives your brain a good and proper workout, often challenging you to think outside the box a bit with your letter placement. And happily, the game accepts a lot of slang terms (including a few swear words!).

The biggest new addition for Quarrel on XBLA is the online multiplayer, the absence of which was keenly felt in the iOS version. The online lobbies are looking a little deserted at the moment, which will hopefully be rectified when word spreads further about just how good the game is. Once you get into a match, it feels like the most natural fit in the world, and absolutely trouncing an opponent online is as good as Quarrel gets. The pressure is that much more intense against real people, knowing that they’ll judge your intelligence based on the words you manage to play, and even being beaten is more satisfying when your opponent is clearly a proper wordsmith rather than an intelligent AI program.

Quarrel has launched at a wonderfully generous 400MSP price point ($6.60). For a game that will embiggen your vocabulary with its cromulent word-jumbles, it’s a bargain