Radical Entertainment, developer of the enjoyable free-roaming Hulk games have shed the shackles of a licensed character for an all new creation, Prototype - [PROTOTYPE] for the pedants. The result is a game that plays similar to The Incredible Hulk: Ultimate Destruction and the Spider-man games; a sandbox free-roaming action title with a huge host of new character abilities the freedom of new IP allows. You are Alex Mercer, a victim of science experiments gone catastrophically wrong that have left you mutated with a host of superhuman powers and an unfortunate bout of memory loss. New York city is a disaster area and you're restricted to the quarantined island of Manhattan. 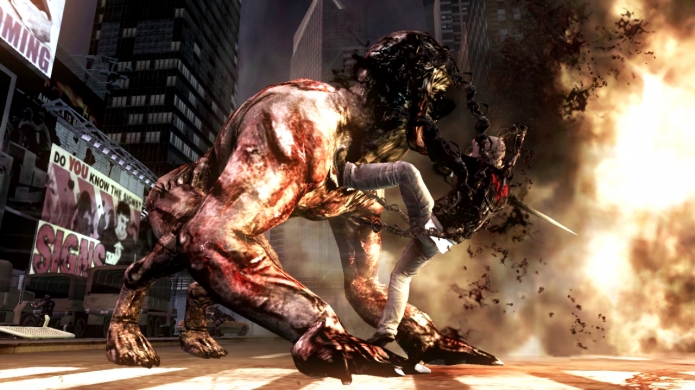 The game's fact sheet describes Alex as an anti-hero but even that's a tough fit since there's really no greater good on your agenda. You're essentially playing a villain, completely revenge motivated and devoid of any sympathy for the rest of the suffering population. Caught in the middle of a battle between military defence forces and a biological menace, both of which see you as a threat. That nothing to lose attitude sets the tone for the gameplay which is all about using your increasing array of mutant abilities in ways that promote mayhem, carnage and wanton destruction.

Mission structure follows the Hulk/Spider-man model - follow way points, watch a cut-scene, perform a task; nothing special. There are also side-missions you can do for a bit of variety or to grind your character's progression. Progression is handled with experience points that are dolled out as awards for completing missions with bonuses given for the amount of mayhem you caused. Your primary ability is shapeshifting which also affords you superhuman strength, speed and agility - experience points are then spent to augment these via the main menu at any time during gameplay.

Alex's body is his primary weapon and the game offers many ways to make the most of your shapeshifting powers. There are offensive modes that give you claw like hands, a giant blade for an arm or the ability to extend tentacle protrusions from afar. Then there's defensive modes that let you create a hardened shell around your body to lessen the impact of attacks or a protective shield that completely blocks damage but can be depleted.

All these selective abilities come with trade-offs and balances, for example: Alex's armoured form offers improved resistance to attacks but slows his movement and disables his acrobatic abilities. Alex doesn't have web-slinging or flight to get around so acrobatics are your mode of transport. Manhattan is a big place and missions take you all over the island so it's a good thing that you can still get around reasonably fast by sprinting up the sides of skyscrapers and shapeshifting to glide from rooftop to rooftop.

Then you have "Devastator" moves, powerful special attacks that can be executed when you have an excess of health and use massive amounts of Alex's expanding biomass to hurl giant whips, spikes and tendrills at your opponents.

In case that wasn't enough, you can also use conventional weapons such as the assault rifles and rocket launchers of the military personal you dispatch of as well as drive their vehicles by hijacking APCs, tanks and helicopters. Your proficiency at these is similarly upgradable.

Of course, being a shapeshifter you can also assume the forms of other humans. The game only lets you take on one alternate form at a time but you do so by actually "consuming" them, which in addition to giving you a tasty health boost, rewards you with that person's entire memory and knowledge. As Alex's own memory is shot, consuming key citizens (and mutant enemies) is the path to finding out what happened and who is responsible. It's also serves as the game's stealth element - allowing you to assume the form of military personnel to avoid detection and more easily hijack vehicles and infiltrate bases.

So you have this vast array of abilities, accessible on-the-fly via a slick and intuitive control wheel interface. You can mix and match them at will and tear around Manhattan wreaking havok with this supremely cool feeling of evolutionary superiority, killing thousands of people and causing billions of dollars worth of destruction - this sandbox aspect is where the game excels. Unfortunately however, that's where the deserved praise of Prototype comes to an end.

As fun and feature packed as the sandbox element is, the storyline element just falls a bit too flat. The narrative is told through flashing cut-scenes as you sift through the memories of the characters you consume. The underlying story itself isn't particularly bad, it's just presented to you in a way that is difficult to follow and even harder to maintain interest in. Add the fact that Alex really doesn't give a crap about anyone and it's hard to see any of the characters and dialogue as anything but an obstacle to get to the next big battle.

The boss battles themselves also leave a lot to be desired. Some of these see you removed from the sandbox world and trapped in a single room. You know the kind, an "indoor" area with an abnormally high ceiling and sealed windows and doors that you can't exit until your foe is defeated. Others do take place out in the city but they're all very generic and uninteresting. One in particular is an incredibly frustrating marathon of chipping away at the boss' shield to get a few hits in, all the while fighting off constantly respawning minions. There's also one boss that is just a human -a special forces agent with a stun-gun. Nevermind the fact that you've been chomping humans like insects all game, somehow this guy can keep up with you and counter your attacks - it really damages that feeling of immense power you get in freeplay mode.

The visuals are nothing to write home about, either. That's not to say that it looks terrible, but with the likes of Grand Theft Auto 4, Assassin's Creed and Saints Row 2 in the sandbox game space Prototype is just a little underwhelming in the looks department. Couple that with the fact that the city is being consumed by a flesh-coloured biological menace making the environments all look rather sameish. You can also tell that the developers have gone to painstaking lengths to re-create Manhattan but given that everything about the story is so far outside reality, right down to the fictional "Blackwatch" military group, it all seems like a bit of a waste and may well have been better-off if set in a fictional metropolis.

Also worth a mention is that Prototype boasts being "one of the first games ever to support Neural 7.1 Surround Sound certified by THX". Whether this adds much to the value of the game is debatable -- particularly since the vast majority of both PCs and consoles are only rigged for stereo sound -- but it is nice to see advancements in the videogame audio space.

All said, Prototype is still worth checking out for the sandbox element alone. If you're the kind of gamer who doesn't necessarily need clear goals or objectives and just enjoys a bit of a mindless destruction then you'll probably find some value here. There's no multiplayer component or other game modes though, so unless you're into the "collect the 200 tokens scattered around the map" thing, longevity beyond the storyline and side-challenges is limited. Our recommendation - a good candidate for a rental.
Follow Us
Latest Reviews
More...
News Feed
Advertisement
Latest Threads
Log In
Create Account | Lost your password?