No doubt since PlayStation All-Stars Battle Royale was first announced you’ve noticed the surface similarity to Nintendo’s Super Smash Bros. franchise. Both series feature a cadre of popular characters from the platform in question, each almost a flagship mascot in their own right, with a robust four-player versus component making for countless hours of fun and frantic action. It’s not really that much of a logic leap.

Where the two differ are PlayStation All-Stars Battle Royale’s razor sharp graphics on both console and the handheld versions and the surprisingly deep strategic element to gameplay. It could have easily been dismissed as a mere clone as many initially, including this reviewer, assumed it would be. Delving deeper beneath the surface reveals this diamond in the rough with broad based appeal to sate both the casual button masher and legitimate fighting aficionados.

There’s not really much to it as far as storylines go in the single player modes. You pick one of over a dozen characters, watch a slideshow introduction to each bout as it slowly raises the difficulty and number of opponents until you’re playing a bot-match version of the four-player battle royale complete with power-ups and hazards and a simple scoring system at play adding two points for a kill and subtracting one for a death with the highest score victorious. This eases you into the multi-player and allows you to get accustomed to each character and pick who suits your style of play. You then work you way to the obligatory final boss battle against PlayStation’s discarded American mascot Polygon Man. Cue credits, start again, pick a new champion, rinse, lather and repeat.

Gameplay is both accessible and layered. There are no health bars, rather a meter under your character’s name which fills up as you layeth the smacketh down on your opponents. You’ll use a combination of standard attacks, counters, throws and blocks (either on the ground or mid-air) to do so. Once filled you have access to three varying levels of super moves. These are radically different for each character and you’ll need to test them all out extensively to work out the best situation to use them. The highest tier is where PlayStation All-Stars Battle Royale really puts its stamp on the fighting genre with each suiting its namesake character perfectly.

BioShock’s Big Daddy turns the entire level into an underwater theme park where his hefty girth keeps him grounded as adversaries float aimlessly. Heavenly Sword’s Nariko uses her chains to bring swift death to any she grabs. God of War’s Kratos uses his massive sword to send enemies to Hades’ warm embrace and inFamous’ Cole McGrath either gusts a tornado your way or electrifies you into All-Star BBQ depending on the morality you’ve chosen.

The character’s moves are all well thought out and in keeping with their original games and play styles with Uncharted’s Nathan Drake one of the real surprises to play through. The same could be said for the lumbering Big Daddy or the astonishingly agile Fat Princess and I wholeheartedly recommend you work through each, as they don’t always play out how you’d expect. The only real detractor came from the AI controlled opponents who do get incredibly cheap in the later sections, which could frustrate casual gamers.

Each campaign lasts under an hour depending on your proficiency and considering the extensive cast of characters at your disposal knocking each one out should keep you going for hours on end and then there’s the combat trails to hone each character’s abilities too boot. But this is merely your training ground, young grasshopper. Once you know Kung fu you can bring the pain across the couch or over the Interwebs, which is pretty much the reason you’re going to play, and keep playing this bad boy till you wear your thumbsticks out. It’s pretty much the same gameplay with a limited respawns mode, last man standing and free-for-all, just sub in live players for the CPU. Venturing online is silky smooth with off the charts replayability making this once hell of an attractive package. 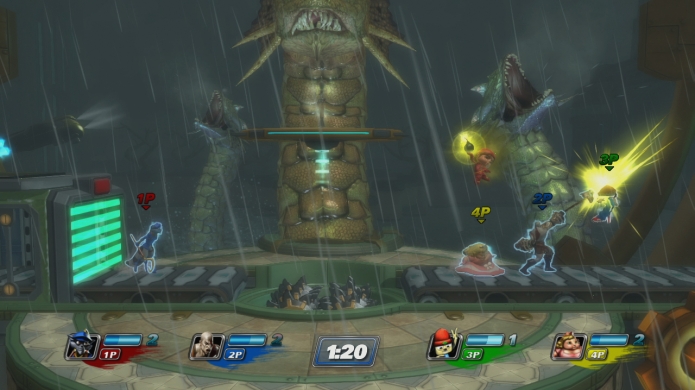 I’ve got to make mention of the cross platform functionality with those purchasing the PS3 version given a code to download it onto their PS Vita free of charge. This is a fantastic idea and the game loses absolutely nothing in translation the only difference being power-ups are collected via the touch screen (albeit a much more accessible option). It’s the perfect on-the-go game with a quick round at your fingertips at any given moment.

Other than the Buzz franchise, and the brilliant You Don’t Know Jack on ye imports, the PlayStation isn’t really known for its party games… until now. Do yourself a favour this Friday and grab a couple of mates, invest in four controllers, knock back a case of brewskies and work that arse groove on your couch as PlayStation All-Stars Battle Royale is going to keep your interest for a quite some time.
Follow Us
Latest Reviews
More...
News Feed
Advertisement
Latest Threads
Log In
Create Account | Lost your password?