Call of Duty’s online matches can best be described as a small skirmish, while Battlefield’s are aptly defined as, well, battles. But only one game can deliver a full-on, continent-spanning war with thousands of players -- Planetside 2. Finally delivering on the promises the original could never accomplish with 2003 technology, it has taken nine years of hardware, network and software development before an online shooter of this scale could be realised. It’s a remarkable accomplishment, solving the unenviable task of merging MMO player numbers with FPS mechanics and, despite a few compromises, offers a scale of combat never before seen in gaming.

Each server holds 2000 players simultaneously, but to make things a little more manageable they’re spread across three separate continents. That still means you can potentially see battles filling valleys and mountains with over 600 players at a time, but in reality the biggest battles I’ve taken part in were a couple of hundred people. These battles are simply jaw-dropping in their scale, with wave after wave of infantry backed up by hovertanks, transports and overhead fighters. After playing Planetside 2 even the mighty Battlefield seems a little timid, though Planetside 2 has had to make some compromises to allow so many players. 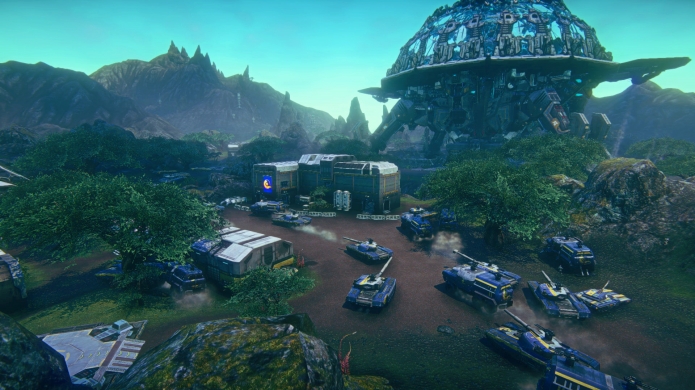 It’s a stunning game to look at, but the attention to detail has been paid to the environment and lighting effects more so than player models and vehicles. You’ll also need a beast of a CPU to run everything on max in the most hectic fights, with my 4.5GHz i7 3770K-powered PC often dropping down to 45fps during especially crazy battles (it stuck at 60fps most of the time though). The scale of the fights is matched by the scale of the world, with an environmental draw distance of several kilometres. Player and vehicle draw distance is dynamic though, dropping as more people enter a certain area, yet it’s only noticeably during huge fights. But boy is it noticeable when it kicks in -- during the worst moments you’ll see enemies pop into existence a mere 50 metres away, and this could be a deal breaker as larger battles become more popular. Fingers crossed a solution is on the way. Thankfully most fights are well within the capabilities of the engine, so this infantry render distance isn’t a problem most of the time. A full day/night cycle combines beautifully with the game’s dynamic lighting; you’ve never seen anything quite as stunning as a bombing run on a convoy in the dead of night, with each hit lighting up the surrounding area.

Each continent is around 5km by 5km in size, and scattered equally throughout are giant fortresses, surrounded by smaller outposts. Each fortress usually has a wall full of turrets defending it, and taking one down requires plenty of teamwork over several hours to make it happen. Thankfully the game supports squads of 12, which are then grouped into platoons of 48, and a perfect VOIP system means you can chat to anybody you feel like. You can even individually adjust the volume of certain players, and the proximity chat channel means you can listen in to enemy conversations.

The first Planetside was a laggy mess for Aussies, but the deployment of a Sydney-based server has crushed these lag-demons. The game runs without any sign of warping, even when the brown stuff really hits the fan. Firing a weapon feels as responsive and accurate as any other shooter, though the feedback loop isn’t quite as satisfying due to the toned down weapon effects. PhysX support adds some lovely sparks to bullet strikes, but there’s none of the destruction offered by Frostbite. Not that you’ll notice, as you’ll be too busy picking your jaw off the floor as you watch 30 enemy tanks backed up by heavy bombers heading towards you. 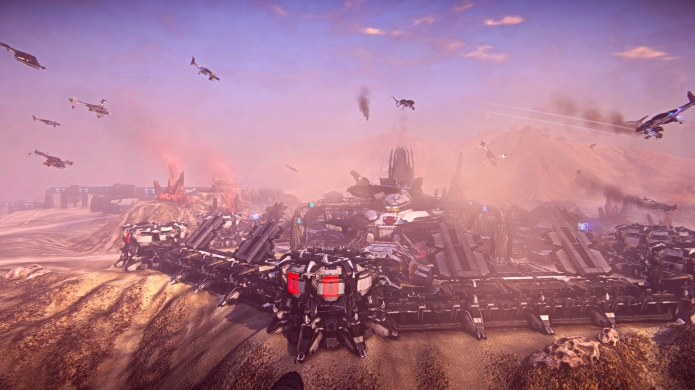 A simple meta game sees each area contributing certain assets to your faction. The more of a certain asset you have, the more tanks, aircraft or weapons you can build. There are three factions in all, each with very different strengths and weaknesses, and it will take months to master their extensive armouries. We HIGHLY suggest watching the video tutorials here before you play your first game, as the learning curve is actually a learning skyscraper.

Did we mention that Planetside 2 is free to play? Well, it is, and they’ve gone about it in a rather fine manner. Rather than cash being used to unlock upgrades, it can only be used to buy new weapons or XP boosts. To get the really good stuff, such as new sites, suppressors or ammo types, you’ll need to use Cert points, which are gained as you get more XP. While paying players ($15 per month) will end up with better toys faster, even those who play for free won’t feel underpowered. Unlocking gear through XP takes much longer than other shooters, with a red dot sight taking three hours, and a heavy weapon a good 15 hours or more, but this should help keep the game alive longer, as players can’t just burn through all of the content in one month.

The launch of the game has been a bit rocky for Aussies, with the local server crashing more often than it’s been up, but the developers have been working on the problem non-stop, and communicating every hour or so. As of today things are looking pretty stable, to the point where now is a fantastic time to jump right in. There’s only one AU server right now, but it looks like there are seven more ready to roll out as player numbers increase. 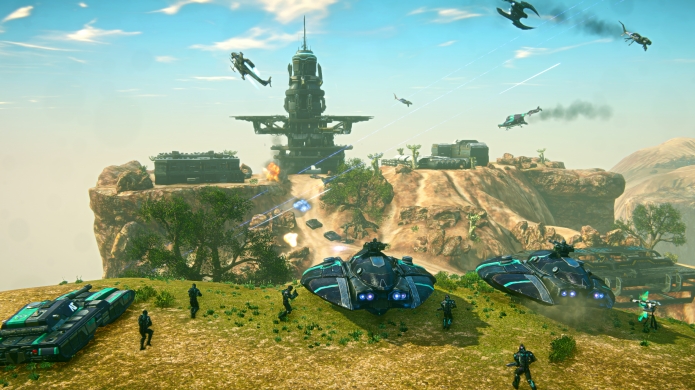 There really is no excuse not to try Planetside 2, especially as the only cost is your gaming time. Be warned though, this is a very addictive game, and it could spoil your previous favourite shooter with its incredible sense of scale. It’s astonishing to see a free to play game deliver such a polished package, that also breaks new technological boundaries. If it turns out to be as popular as we think it might, we wouldn’t be surprised to see the likes of Battlefield and Call of Duty head down the MMOFPS path in the future. Highly recommended, and one of the surprise hits of the year.
Latest Comments
No comments currently exist. Be the first to comment!
Commenting has been locked for this item.
Follow Us
Latest Reviews
More...
News Feed
Advertisement
Latest Threads
Log In
Create Account | Lost your password?