Patapon is unique. Part RTS, part rhythm action game, part one of those fruity Italian animations they used to play on the ABC in the 80s, it presents a game world that is stark, appealing, and utterly mesmerising. This is appropriate, for you are a god who controls his chosen people with music. The twist is, as you master the drum beats that control your troops, you yourself are drawn in to a hypnotic world of rhythmic order.

These beats are entered via the face buttons in simple 4/4 time, each one corresponding to a different order. For instance, 'Pon Pon Patta Pon' will order your troops to attack, while ‘Patta Patta Patta Pon’ will spur them forward. After you unlock the Chakka and Don drums you can enter more complex commands, but you must never break that steady jungle beat. Keeping it boosts your attack and defence multipliers, but breaking the chain will sap your Patapons' morale. 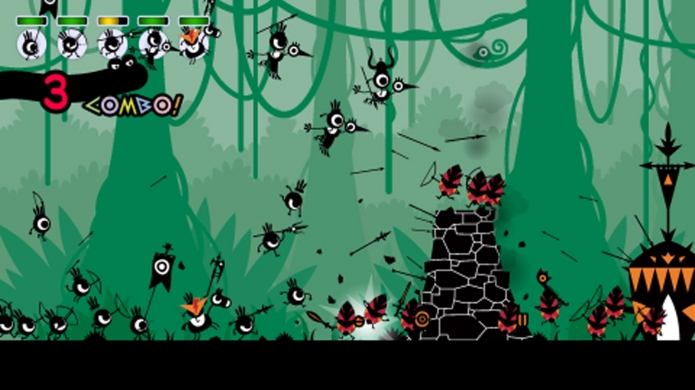 Taking in the rapidly evolving events of the Patapons' world is simplicity itself. Units and buildings are outlined in black, and coloured in where necessary to indicate rank and allegiance - the enemy, naturally, are red. Backgrounds are formed from soft shapes and pleasing pastels; atmospheric, but unobtrusive.

Minimalist caricatures, your warriors take utter delight in victory, and wallow in despair at defeat. They're rendered quite small on the screen, allowing for a sense of scale - huge monsters and towering fortifications have a solid visual impact. One aspect that is simultaneously adorable and chilling is that they all sound like children. Really, really little children, singing along with your war drums like they were performing at a primary school music festival. It certainly convinces you of your ability to rule them, but also brings to mind the not-at-all-adorable usage and abusage of child soldiers in Africa. Sure, wars have always been fought by the young - but it makes you think. Only for a moment, of course, as the 'violence' in this game doesn't come within shouting distance of a Road Runner cartoon.

It's not just the style, interface, and sense of humour that set Patapon 2 apart. It's also one of a handful of RTS games that makes a proper distinction between strategy and tactics. There is a tremendous amount of flexibility for kitting out your squads, with a huge range of weapons, shields, helmets, and so forth. There are many unique items to be found, too, conferring their own powers and bonuses. After selecting what mix of units you'd like to take with you into battle, you can either painstakingly assign all their equipment manually, or just press triangle to optimise, and give them the best gear you've got.

But once you've deployed with your chosen units and equipment, you're stuck with them for the battle.

You can advance, or hold your ground, but if you've got the wrong forces for the job then all the Congo-Bongo beats in the world won't be able to save you. This distinction between prep time and implementation is not just a realistic brain teaser, it's also an efficient use of the PSP's resources. For while it may tower over the DS in the fields of graphics and sound, it is still ultimately a handheld. Even if you could fit Supreme Commander on the PSP screen, there's no way you'd be able to concentrate on it while riding the bus.

Patapon veterans will feel instantly at home, for the code base, sprites, and most of the music and animation have been recycled from the last game. You can import your old save data, too. Rather than a radical re-invention of the franchise, this sequel simply offers more of the same: new kinds of units, including a customisable hero character and flying cavalry, plus some multi-player modes, and plenty of new levels to conquer. Some succinct tutorial levels open the game for the benefit of newcomers.

Ultimately, this is a deceptive product. It looks infantile, but it's epic in scope. It's no cakewalk, either - even on the easiest setting, you can still expect to get spanked if you make a wrong move. For while the Patapons obey you, you must obey the drums - Patapon 2 makes you a slave to the music.