The secret to Overwatch’s success, and why it appeals to a broader audience than similarly themed competitive team shooters are numerous and varied. For one the hero approach, and by that extension the colourful cast of characters within the game, lend themselves to an impressive number of fun and distinctive play-styles. You’ve got the twin-shotgun-pistol-wielding Reaper who can go all smoky invincible to creep up on enemies. You’ve got the giant mech-meets-norse-mythology of Reinhardt, a melee character that can hide himself and teammates behind a giant plasma shield. And then there’s the six-shooter wielding McCree who can fire off all six shots so quickly that it can wipe out most characters in the blink of an eye.

And with 21 heroes to choose from, the number of choices can initially seem a little overwhelming. Especially when each character oozes insane levels of personality. Given time it’s virtually impossible for someone to play Overwatch and not feel a deep attachment to at least a couple of the heroes. For me it’s weird combination of D.Va, Torbjörn, Lúcio, and Roadhog. And the act of choosing who to play as can feel a lot like choosing which superhero you want to be for an afternoon. Which makes hero rotation something more than simply switching classes. Each hero has their role. And each role feels substantial. 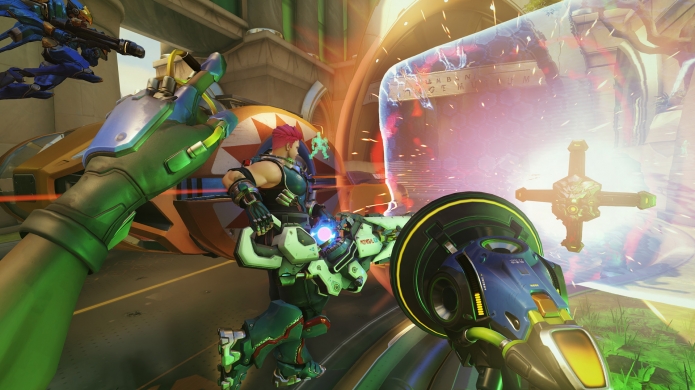 Choosing to play as Lúcio 0n a Control map like Lijiang Tower (which are essentially Overwatch’s versions of King of the Hill encounters) is not simply a matter of being the team healer. No, it’s about using the power of electronic beats to heal wounded friends. Creating a bass thump to send foes flying over rails. And wall running to dodge incoming enemy fire. Using speed, verticality, and beats to keep everyone alive whilst avoiding the natural attention that being a healer usually brings.

It’s hard to deny the immediate sense of cohesion, detail, and variety amongst Overwatch’s heroes. The sheer number of different hero combinations for any given scenario is commendable, but so is the way the game reinforces and makes you feel like what you do matters. But perhaps the real secret to what keeps you coming back is the way Overwatch rewards teamwork, performance, and tracks match progress. Yeah, a weird part of the game to highlight but one that’s worth talking about.

For those that have played an online shooter in the last decade or so you’re probably aware of the standard k/d ratio thingy that has become the way in which performance is measured. Or the press a button to see the current standings deal, track how many kills you’ve got and how that relates to everyone else in the game. And perhaps, if you’re doing great check to see who’s lagging behind and needs a few words of ‘internet encouragement’. In Overwatch there’s no current standings to gloss over. All you get is a snapshot of your performance, and a medal to let you know if you’re leading in a certain category. 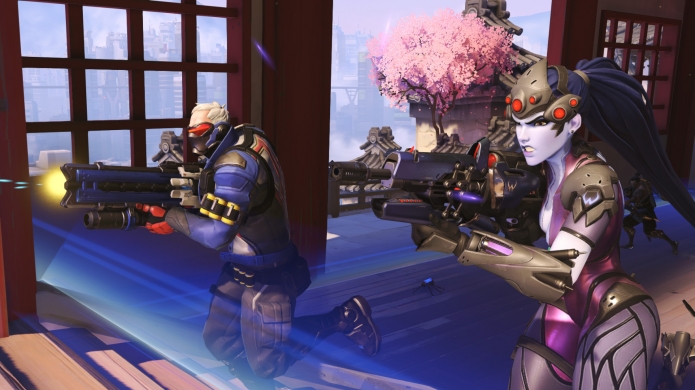 So instead of who got the last shot on an enemy determining who gets the credit, you’ve got eliminations. Getting a hit on someone and you’ll score an elimination, with an overall percentage meter of how much damage you contributed to someone’s momentary demise displayed on-screen. This may sound like a minor feature in an overall brilliant game, but it fundamentally affects how you approach each match. It’s the sort of clear design choice that places an emphasis on teamwork, meaning that funnelling someone around a corner into the sights of a more powerful teammate results in you both getting credited with an elimination. And this extends to the various other statistics that are tracked, from healing, to damage dealt, to damage blocked or absorbed.

And doing any of these things in succession without dying will lead to your character going on fire, NBA Jam-style. This clear focus on match statistics and mechanics being in service of player performance within an overall team is to put it simply, a masterstroke. And one of the fundamental reasons that make Overwatch a joy to play. Especially for those that aren’t as competitively minded as others. And it’s almost enough on its own to propel Overwatch into becoming a mainstream success and online mainstay.

Is it wholly original? No. But like with any Blizzard project, it feels like it is. Kind of like what the developer managed to do with the original Warcraft in the ‘90s, or more recently with World of Warcraft. In the case of Overwatch, it takes the core concept of something like Team Fortress 2 from Valve, and runs with it. Sure, it’s still very much a class-based shooter, but there are also elements of MOBAs, and even some Street Fighter when you think about it. Which is to say that highlighting individual performance and skill hasn’t been diluted in the slightest. In fact, it’s probably more prominent in Overwatch than it is in other similarly themed shooters. Because after all, what’s the point of being in control of a cool looking hero if you can’t take some credit for pulling off a few sweet moves. 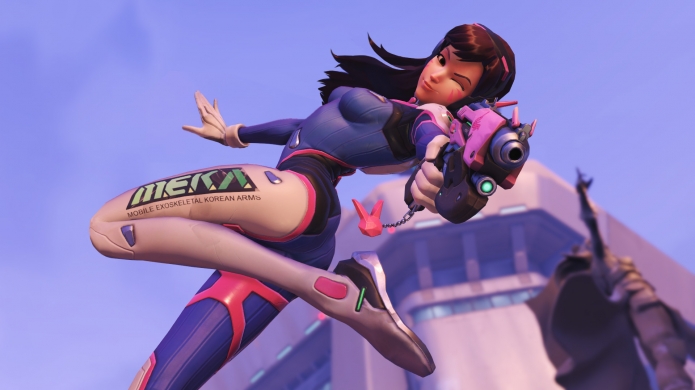 The most obvious example of this is the Play of the Game highlight reel that follows each match, showcasing someone’s particularly impressive skills. And for the most part it works like magic. Based on an algorithm of some sort, it does stumble every now and then and display a Torbjörn turret kill streak with him being nowhere near the action. But the fact that 9 times out of 10 the particular Play in question is worthy of a highlight, means that this is another small but crucial part of the Overwatch success story.

But beyond that clear example, instead of the usual ranked standings at the end of each match the game chooses a selection of varied performance cards for everyone to vote on. Ranging from the aforementioned Torbjörn turret kills to the amount of damage blocked by Reinhardt’s shield to the number of direct rocket hits by Phara, just about every facet of each character is catered for. Leaving no play style or strategic choice out in the cold. And the sheer number of people that choose support-related performance cards as their favourites in the post-game countdown points to the overall success of this sort of approach. And it’s another reason Overwatch will become a mainstay in the increasingly populated online shooter market. If it isn’t that already.

But enough about the statistical beauty of Overwatch, let’s wind the clock back a bit. 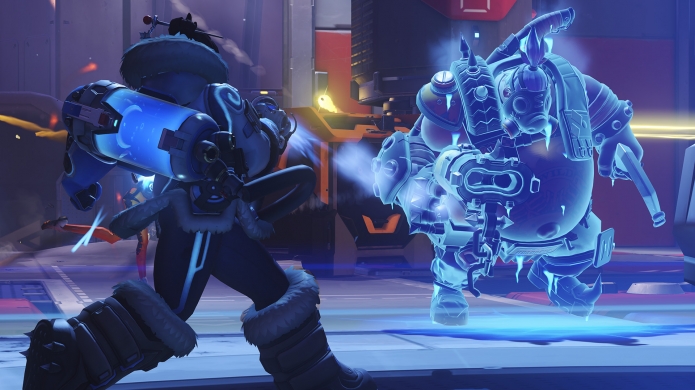 When Overwatch was first announced at Blizzcon in 2014, it looked like an interactive Pixar film. Albeit one where the characters got to shoot at each other. The sense of world-building in its futuristic setting where man and machine exist in a state of conflict, was instantly recognisable whilst at the same time feeling like a fully realised fictional world. With word that it was created from the remnants of Blizzard’s recently cancelled but long in-development Titan MMO, this put Overwatch in a unique position. As to the extent of what carried over from Titan to Overwatch, who knows. But as with anything Blizzard, if it was just the setting then already Overwatch was positioned in a way as to set itself apart from other online shooters.

For one Blizzard has a knack for creating worlds that you want to spend time in. And the world in which Overwatch takes place is no different. Sure there’s no story mode or campaign to speak of, but with a series of wonderful animated shorts featuring the Overwatch heroes, impressive comics, and lore readily available, none of it feels superfluous. Even though as an online shooter with capture point maps and maps that have one team push a payload from one side to another, all that probably should.

The comparisons to Team Fortress are fair. Because hey, capturing points and pushing payloads in a specific role is what you do when you play Team Fortress. And in all fairness that’s pretty much all there is to Overwatch. If you were so inclined to sum it up that way. But the setting, the characters, the world, the maps, the art direction, the music, the borderline genius sound design and audio cues, the animation, the sense of cohesion with a cast of characters that currently sits at 21 distinct heroes, are all polished to such a degree that it’s hard to fault even a single thing without feeling like you’re simply nit-picking. 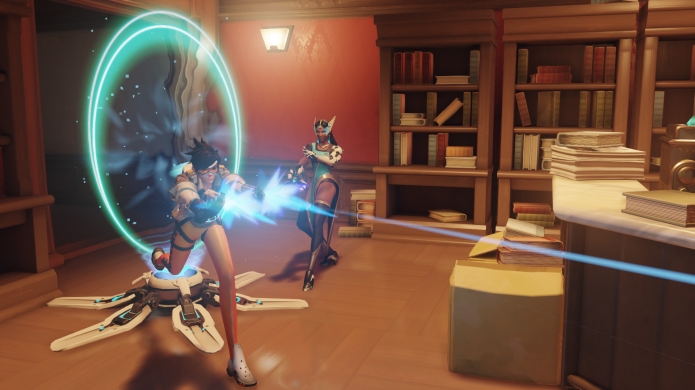 And much like with other online experiences, once you’ve had a few intense and close rounds where you feel like you’ve contributed towards victory, you’ll be hooked.

There’s something to be said about a game that does one thing well, and in the realm of online shooters that’s more important than tacking on a string of different modes or story content. Looking back a decade or so to classic games like Quake 3 Arena or Unreal Tournament, these were games that accomplished what they set out to do. And when you get down to it you could probably add Overwatch to that list right now, a stellar online experience that feels familiar yet still entirely new. It takes something that people have enjoyed for a number of years, appeals to fans of the online shooter genre whilst also adding a layer of inclusiveness to makes it fun for casual players too. And for a Blizzard release, what else could you ask for.
Latest Comments
Link