Expectation can be a road to disappointment. With so much chatter surrounding Outlast’s reported scariness, I approached it apprehensively, perhaps with a little doubt. True horror is difficult to do well, after all, and comes in many different flavours. Fifteen minutes into Outlast, I had experienced two genuinely jumpy moments. Moments that set my heart racing and offered anticipation for what the game would be like to play.

Outlast’s central pillar is its passive approach to play. You can’t fight back. In tense situations, your only options are to run and/or hide. All the while, you’re expected to do this with your trusty hand-held camera up to your eyes, to record every moment. The camera provides a conduit between the player and Outlast’s grimy, horrific world. Whenever it’s held up, the world becomes slightly grainy and surreal, even more so when you must enter pitch dark and turn on the camera’s night vision mode. Tension comes from the dreadful anticipation of something jumping out at you, combined with the fast depletion of your camera’s battery power in night vision mode. Because this is a videogame, you’ll find batteries scattered about in unlikely places, but look not the gift horse in the mouth, as the dark is no fun place to be. 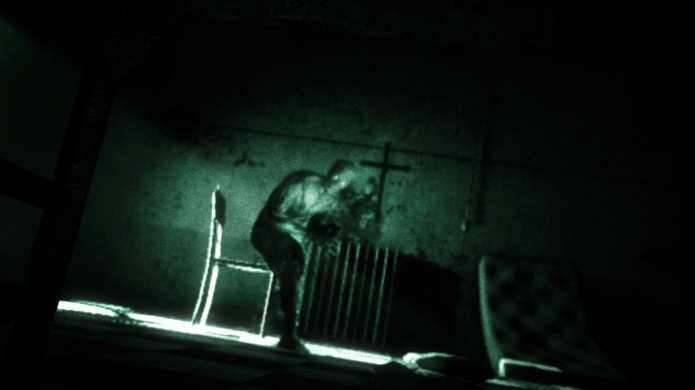 Outlast’s opening two hours are fantastic. The asylum is just the right kind of scary – a massive warren of rooms and sweeping wings with prison-like security mechanisms that act to keep you going down certain linear (scare) pathways. Things very much go bump in the night and there are a handful of genuinely scary moments. The first time you hide in a closet, watching through the thin grates as a half-human creature hunts about for you, muttering devilish things to itself, is both thrilling and terrifying in equal measure. So too for Outlast’s few ‘gotta-keep-running’ moments; they’re extremely effective because they force you to sprint forward with no idea of which way to turn, looking for slightly open doors, hoping they won’t lead to dead ends.

Where Outlast stumbles – just like a terrified victim running from a bat-wielding maniac – is in its predictable game design. The first time you come across a main objective that requires you to seek out two valves within the dark, dripping maze of the basement it’s fair enough. This is a horror game, you reason, but when a pursuer appears just as you turn the first valve, you start to realise that the scares can, for the most part, be entirely predicted. It becomes a case of thinking, “Should I expect that guy in the wheelchair blocking my path to scream and reach out at me at the last moment? Yeah, probably.” And then it happens. There are far too many repeated design modes, so that you’ll come across the “turn two valves” and “this requires a key” moments over and over again. It makes the game feel a little lazy and unimaginative. 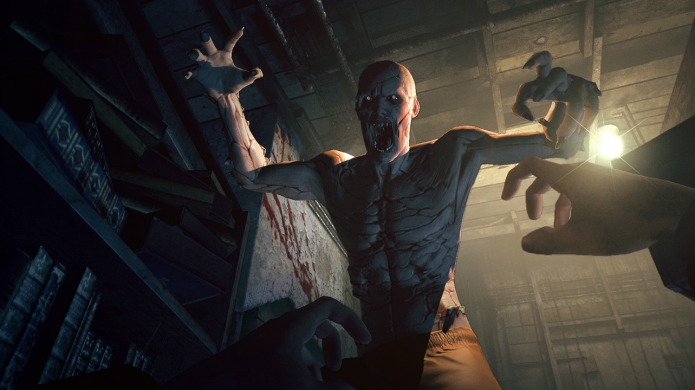 A second reason for Outlast’s diminishing horror is that the enemy AI is broadly unintelligent. They operate on two modes: patrol and chase. There’s no point in trying to stealth around them as they seem to be psychic as to your proximity. This gives you two ways to play: be passive, run and hide every time (which is obviously how you’re supposed to engage), or get aggressive and run at them every time. Taking the latter approach, I was able to sprint through just about every situation, leading each weirdo on merry chases, eventually finding where I needed to go. You can take around four or five hits before dying, so it doesn’t matter too much if you get a little stuck on occasion. Some situations needed a large cabinet pushed out of the way of a door. It was simply a case of catch-me-if-you-can, push once, run about, push some more and then escape.

It’s also possible to cheat the game’s checkpoints a little, such as putting all your efforts into turning on one valve and then dying, to be reloaded into a blank redo where that valve has already been turned and the patrolling monster is off somewhere else. Once these design elements are illuminated, Outlast becomes far less scary and much more puzzle like and exploratory. There are still tense moments, but it does start to feel like you are jumping through some very small and tightly prescribed hoops. Still, the experience is engaging enough that you’ll want to stick through to the end. I just wish that the parameters of exploration could have been widened, because I found Mount Massive an intriguing place to be.

Although technically a passive protagonist, you are able to do quite a lot – such as climb, vault, push objects, squeeze between gaps and crawl. This imbues Outlast with a heavily physical flavour, turning each chapter into a large navigation puzzle. I was also impressed with the implementation of the protagonist’s body. Each time you approach a door or opening, Miles’s hand comes up to grip the edge. You also see your body and legs when you look down. This adds to the narrative depth – such as it is, told mostly through discovered files and personal observations – as certain storytelling nodes make an impact on your physical appearance. It reminded me a lot of the way in which Condemned made the effort to firmly place you inside a body. Perhaps this kind of grounded internalism – seating you deeply into a moulded perspective – is essential for good horror gaming reality.

For the most part, Outlast lives up to its reputation. Although a little too quick to link gore with horror for my liking, it rests upon wide foundations of creepiness and builds on them with a good amount of tension and urgency. More intelligent enemies and less eye-rolling predictability would have made this one of my favourite videogame horror experiences.

Dylan Burns enjoys third-person shooters (Max Payne 3, Resident Evil 4 and Alan Wake in particular), adventure titles and anything with a strong narrative focus. Exploration in games is important to him, but he's not too worried if the action is heavily directed; it's important that a story gets told. Dylan loves all gaming platforms but is in love with the Vita of late, both for replaying recent classics (The Walking Dead, Hotline Miami) and the exciting possibilities of PS4 link support. When not writing about games, he is focused on writing fiction. Dylan has completed two novel manuscripts in the last two years and is partway through a third, with hopes of securing a publisher soon.