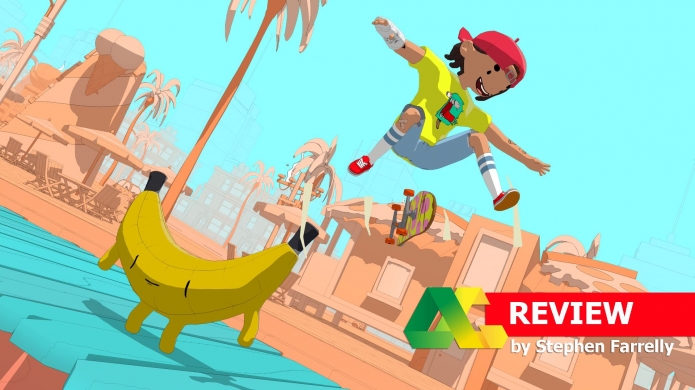 Charm isn’t often an overall trait by which games are wholly judged in the review process. There’s a lot that goes into considerations across numerous aspects, and obviously it all needs to coalesce in harmonious ways to reach the higher tiers of critical adjudication, but every so often a game comes across a reviewer’s desk that just oozes with a sort of style. The kind of game whose total presentation bleeds cool. A sheen and delivery of rad, if you will. Where that aspect becomes more than just an aesthetic tick in the creativity department, and features more completely as a pillar of the game’s actual workings and mechanisms. A triumph of total design.

OlliOlli World is such a game.

Much has been said of this game’s renewed style and presentation in the face of its earlier incarnations. And as alluded to above, it’s more than just a new coat of cel-shaded paint. The 2.5 world skatepark crafted here for players is deep and layered. It becomes more and more complex the further into the game you get, while its challenge and Challenges amplify in a cadence that feels tenfold each new world you unlock. There’s a steady learning curve with OlliOlli World early on, that is both appreciated and annoying at the same time in that the game doesn’t rush you to the one million-plus score goal line, but also takes its time in revealing all of its skating secrets. So when you finally learn to manual in Cheapside, or perform late tricks and switch grinds, about three-quarters of the way through the adventuring side of things, you’ll feel short-changed in the lost scoring opportunities you’ve left in your skater dust. (Of course each world is entirely replayable -- a part of the game that is actually encouraged, but please, allow me my cloud for the minute.) 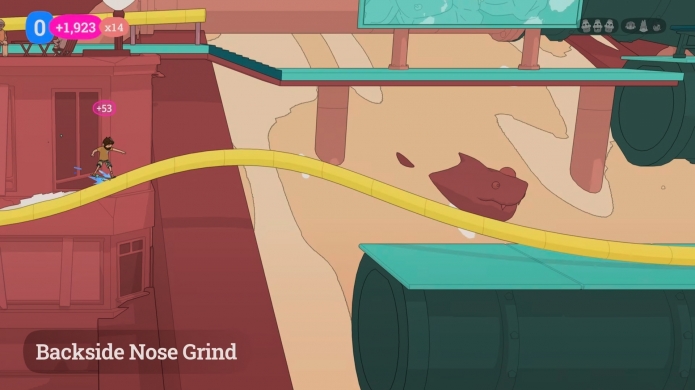 From this, the game’s makeup is pretty simple, and follows a familiar progression formula to the one perfected in the OG Super Mario Bros. games. That is to say the game-world of Radlandia is split into five different biomes, and within each biome the player progresses through levels (or, courses). You do this until you reach that biome’s ‘boss’, beat them (in the case of OlliOlli World you’re just finishing the boss level), then unlock the next playspace. Moreover, a handful of courses within each biome feature specific challenges to complete which unlock new areas or reveal hidden parts of the game. See, simple.

"Each course comes with a series of Challenges that can be attacked if you so choose, and these range from avoiding inflatable bananas to making sure onlookers near a waterfall are suitably entertained by your antics...”


Completing each course is actually pretty easy, and that’s because at a base level, OlliOlli World has your back. No matter your skill level, this is an entirely finishable experience and can be knocked over in about two or so hours, depending on your level of ability. But, OlliOlli World is only easy in its most default setting, and the game allows you to choose your own level of involvement. Each course comes with a series of Challenges that can be attacked if you so choose, and these range from avoiding inflatable bananas to making sure onlookers near a waterfall are suitably entertained by your antics (with heaps more like these creatively frustrating you throughout your journey). Challenges also scale the deeper into the game you get, and obviously beating all of them is the game’s real meat (or tofu) and potatoes. So taking into account Challenges, as well as other replayable aspects such as beating each course’s Rival score as well as topping the ‘Locals’, OlliOlli World’s seemingly quick playthrough can become a massive time sink in the best possible way. 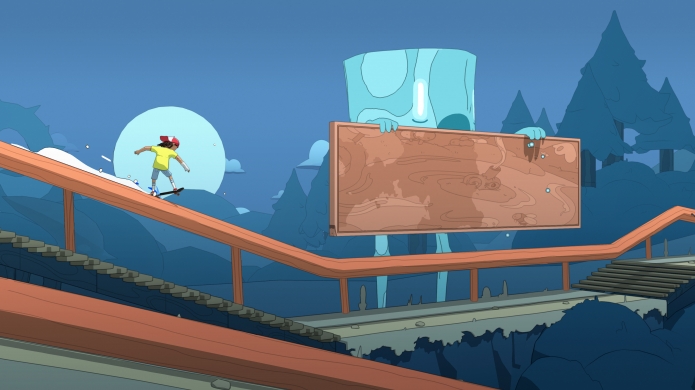 And in the later stages of your journey, some levels feature Challenges that seem almost impossible. At least impossible where stringing them into both a run and a high-scoring combo are concerned, but such is the charm of OlliOlli World. By the time you’re powering through one of the many spots in Los Vulgas, the game’s final area, actually trying to work out what even happened in that last run you did, you’ll just be happy you made it through at all. Each and every part of the world feels alive and entirely against you once you’re armed with all the skating knowledge Radlandia and its kooky residents can impart on you, and you’ll need this armament to succeed. Especially in tackling the game’s second phase of Challenge completion.

"Skaters who’ve shed their mortal coil, transcended material transition for ethereal kickers and exist outside the laws of normality...”


Oh, I should probably mention there’s a bit of a story here, too. OlliOlli World’s skating epic features your climb to status, deified. You see, this game-world is governed by five Skate Godz. Skaters who’ve shed their mortal coil, transcended material transition for ethereal kickers and exist outside the laws of normality. These cats are the real deal, but what the game readily explains is that they, too, were once like you -- up and coming and raw. A talent for the ages not seen since… well, since the last of the Godz ascended. And along for the ride is your Radlandia cheer squad. A ragtag group of skateniks who fill in the lore of the world of Radlandia for you, while also offering tutorial on the game’s mechanics as well as serving as Challenge prophets, to maintain a theme. And it’s fun. OlliOlli World’s story isn’t necessary or even required. It’s purely aesthetic and entirely skippable, but it’s fun. But when it’s applied in reason to the charm this review has lauded, it becomes something more.

I mean, who doesn’t want to know the canonical reasons behind Gnarvana? 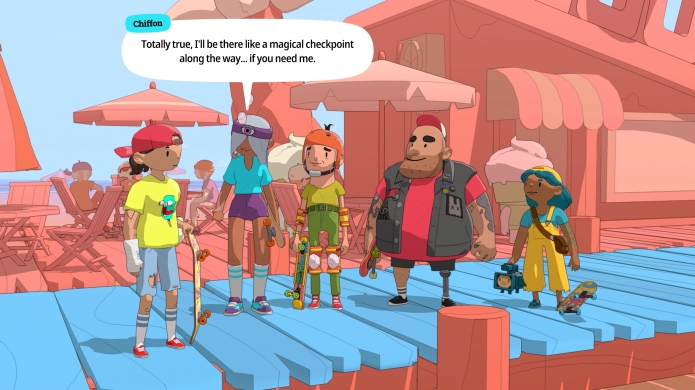 Once you’ve finished the game, you still have the option of maintaining status in the world as one of the living Skate Godz thanks to the Gnarvana League -- a seasonal team or group-based activity that’s all about community and high-scores (and bragging rights). But if you’re like me and don’t like other people, there’s also an option to basically play an Endless Runner-style version of the game, which procedurally-generates a map you can slightly customise in terms of length, style and difficulty. And all of this simply elevates the longevity of the game. On top of everything else is myriad unlockables and a robust character customisation system as well as the promise from Roll7 and publisher Private Division to continue to support the game -- and community -- post-release.

While we’re on the topic of charm, the game’s soundtrack is simply sublime. I’ve been pumping it ever since it was revealed who would be on it a while back, and it’s a perfect mix of chillbeat, trip-hop, synth and more. And the vibes the soundtrack creates permeate the whole affair, which adds to that charm thing I’ve been so vocal about. “Darling Gardens” by Liquid Lullabies and Adam Swim’s “Can’t Sleep” are absolute personal favourites.

And so what looks like a fun, cartoony jaunt on a skateboard, that can actually be played as such, early on, can also very quickly turn into a deep and unforgiving monster wrought with indomitable challenge and pedestal moments brought on by death-defying triumphs. It’s the sort of slowburn game communities build around, in league with titles like Super Meat Boy, the Trials series or Cuphead, to name a few. Games where challenge is key, but bragging rights are better.

And it’s charming, to boot.